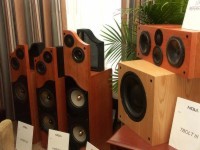 From the moment I walked into the Nola room, I experienced Déjà vu. The speakers looked familiar. That subwoofer looked particularly familiar. The driver, the enclosure. Where have I seen this before? Then I heard the NY accent from the reps in the room. I soon put two and two together, got five and realized this company had close ties with a previously well revered company known as Alon. Sure enough I was right and Nola spelled backwards is Alon. It turns out one of Alon's chief designers, Carl Marchiosoto, is on board with Nola and is responsible for the new Pegasus Reference speaker I had the pleasure of hearing at Alexis Park.

This was a most unusual loudspeaker design. It's a type of open baffle dipole/monopole design where the mid/high dipole portion is paired with sealed box enclosure bass drivers. By using multiple drivers in the design, it helps lower distortion and create a more uniform dispersion throughout the room. Because of the lifelike sound you often get out of line arrays, I am a big fan of this design approach. The upper bass driver is rear-mounted and firing upwards, operating in a dipole fashion. The twin mid bass drivers are forward-firing and located in their own sealed and isolated enclosures while the side firing opposing woofers are in a sealed enclosure. I have mixed feelings about the dipole integration since most dipoles I have heard sounded horrendous to me. Though, the dipoles I have heard were mostly limited to the mainstream big boxy brands found in every other page of the major print magazines as advertisements - most with glowing reviews quotes like " just buy them". Um, no thanks. Anyway, here I was listening to a second pair of dipole speakers today (the first being the Opera Tebaldi ) at Alexis Park that sounded absolutely marvelous.

Carl takes his design one step further in refinement by separating the crossovers into their own enclosures as he feels it helps minimize destructive interference of vibrations. Speaking of crossovers, Nola claims the inductor (which incidentally is a custom linear air core design) in the low pass filter employs over 17 pounds of copper! No wonder the crossovers sit outside the box cavity. Using a ball bearing system to isolate the bass enclosures from the rest of the drivers, the design goal for this is to eliminate mechanical resonance interference issues.

These speakers truly did sound awesome. They were very pleasing and effortless in their presentation. They had all of the good qualities of a full range tower that I am always actively seeking out in the high end world, but rarely find. We were listening to female vocals from an artist I cannot remember the name of, but who sounded similar to Diana Krall - only, in my opinion, with an even more melodic and refined voice. The Nola's lived up to the challenge and more. The bass was very well controlled and surprisingly authoritative considering the small side firing woofers which, at first glance, looked more ornamental than functional to me. These speakers were easy to listen too, they sounded real and very open. Though they come at a hefty price tag of $50,000 clams per pair, I would certainly be willing to eat a few raw oysters to test these babies out in my own listening lab. An excellent speaker and a must review product for 2006.