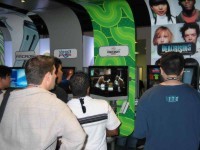 The ever popular game display garnered long lines and a lot of interest over in the Microsoft Xbox 380 booth. Attendees lined up to get a chance to try out the new game system. By far, the most impressive looking game was Fight Night which had more than one Audioholic jaw on the ground. The graphics were so smooth and convincing that even the movement of the fighters looked natural for the most part. We were floored at the look of the game. Unfortunately, the lines were long and the masses restless so we didn't get a chance to demo the game. If you know anyone with an Xbox 360, you've got to see this game to believe it.