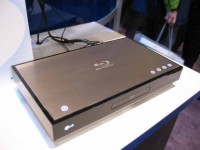 We were thoroughly impressed with the number of Blu-ray units on display at the booth. The popular line was that most of the players wouldn't be out until summer and that the Blu-ray disc recorders had no firm U.S. release date. Most of the units on display didn't have the Wow factor we were hoping for but that is to be expected with what we perceived was quickly ported source material. A few comparison units (one showing 1080p Blu-ray, the other showing regular DVD on a pair of Pioneer players) looked as if the DVD source material had be manipulated (either blurred on purpose or the connection was via composite). The DVD player was a Pioneer Elite model and they simply don't lack that much detail. Regardless of the obviously "slanted" comparison, we were excited about the upcoming release and look forward to testing out the new players. There was a display of current and anticipated titles on hand (for example Aeon Flux was shown even though it hasn't been released yet). We wanted to take a picture of one of us holding a title but they were glued to the table. With the Playstation 3 also utilizing Blu-ray technology, the future of digital media looks very… Blue. For more information, please visit www.blu-raydisc.com .