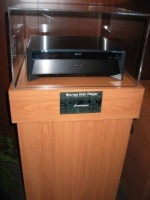 Sharp had on display a Blu-ray player from Japan. While we weren't allowed to play with it, it was nifty looking (the component on the top left). Earliest release date was an estimated 2006.

Sony also had a Blu-ray player on display - but it was under glass and under guard. The guard didn't look too happy to see me snapping pictures but what could he do. It says "Press" on my badge.