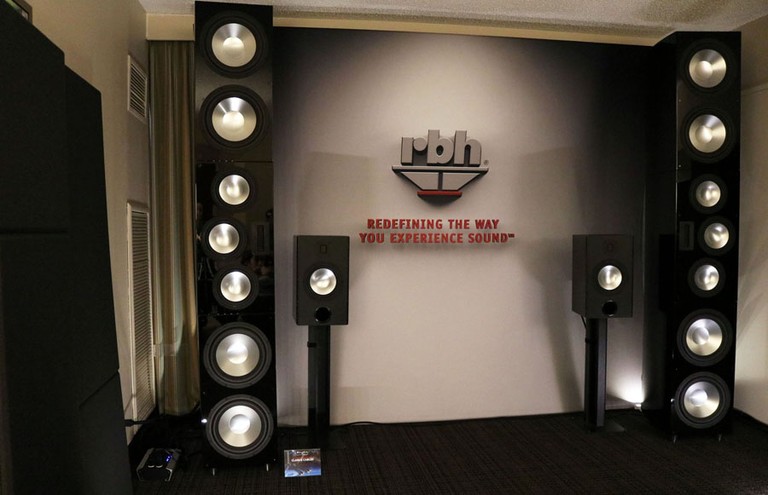 One of the highlights of the 2020 Florida Audio Expo was undoubtedly RBH Sound's unveiling of their new no-expense-spared SVTRS Active Speaker System. The SVTRS is RBH Sound’s new flagship that is supplanting their legendary Status 8T speakers. Any way you look at it the SVTRS is a lot more speaker than the Status 8T- at least on paper. The SVTRS has heavier-duty drivers, it’s a lot bigger, and it comes with its own amplification and active crossover. If all of that weren’t enough, it’s even  less expensive: $45k vs the Status 8T’s $50k. That's still a lot of dough for a speaker set, but you get one of the most formidable home audio speaker systems that money can buy. Let’s take a closer look at what is going on in the SVTRS to see what a cool forty-five grand can get you from RBH Sound.

As was mentioned, th

e SVTRS set comes with its own amplification, and what an amplifier it has: the 6α from RBH, which is a 6-channel amp that tri-amplifies the SVTRS speakers with 1,500 continuous watts/ch going to the subwoofer section, 500 continuous watts/ch going to the midrange drivers, and 250 continuous watts/ch going to the tweeter. That adds up to 2,250 continuous watts going to each speaker, and what's more, they are being powered by Pascal amp module, which is an extremely low noise, low distortion, and highly efficient class-D amplifier technology that ensures most of the current being pulled from your outlet is being fed to the speaker, rather than lost as electronics heat output. Further increasing efficiency is the use of an active crossover which avoids the losses of a passive crossover so that much more power is converted into sound. The crossover is being handled by Marani’s top-of-the-line LPP-480F processor with an advanced FIR filter system that keeps all drivers in phase at crossover points so there is no phase rotation as is seen in passive crossovers. This allows for time-alignment and crossover slopes between drivers that isn’t possible with passive crossovers.

The top-shelf amplification and processing of the SVTRS are matched by the firepower of its driver array. The SVTRS is a modular

speaker meaning that it has three sections per speaker that are assembled on site. Two sections are for the subwoofers and the other section is for the midrange drivers and tweeter. The midrange/tweeter section is sandwiched between the subwoofer section for a kind of gigantic MTM array. The sub sections are both ported with a giant 6" flared port and have two high-excursion aluminum 12”s; they are essentially a version of the SX-1212P/R subwoofer that we ran a review of some years ago, and that sub managed to achieve our ‘extreme’ bassaholic room rating, meaning that we felt it was able to handle rooms sizes of 5,000 cubic feet or more.  The SVTRS come with four subs that each on their own would garner our highest dynamic range rating. That is an enormous amount of low-frequency potential that digs solidly below 20 Hz. In fact, Gene recently measured an in-room response down to 10Hz (-3dB). These are true full-range speakers, but that is expected at this price point.

The massive dynamic range of the subwoofer sections is matched by the midrange/tweeter section. For the mids, the SVTRS uses three 8” aluminum midrange drivers (nearly combined surface area of a 15" driver) which should supply near-unlimited headroom in this critical frequency band. By comparison, most tower speakers use one or two 5” midrange drivers for this frequency range. We see three of them stacked vertically for reduced off-axis lobing on the vertical plane and a wider vertical listening axis. RBH refers to this driver arrangement as a dispersion averaging array. The tweeter is a large 4.7”x1” Aurum Cantus AMT which should have a major dynamic range advantage itself. As opposed to conventional dome tweeters that oscillate pistonically, AMT tweeters contract and expand the folds of a pleated membrane to produce sound. A major advantage of AMT tweeters is that the folds of the diaphragm are much deeper than they are wide. With this design, the air is ejected out at a much faster speed than the vibration of the diaphragm itself- as much as five times faster. This means that small oscillations in surface area translate in big sound. A 4.7” AMT should be able to stay very clean and distortion-free even at extraordinarily loud levels. Audioholic’s owner and senior Florida Audio Expo correspondent Gene DellaSala reports that exhibitors three rooms down were complaining that the bass from the SVTRS speakers was rumbling their rooms so badly they thought it might cause damage. They were quite literally rocking the place. Gene reports that the SVTRS speakers boasted effortless dynamics, clean deep bass down to infrasonic frequencies, and a huge soundstage. Audioholics will be doing a shoot out between the SVTRS speakers and RBH’s previous flagship Status 8T speakers, and RBH Sound is convinced that the new SVTRS speakers will come out on top. Stay tuned to Audioholics to see the results of our super-speaker showdown, as the winner will become our new reference system. The SVTRS active speaker system can be purchased through RBH’s dealer and distributor network and will soon be also available for order from RBH’s website. Do make haste in auditioning a pair of these speakers if you're on the market. RBH Sound will only be producing a 21 pairs to commemorate 45 years of being in the speaker business. Gene having the first set means there are only 20 more select pairs available to the public. If you become a proud owner of the SVTRS system, RBH will fly down to your place to personally tune them to your room at no additional cost.

Schrodinger23, post: 1498989, member: 81322
I agree. But his new mains are 30 times the cost of mine that have Raal ribbons tweeters. I guess if I throw in my subwoofers, they are only 10 times the cost. But still if his speakers are an order of magnitude more expensive, it is possible that his house is an order of magnitude larger than mine. He is an Audioholic though, so maybe it is just his gear that is significantly more expensive than even the average enthusiast.

His mains are about to be even more expensive in about 30 days since RBH is increasing the prices for the SV831R and SV1212R components of the SVTRS system.
Danzilla31 posts on August 14, 2021 11:47

gene, post: 1499088, member: 4348
That passage you mention is NOT my home. I gave a demo to a client that is building a 32,000 Ft^2 home in Tampa and they were so impressed that they ordered a full in-wall version. Another upscale client recently came to my new home to hear this speaker system and they are building an 85,000 ft^2 home. If they go with a version of this system, I'm going to try to record the install on our Youtube channel with their permission. Very cool that RBH is getting this well deserved attention.

That's awesome Gene I love my RBH system hands down no contest the best setup I've ever owned period.

But I also enjoyed the customer support and getting to know Shane Duane and everyone else at RBH even more. Like you I am very happy that RBH is getting the recognition they deserve.

Anytime I entertain the theater room always comes up and getting to advertise RBH to my friends and company is a cool part of the conversation. I already have some friends interested and I'm very happy to be able to spread the love for RBH on that level
gene posts on August 14, 2021 02:13

That passage you mention is NOT my home. I gave a demo to a client that is building a 32,000 Ft^2 home in Tampa and they were so impressed that they ordered a full in-wall version. Another upscale client recently came to my new home to hear this speaker system and they are building an 85,000 ft^2 home. If they go with a version of this system, I'm going to try to record the install on our Youtube channel with their permission. Very cool that RBH is getting this well deserved attention.
gene posts on August 14, 2021 02:07

Pogre, post: 1498462, member: 79914
They'd fit beautifully in my room. Also, I did contact a dealer and it's possible to get some big discounts on these speakers. Well, the passive versions that is. I'm 1/6 of the way there right now…

@gene where does this system stand compared to your Status Acoustics setup?

The Status 8T are a very special speaker. There are things I liked about that system that the SVTRS just doesn't quite recreate. The damped bass was just incredible for vinyl. The ease of setup couldn't be beat. They required virtually NO EQ and just sounded good all the time. SVTRS is a different animal. It plays louder, digs deeper, has more dynamics, and can be custom tuned to exactly how you like it. I miss my old 8Ts. I think RBH still has them at their place. But, I absolutely love the new SVTRS system. It's the current speaker to beat from everything I've ever heard.
Movie2099 posts on August 13, 2021 15:12

I wonder if professional Audio writers can write-off Audio gear as an R&D expense?


I know I can for Cookbooks, knives, pot & pans, and other expensive kitchen gadgets.

Hahaha right! I mean, Gene is bro hams with RBH so I'm guessing got a great deal on those speakers.
Post Reply