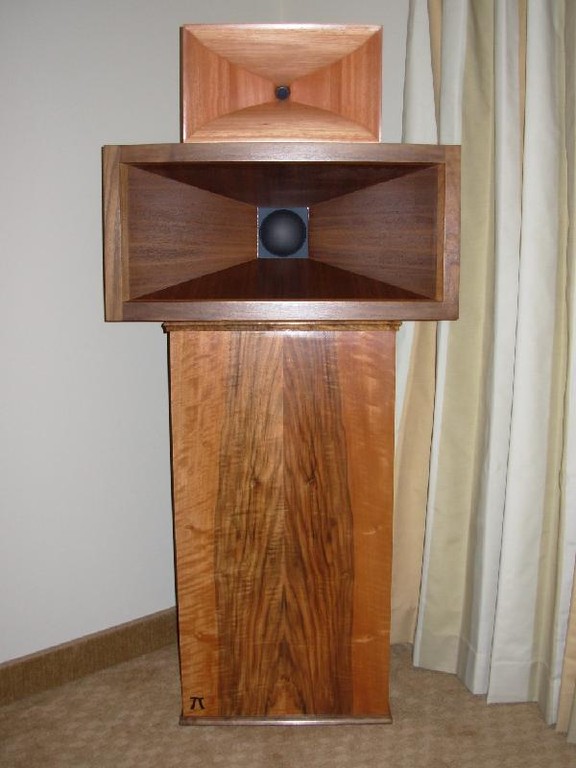 Pi Speakers has been around for a long time, but has only gained popularity in niche audiophile communities. Wayne Parham, the founder of Pi, built their first speaker in 1978, a corner horn influenced by the Klipschorn but designed to provide constant directivity, i.e. uniform dispersion over the entire frequency range. Their first directivity index-matched two-way speaker (where the dispersion of the woofer and tweeter are matched in order to deliver a smooth off axis frequency response) was introduced in 1983. The design of this speaker was heavily influenced by the JBL 4430 monitor loudspeaker, which Parham considered a useful compromise to their constant directivity corner horn for use in settings where appropriate corners weren’t available.

They currently boast a catalog consisting of various high sensitivity designs ranging from the one Pi, a modest sized bookshelf (relatively speaking) sporting a conventional soft dome tweeter and an Eminence Alpha 8 woofer, to the massive seven Pi, which features a 15” woofer, 10” horn loaded midrange, and a waveguide tweeter. Intermediate models include the two Pi (available as a large stand-mount or tower), three and four Pi (large stand-mounts), six Pi (corner horn), and eight Pi (a bass-reflex/horn hybrid). Rounding out the lineup are the three Pi, a single driver ported subwoofer, and the twelve Pi, a horn loaded subwoofer with dual 12” woofers in a push-pull configuration. A keen observer may also note the relatively high sensitivity boasted by every speaker in the Pi lineup, made all the more impressive since they are rated ground plane (except for the corner horns, which are measured in a trihedral corner), and are not in room estimates like some manufacturers use. This sensitivity also appears to be achieved without any obscene dips in impedance. For example, the three Pi speaker boasts a sensitivity of 95dB at 2.83V at 1 meter, while holding impedance at or above 8 ohms. One might reasonably expect the three Pi to be driven to high volumes with even an entry level receiver.

It’s nice that Pi offers a compelling product, but what about dollars and cents? Prices range from $400 a speaker for the one Pi to $2,900 for the seven Pi, shipping not included. If you want to try out your handy work, speaker kits are available for a fraction of the cost of a fully built speaker, from $90 for the one Pi to $450 for the seven Pi. Company policy on returns is thirty days from shipping, with a 10% restocking fee plus return shipping, which isn’t entirely out of line for a smaller outfit. Also of note, the drivers are covered by the manufacturer’s warranty for seven years, offering further peace of mind.

All in all, Pi Speakers appears to have a reasonably compelling lineup. There’s a lot to like about high sensitivity, high output speakers when those properties are coupled with reasonably flat frequency response and uniform directivity. Those attributes tend to add up to a highly dynamic yet tonally neutral loudspeaker that can be mated successfully with entry level amplification. When compared to their natural competition such as the Klipsch Heritage line, Pi speakers appear to offer an interesting value proposition. In short, Pi Speakers is one of those little guys with a lot of potential, and worth a serious look (and a seriously retro look at that).

shadyJ, post: 948965
I guess its because high sensitivity speakers have to be so big.

As you're probably aware, a lot depends on how deep you want to dig. The JTR Single 8 for example is a fairly sensitive speaker: 95dB w/ 2.83V @ 1m coupled with an 8 ohm nominal load is nothing to sneeze at, presuming the claims are realistic. Of course, the trade off is pretty clear, with a -3dB point of 80Hz.
shadyJ posts on February 04, 2013 12:35
I had heard of Pi speakers but didn't give them much attention until I read this article. Very nice looking stuff, I would love to hear some of these. There just isn't a lot of high sensitivity speakers for home audio, I guess its because high sensitivity speakers have to be so big. Some of the documents on the Pi website are interesting, I am going through the Pi speaker whitepaper and the JBL Sound System Design Reference Manual, and learning a lot of stuff from both, very interesting.
Post Reply