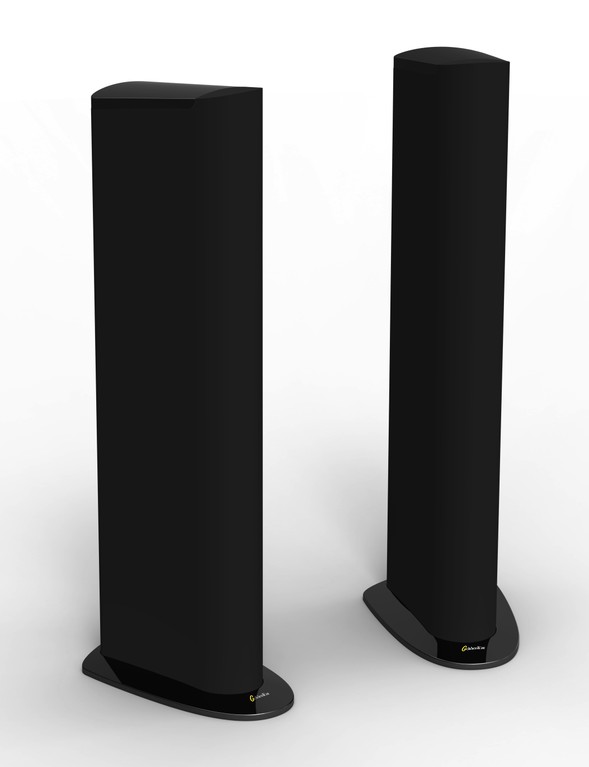 Two 4.5-inch upper bass/midrange drivers with multi-vaned phase plug, with one driver above the HVFR tweeter and the other below

Black cloth that wraps around the whole curved-back cabinet

While not always the case, you can often identify esoteric audio companies by their name. Often they are named after a person but often they more often, it seems, they are named after the sort of audio they think they are providing. In the case of GoldenEar Technology, they seem to be targeting products at clients who fancy themselves able to hear things the masses cannot. The the parlance of high end audio, a GoldenEar is someone that has devoted much time and energy to training their ear to hear the subtlest of differences between speakers, components, and even cables. While no one here at Audioholics would dare call themselves a Golden Ear since we don't really believe in such things, the marketing idea behind the name is obvious and apropos.

If you're going to have a name like GoldenEar Technology, you'd better have something other than silver wiring and pretty aesthetics to back it up. GoldenEar has all that an more starting with the founding members of the company. Sandy Gross, co-founder of Polk Audio and Definitive Technology, and Don Givogue, another Definitive co-founder have the sort of pedigree that lends instant respect to a new audio company. As you might imagine with a name like GoldenEar Technology, don't expect to find their speakers at Best Buy or Wal-mart. Instead, they are targeting specialty shops and have so far signed up 40 U.S. dealers and several foreign distributors.

They are starting up their new line of speaker with the Triton Two floorstanding speaker. Retailing at just under $1300 each, these speakers aren't exactly entry level but they surely aren't anywhere near what an esoteric consumer would consider "pricey." If you are familiar with the Definitive Technology speaker look, the Triton Two's design shouldn't surprise you. Wrapped completely in black speaker cloth, the Triton Two is trapezoidal shaped and 48” tall by 5.25” wide at the front while 7.5” wide at the back. The cabinet is 15” deep. This is not a huge speaker my any means though it does command a bit of floorspace. The black cloth shroud is also something that may take some getting used to. For a bachelor it may not be a problem, but spouses may need to be won over to the look.

The top of the line Triton Two has dual 4.5-inch upper bass/midrange drivers with multi-vaned phase plugs in a D’Appolito configuration around a High-Velocity Folded Ribbon (HVFR) tweeter. The HVFR tweeter is the real story here as it is composed of a high temperature film which is folded like an accordion. This is paired with a neodymium magnet. According to GoldenEar Technology, this combination takes up no more room on the baffle than a 1" dome tweeter but has a wider dispersion than ribbon tweeters.

The Triton Two speakers have an integrated subwoofer in each box. Each sub consists of two 5" by 9" planar drivers mounted on the front with two side-mounted 7" by 10" planar passive radiators. This should increase the Triton Two's bass response considerably, though it makes placement near other objects less desirable. We've seen side-mounted drivers and passive radiators in other speakers, but usually they are placed on one side so that you can still locate the speaker near a cabinet (which is a common situation in multi-purpose rooms). Having a floorstanding speaker out in the middle (or at least far enough away from anything to interfere with the passive radiators) may pose a problem for those that are using the speakers in a home theater setup. Still, this might be a small price to pay for the performance promised. GoldenEar Technology has rated the Triton Twos from 35kHz (15kHz above human hearing) down to a subterranean 16Hz. That's an incredible amount of performance for ~$2,500 a pair. We've seen speakers that cost that much offer far less bass.

While GoldenEar Technology have created the Triton Two with fidelity and frequency response in mind, they haven't forgotten that home theater is a big part of people's lives. In addition, they've announced the $499/each SuperSat 50 (which can be used as a left, right, satellite, or center channel), the $249/each SuperSat3 (designed as a small center or a surround), and two subs - the $499 ForceField 3 and $699 ForceField 4. The two SuperSats can be used with their included stands or wall mounted (their ~2.5" thickness makes the latter very attractive). The ForceField 3 and 4 offer 8" and 10" drivers respectively with similar planar radiators as featured in the Triton Twos. They have 1000 and 1200 watt amps respectively and feature trapezoid-shaped high-density MDF cabinets with rounded edges in matte-black finish. Whole 5.1 systems start at $1,750 (SuperCinema3 consists of four SuperSat3 speakers, a SuperSat 3C center channel, and a ForceField 3 subwoofer) and top out at $3500 (SuperCinema 50 system consists of two SuperSat 50 speakers, a SuperSat 50C center channel, two SuperSat 3 speakers, and a ForceField 4 sub). At CEDIA, we had a chance to demo these speakers first hand.  Sandy Gross was personally giving demos playing music upon request.  Upon first listen it was hard to gauge anything because of the ridiculously loud demos (akin to a Car Audio Expo show) in an adjacent booth from Pro Audio Technology.  The demo room was stacked with high end amplification and electronics with a few rows of seating which always seemed occupied by press and consumers dying to take a listen to these new inconspicuous looking towers.  The draped black clothe and low lightening of the room made them difficult to capture with my camera but it does show how well they blend or disappear into a theater room.

Sandy was playing acoustical piano to showcase the tonal accuracy of the speakers but it was simply lost in the high noisefloor.  I suggested more upbeat dynamic music and he asked me what my poison was.  My reply was Progressive Jazz and his answer was Pat Metheny.  It was as if he had a direct feed to my brain to hear my thoughts.  This was right at about the same time the Car Audio show demo next door took a momentary break and I really got a chance to hear what was going on.   Upon first listen, I immediately locked onto the Pat's electric guitar which I am intimately familiar with.  The Triton Two's got the tonality correct which was a tribute to the well executed D'Appolito MTM driver arrangement.  Bass was tight and well extended.  The soundstage was expansive making it a real pleasure to hear full length songs which I really didn't have the time for but decided to sacrifice some extra show coverage for a great listening experience.

There is no denying the legacy of experience behind the creators of GoldenEar Technology. When you start off with that sort of pedigree, you have to expect that their products at the very least have real technology behind them. The pricing of the Triton Two speakers (and the others in the line) are very competitive with even internet-direct speakers. If you live near one of their dealers, you have the advantage of popping in for a quick listen. For Internet Direct speakers, you have to go to their forum, contact a member, and probably bring them beer to get a demo. Once you get into a specialty shop and you see the prices of the other speakers probably contained within, you'll probably feel like there is something wrong with the Triton Two's. Don't be fooled. Just because they are one of the cheapest in the shop doesn't mean they aren't worth a listen. Just remember, if that 16Hz spec is true, the shaking of your chair, pant leg, and ribs are from the speaker, not an earthquake.

Read the Complete Thread
dem beats posts on February 23, 2011 00:43
here is a quick compare and contrast. I didn't want to hijack the thread so I'll link it.

dem beats, post: 794613
I actually auditioned these, and they were the alternitive to the martin logan purity's that I ended up purchasing. I A/Bed them for 45 min or so back and forth after giving the paradigm signatures that were in the running the ax.

If they were both listed as MSRP I may have gone with the Golden Ears. I think they are horidly ugly however. They would blend into an HT in a wonderfull way though, in that dim lit room.

They do have the low hz handled. I listened to quite a bit of piano, rock and some more contemporary music and they definately had a larger pair than the logans in the bass department.

What did you think of the Paradigm Signature? Were they S6 or S8?

How would you compare the Paradigm to the GoldenEar or Martin Logan Purity?
dem beats posts on February 22, 2011 10:39
I actually auditioned these, and they were the alternitive to the martin logan purity's that I ended up purchasing. I A/Bed them for 45 min or so back and forth after giving the paradigm signatures that were in the running the ax.

If they were both listed as MSRP I may have gone with the Golden Ears. I think they are horidly ugly however. They would blend into an HT in a wonderfull way though, in that dim lit room.

They do have the low hz handled. I listened to quite a bit of piano, rock and some more contemporary music and they definately had a larger pair than the logans in the bass department.
AcuDefTechGuy posts on February 21, 2011 21:39
Personally I think Sandy Gross' speakers will sound great.

With that being said, I have “called” him “out” on AVS and asked him why he insists on “lying” about the frequency response. He addressed most questions, but I think he ignored my question.

I think he was surprised I came “at” him because my screen-name is AcuDefTechGuy.

I figured since he is starting a new company, why not start fresh and honest?

People know I like his speakers, but that kind of marketing has go to stop IMO.

And sure, don't judge a book by its cover. Sure. But everything is important.

I think people want their speaker designers to be “honest”. If Sandy Gross says that his speakers have a 20Hz - 20kHz +/-3dB in an anechoic chamber, who is going to believe that?

Again, personally, I think Sandy Gross' speakers will sound great based on my experience.
Post Reply