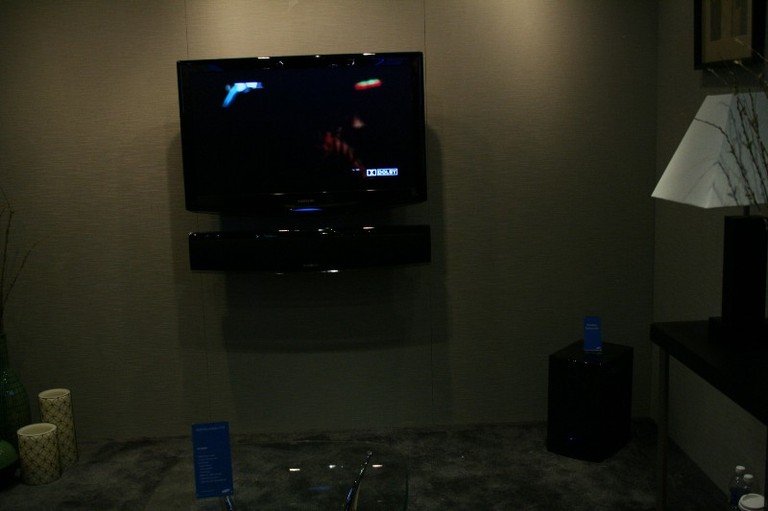 Samsung Electronics is making high-definition video more accessible than ever to consumers with its HT-X810 Home Theater Sound Bar. Now usually we look down our noses at surround bars but with an integrated upconverting DVD player, Bluetooth connectivity AND a wireless sub, we couldn't help but be intrigued.

The HT-X810 Home Theater Sound Bar, with its piano black finish, is a self-contained, wall-mountable home theater speaker system is designed specifically to fit with all Samsung TV models 40-inches and above. It features a slot-loading DVD player with Full HD 1080p playback on standard DVDs and a HDMI-CEC output allows the user to control both the TV and home theater with one remote. It also accommodates a multitude of playback options, including DVD-Audio, CDs, DivX, JPEG, MP3 and WMA files.

With 300 watts of total output power, consumers can be assured that they’ll enjoy a fullbodied audio experience, especially when paired with the wireless subwoofer for rich bass reproduction. Using the latest 5.8GHz wireless technology, the HT-X810’s subwoofer can be positioned and hidden most anywhere in the room.

From MP3 players to cell phones to PCs, the HT-X810 is all about seamless connections. Not only does it easily connect with any Bluetooth-enabled device to expand wireless audio listening capabilities even further, it also integrates easily with a variety of different devices and file types. The USB Host Play makes for a quick, direct connection to other mobile devices, including flash drives and digital camcorders, bringing full multimedia compatibility into the living room. The HT-X810 will be available in May 2008. For more information, please visit www.samsung.com.