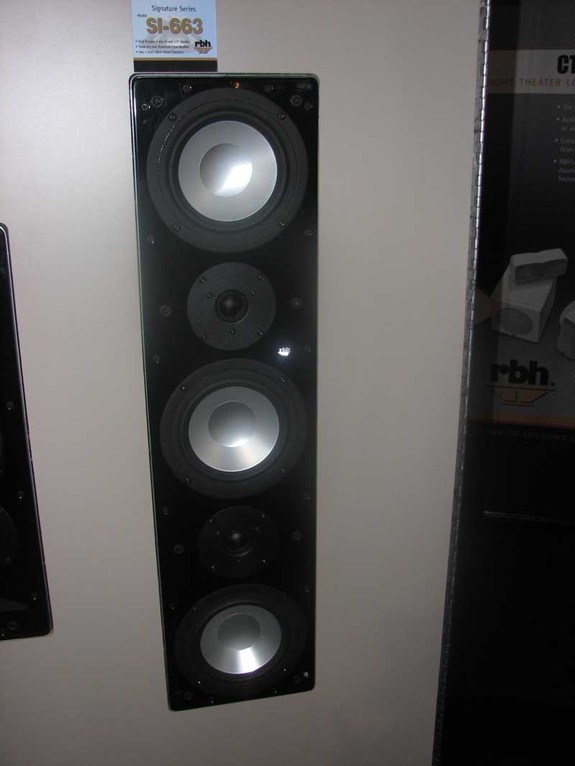 RBH Sound displayed their newest In-wall products at CEDIA this year.  The SI-663 (pictured above right) and the SI-744.  Both of them use the same high quality driver compliments found on their other Signature in-wall products but the configurations are slightly different creating installer options never before offered in their product lines.

Using three proprietary 6.5-inch metal cone woofers and two 1-inch silk dome tweeters, the SI-663 in-wall speaker is primarily designed to be used as the front left or right speakers in a home theater system. The new model will replace the series’ SI-6000 in-wall speaker which utilized an additional 6.5-inch driver, but had one less tweeter and less features. For example, the most noteworthy trait of the new SI-663’s is that a pair of them can eliminate the need for a dedicated center channel when wired for dual channel operation. Elaborating on the new model, Shane Rich, RBH Sound’s Technical Director explained, “The SI-663 is the ultimate hi-fidelity solution for situations where a dedicated center channel is intentionally removed from a surround system to allow for design requirements or otherwise cannot be used. Because of the SI-663’s design, a pair can provide discreet center channel audio from both the left and right front speaker without the use of a separate center channel speaker.” Rich also clarified that for situations where a third SI-663 can be used as a dedicated center channel, the trio can be wired in standard configuration, allowing each to discretely provide left, center or right channels for a seamless front sound stage.

The SI‑663 in-wall speaker features its own tuned enclosure to provide an optimized environment for the speaker while preventing unwanted cabinet resonance. The enclosure is designed to be installed into a standard stud-framed wall prior to drywall during new construction or renovation and includes an integrated metal drywall cut-out ring. The SI‑663’s baffle fits snugly into the area left over after the drywall is finished and is completely flush to the wall when complete. A .5-inch thick black or off-white fabric grille finishes off the look of the SI-663 and can be dyed to match the room’s décor or custom finished by RBH Sound’s professional custom integrator dealers.

Since the SI-663 incorporates RBH Sound’s proprietary metal cone drivers, it is timbre-matched to other RBH Sound Signature Series in-wall and freestanding models, allowing it to be combined with many other types of speakers for a voice-matched, customized home theater system. To eliminate light reflections off of the metal cone drivers from certain projector/screen combinations, RBH Sound also offers the SI-663 with black-anodized 6.5-inch metal cone woofers.

RBH Sound has many proven monopole in-wall models within their Signature Series which can be used for surround channels, but the SI‑744 is the company’s first dedicated multi-pole in-wall surround channel for the series. The SI‑744 employs four proprietary 4-inch high performance metal cone woofers and two 1-inch silk dome tweeters for excellent performance and crystal clear sonic accuracy. True to RBH Sound tradition, the SI‑744 is timbre-matched to the rest of the Signature Series In-wall and freestanding speakers.

The SI‑744’s design places two of the woofers and one tweeter on a 45-degree angle towards the screen, while the other two woofers and tweeter point on a 45-degree angle towards the rear of the theater. This 90-degree angle opposing design, combined with the SI‑744’s dual- or single-channel wiring capability, presents a unique surround sound solution. When integrated into the rear sides of a home theater system and wired in dual channel mode, the SI‑744’s front-firing drivers can play side surround channel audio and the rear-firing drivers can play rear surround channel audio. This configuration provides all four surround channels in a 7.1-channel surround sound system from one pair of SI‑744s. In other words, RBH Sound dealers now have the unique ability to offer their clients four channels of surround sound when their room’s design prevents another set of rear speakers from being integrated into the surround system. When wired in single-channel mode, the SI‑744 presents its listeners with a bi-polar dispersed sound field for increased surround coverage.

As with other RBH Sound Signature Series In-wall models, the SI‑744 features its own tuned enclosure to provide an optimized environment for the speaker and prevent unwanted cabinet resonance. The enclosure also boasts an integrated metal drywall cut-out ring and is designed to be installed into a standard stud-framed wall prior to drywall during new construction or renovation. The SI‑744’s baffle fits snugly into the area left over after the drywall is finished and is flush to the wall when complete which, RBH Sound says, will be a welcomed change from the typical in-wall Di-/Bi-polar protrusion from the wall the competition offers. The SI‑744 is finished with a .5-inch thick black or off-white fabric grille which can be dyed to match the room’s décor or custom finished by RBH Sound’s professional custom integrator dealers.

These new in-wall products offered up by RBH Sound are prime examples of thinking outside the box (no pun intended).  We appreciate the flexibility these products offer for both the custom installer and the end user alike.  It’s nice to see products that allow for a full multi channel experience while eliminating some of the speaker locations traditionally required in achieving it.  We welcome feedback from installers on how these systems sound when integrated into a full theater application since it’s often impractical for review publications like Audioholic.com to review in-wall products.

They offer a similar ‘dual purpose’ system with their MC-553 L/R speakers. Each can be used as a single left or right channel by connectng both sets of binding posts or you can connect a center channel to both left and right, but just the lower binding posts, to create a spacious centre channel and connect the other inding posts to have the upper two woofers and tweeter as left and right channels, when you have a fireplace or large screen that limits from for a dedicated centre channel.