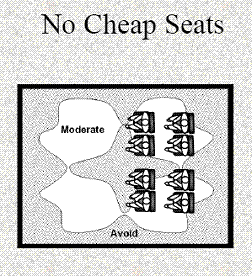 This article is about HAA certification training and it also contains some great information on home acoustics from the course which I have included in this article. You may find that even a few tidbits of information can make drastic sonic improvements to your system.

I finally attended the HAA Level I certification training which was held in Orlando after EHX. A few years ago I read most of the "The Master Handbook of Acoustics." Many topics of the HAA training were based from this book. I wasn't sure what I was going to get out of the training since I already knew many of the acoustical principles from the book. I couldn't have been more wrong. The HAA training was a lot more than just principles out of the "Master Handbook of Acoustics" and Gerry LeMay, the instructor and HAA director, offered a wealth of knowledge.

Just knowing acoustical methods isn't good enough for a great sounding system. Gerry takes all the important qualities of small room acoustics and put them together in a practical and very usable form. He has taken acoustical concepts and applied them with Real Time Analyzer measurements using Sencore equipment which allows the calibration of the audio system. Audio calibration is not just changing speaker settings in a receiver or processor. It's about calibrating the entire room.

I have been in many theaters which are so over treated with absorbing material you would think you were in an anechoic chamber. These designers overemphasize the importance of dialog intelligibility for movies and over treat the room with absorption resulting in a lack of snap and liveliness for music. Next time you're in a room like that ask the designer when the last time he or she has seen a movie that didn't have music. Gerry LeMay had such a refreshing approach to theater design that I was all ears and ready to soak in all the knowledge I could.

The course started off with an explanation of Sound Quality Management (SQM). SQM is basically starting a theater project from the construction phase and taking it all the way to final room treatments and measurements. SQM also includes an explanation and education for home theater owners so that they can understand the benefit of a properly calibrated room. One of the key factors we learned was eliminating listener fatigue and my favorite quote from the course was "take away the pain so they can turn up the gain." After a discussion about distortion and listener fatigue the definition of sound quality was explained. Sound Quality includes clarity, focus, envelopment, response and dynamics. One sonic quality that many designers overlook is seating arrangement. Gerry's approach is to for all the seats to have good sound, not just the "money seat." His view is that everyone in the theater should have a good movie/music experience and we agree. That doesn't mean that every seat is perfect, but you should strive to have a smooth system response for all the seats so everyone can enjoy the experience. Next he touched on the importance of dynamics and its association with a quit room. It was fun to see how Gerry showed that Home Theater Nirvana would be achieved with a 500 Watt per channel system. The following two slides are a little out of context here but it was used to get a point across about dynamic range.

In contrast to 105db being the maximum Sound Pressure Level (SPL) the softest levels that can be heard are about 22 dB in a THX certified room. So if there is a lot of ambient noise in the room we will turn up the volume to hear above those noise levels and since most of us don't have 500W per channel systems we can now see how we have vastly limited the dynamic range of the room. With a 125 WPC system and a projector with 30 dB of fan noise, not counting the other ambient noise infiltrating the room, the usable dynamic range of the room is only about 70 db. In actuality SPL drops 3 dB for every doubling of the distance from the speaker in small rooms. So if you had a more efficient speaker say 92 db and you are 10 feet from it then the SPL would be 84dB at the listening position. Now you only need a 128 WPC system to reach Home Theater Nirvana. These types of methodologies are what made this training so interesting and enlightening.

After understanding sound quality the seminar moved into some technical aspects of sound and then progressed toward understanding the sonic goals. It started off with an explanation of the sine wave, its frequency, wave length and the phase between two waves. Then it progressed to how we hear which included equal loudness, human acuity, noise, and human adaptability. The importance of how we hear is obvious but why it is important may not be. The bullet items for human hearing are:

The last bullet item lead the discussion into "Weighting Filters" , then into "Pink Noise" and why they are used as the standard for testing sound. It was also interesting to learn how adaptive humans are in general and how it applies to audio; meaning that we will adapt to distortions and bad sounding systems. It is very typical for the man of the house to boast about the great sound of his new system even though it may not. He may unwillingly accept mediocre performance because his ego has to justify the purchase and thus he adapts to the system as is. While his wife does not have that same ego and may not even understand what she is hearing but she will speak up and say "it's too loud" or just leave the room seeming uninterested in the movie. She too will eventually adapt. Don't think for a minute that women are not a good judge of sound. They may not get as involved but they have as keen an ear as any man. Of course with an HAA calibrated system we don't need to adapt to poor acoustics.

At this point we started using the Sencore SP295 Real Time Analyzer. Although Sencore is promoted in this seminar because they sponsor it, they really have some great equipment for audio analysis. For those of you who don't know what a Real Time Analyzer (RTA) is, it is basically test equipment that takes a feed from one or more microphones and measures a full spectrum of frequencies at one time. Thus it gives a frequency response in a few seconds without having to do a frequency sweep.

Next Gerry focused on frequency response and its major role in the calibration of the room. I was surprised to learn that a perfectly flat response is not the ideal response. A better response, referred to as the Target Frequency Response (TFR), is slightly boosted in the low frequencies and then slightly tapered off in the higher frequencies which are due to the way the music and movies are mixed.

Next, we learned about low frequency acoustics. Not just subwoofer frequencies but frequencies below 500Hz. We applied what we learned about phase to speaker placement; in particular, boundary gain and boundary interference. Gerry showed the effects of having speakers too close to any boundary, walls, floor and ceiling. We saw how reflections from the speakers at the boundaries caused path differences or phase differences which in turn created gain.

All these reflections and phase differences are what ended up producing comb filtering in case you were ever wondering. Gerry refers to the whole problem as Speaker Boundary Interference Response (SBIR). After getting a clear understanding of SBIR he showed us some techniques to correct it. One of the simple ones was to avoid having your speakers at any equal distance from opposite boundaries. In other words, don't place your speakers at 4 feet high in an 8 feet high room because then they are equal distance (4 feet) from each opposing boundary. Speaker placement was very heavily stressed throughout the training which is one of the major disadvantages of in wall speakers. While they may have excellent sound qualities you are very unlikely to be moving them around by cutting new holes in the wall. The same thought applies to floor standing speakers. They can be moved but it is much harder than a small 2-way speaker. Just think, something as simple as moving your speakers with the guidelines given you can make some big improvements in your system. I tried moving my speakers around with some of these guidelines in mind and I could hear big differences. While I improved the bass response I could also hear more edginess but this was due to the fact that my early reflections were no longer hitting my absorption panels. This edginess may indicate that the off axis response of my speakers is not ideal but I haven't measured it yet to confirm. Although there is a trade off the best thing is that I understand what is going on due to the HAA training.