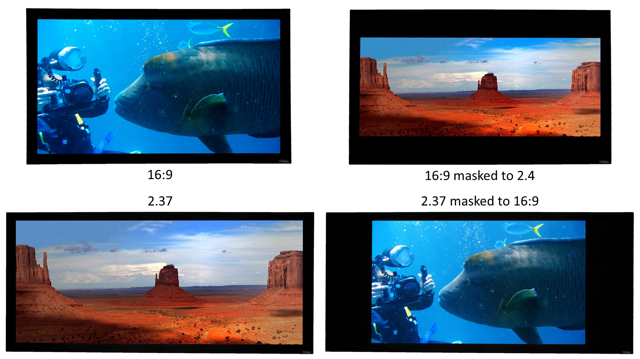 Going from a CRT that you have to squint at to a large flat panel is an upgrade. Bumping up to a projector that allows you to sit back in your seat and really feel like you're in a theater is the next, best step. But, invariably, you'll end up with masking issues. Masking, for those unfamiliar, is are those black bars that appear when the image has a different aspect ratio than your screen. On a screen, masking is often represented and aided by the part of the screen that frames the reflective material. It is designed to absorb overshoot to create a perfectly rectangular image. It is the sort of thing you don't notice until you don't have it.

One thing that really helps take your theater to the next level is adjustable masking. As you are probably aware, movies come in various aspect ratios. As we mentioned, this leaves you with black bars on the sides or top and bottom of your image. In the theater they use curtains to cover up the unused sides of the screen when aspect ratios change in presented films. At home they are just plain annoying with a regular display. With a projector, those bars are being projected onto a typically white surface designed to be very reflective. This means that, at best, you are probably looking at dark grey, rather than "black", bars. Remember, you can;t "project" black. That means your screen will only ever get as dark as you can make the room.

And when you're projecting light into the room from a front projector, you can never achieve total black on those bars.

This will reduce the contrast you perceive in the image. For a true videophile, or anyone looking for the best picture quality available, it is something that is annoying to the point of distraction.

Variable masking systems for front projection systems are available. They are also, typically, incredibly expensive. Even the most affordable solutions will run you over $2000. So when Seymour-Screen Excellence announced a masking panel system for their Reference Fixed Frame Screens, our first question was, "How much?" We hit the floor when we heard the price. But first, let's check out how it works.

Seymour-Screen Excellence specializes in acoustically transparent screen materials, but they do regular screens as well. Their fixed frame offerings feature high-quality extruded aluminum frames. Their new masking panels are essentially fabric covered panels with neodymium magnets that attach physically to the frame. This makes them easily added, removed, and adjusted. The lack of moving parts means you won't be able to press a button to make them work but, on the other hand, they start at just $450 for a set.

Seymour-Screen Excellence claims that you can save up to 80% off the motorized options out there and we, frankly, think that sort of savings is worth a bit of manual labor. The Seymour-Screen Excellence panels are covered in "Infinite Black" black velvet. They also do not require remounting the screen further back within its frame (which often results in unsightly shadow lines).

Seymour says the constant height masking configuration will alter a native 2.37 screen aspect ratio to 1.78, with one removable panel per side; and a constant width configuration will alter a native 1.78 screen to 2.40 using a set of four masks, two each for the top and bottom, so that they are easily handled and stored away when displaying 1.78 content.  Additionally, new constant area SSE RF screens in a native 2.07 ratio configured with a pair of side masks and a set of top and bottom masks, allows all common aspect ratios to have the same overall image size.

But Seymour-Screen Excellence claim to fame is, as we mentioned, acoustically transparent screens. This allows you to place your speakers behind the screen for a really professional look - and that theater sound where your audio is truly coming directly from behind the action. They've got a solution for this as well. SSE’s acoustically transparent panel option attenuates sound by only 0.3dB, and features a 1.5-inch to 3.5-inch wide leading edge of Infinite Black velvet to absorb the overscan pixels by over 99.7% (see image below).  Seymour says the difference in their shades of black is invisible during viewing (presumably in a darkened room), completely blocking out the pillar-box gray areas from the sides.  The Infinite Black velvet configuration provides total blacking out of the masking area. Like This? Check out our other Projector Screen Reviews!