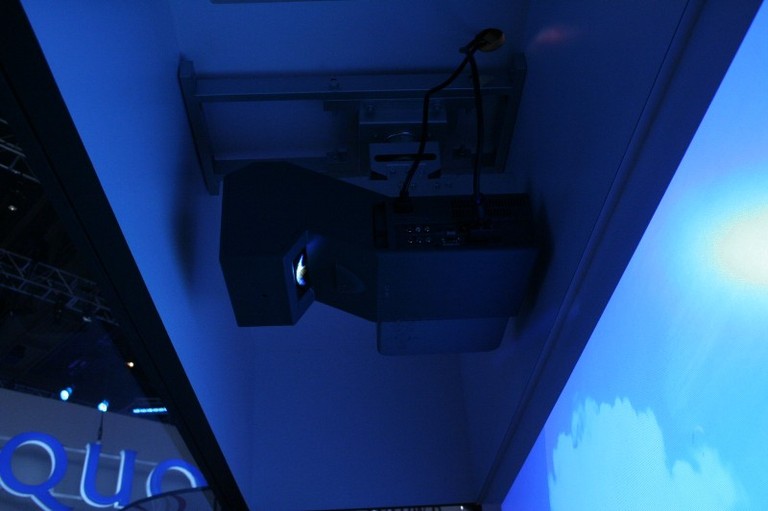 Sanyo showed off their PLC-XL50 LCD Short-Throw Projector at CES this year. The unique short throw distance of the PLC-XL50 allows projection in virtually any environment, particularly areas that traditional projectors can not be used, such as walls, floors and desktops. In order for Sanyo to shorten the projection distance of the PLC-XL50, new large diameter aspheric lens and high-precision aspheric mirror technology was developed. A new optical engine was also developed, which enables an 80-inch projection from the short distance of only 3-inches (8 cm)! This creates an opportunity to project extremely large images in any room or space that is available.

The proprietary optical and cooling mechanism technology used in the PLC-XL50 allows both vertical and horizontal projection. The new optical engine was created with a high-precision aspheric mirror combined with a distortion correction mechanism lens, enabling large magnification without distortion, even from an ultra-short distance. To allow projection either vertically or horizontally, a special cooling mechanism was essential. The resulting solution is a one-way flow system consisting of an air intake and exhaust mechanism on the main body of the projector, which allows the optimal positioning of the main components.

By shortening the distance for projection, the options for installation are greatly improved, which includes floor, tabletop and wall mount projection. The variety of applications is almost limitless, providing effective, quick and easy presentations or announcements. For instance:

Additional features include Top and Bottom Keystone Correction for proper alignment of the projector, a Color Board Mode, which allows adjustment of the hue when projecting an image on a colored (non-white) surface so that it appears to be projected on a white surface. The additional Black Board Mode enables educational institutions to use the projector with all standardized educational boards.

The PLC-XL50 has been outfitted with a built-in vibration sensor alert. An alarm sounds when the unit is picked up, proving to be an effective theft-deterrent. The unit turns on automatically when the power cord is plugged into an electrical outlet and with the Easy-Off function it's possible to remove the power cord without waiting for the machine to cool down, which is convenient for quickly clearing away the area after a presentation. The PLC-XL50 is now shipping with a MSRP of $3295. For more information please visit http://www.sanyoprojectors.com.