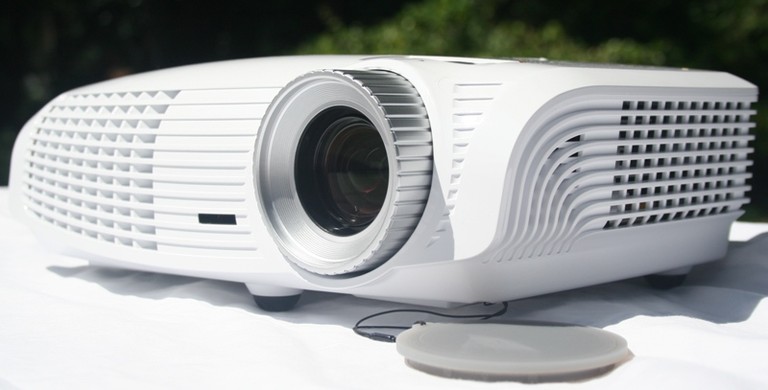 Optoma has upped the bar with their release of the HD20. This sub $1k projector is full 1080p, has more than enough inputs for most applications, and gets you into a front projection system for an unbeatable price. Value shop for a power retractable screen and a mount and you're only out around $1700. I know lots of people that have paid that (and more) for a 50" flat panel. At this price, if it turns on it's pretty much a success. Well, I'll spare you the suspense - it turns on.
Next Page ⇨

the normal offset is 7.8 hell 8“inches) tilt the projector slightly upward if you need to..usually have to with low ceiling and a ceiling mount.. the picture will start a foot or more below the ceiling. and get about a 3-5”“ top and the keystone feature will fix the vertical.. only a little keystone correction goes a long way.I wouldn't suggest tilting it upward more than 6-8” .. I have not noticed any difference in the picture or any additional artifacts tilting it upward (6“ on 100” diag. screen) … You only get a very dark gray at best…. so that's the trade-off with a darkchip 2 vs darkchip 3 projector.. compare the price difference and live with this shortcoming..
finishers posts on June 22, 2010 10:22
Black level on the HD20 is only middling, as the projector lacks an auto-iris and has a fairly bright lamp, black areas of an image can sometimes appear very dark grayish…….
tcarcio posts on March 21, 2010 12:02
Good review but I will say this, I have an Optoma and I agree on the performance aspects of the review but Optoma's customer service is one of the worst in the business, IMO. I consider that a dealbreaker but ofcourse others may not. Just my 2 cents.
KASR posts on March 21, 2010 00:32
Great review! I recently upgrade my home setup with a projector and screen - had the new setup for a little over a week now and I did discover one MAJOR flaw…could possible be considered a large drawback:

There really is no going back. I LOVE this screen size and the 1080p on this projector is nothing short of stunning. I'm sure that a trained video critic have and will touch points of where this projector falls short, but for me - I can't see em!

Movie are crisp and clear and I don't know why people say the HD20 is a noisy projector - I can barely hear the damn thing. Of course, the cool down process is a bit loud, but that's only when I'm finished using the theater room. I can hardly count that against it.

Anyone considering a projector setup - as a newly converted: I strongly recommend it. But make sure you get all the details lined out before you do it (room size, wall, screen, etc.) and you'll be well on your way to next level!
BMXTRIX posts on March 17, 2010 21:47
The HD20 does not have lens shift. It has minimal offset though which you can see with the projection calculator at projector central.