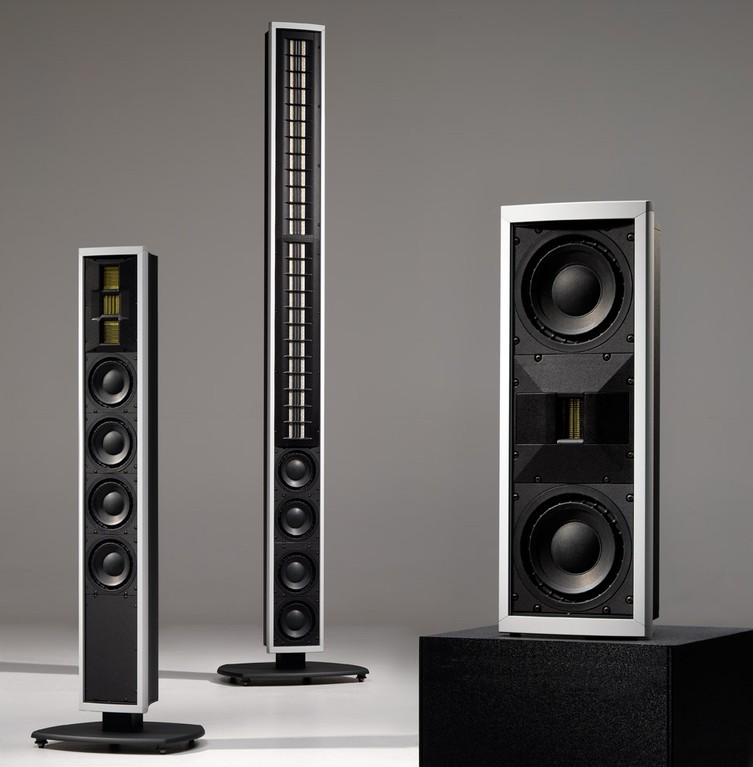 We don't review a whole lot of electrostatic speakers around here. It isn't because we're not interested in them (we are) or because we don't review speakers in their price range (we do), it just hasn't come to pass. For whatever reason, we haven't had the chance to get our hands on very many. But that doesn't mean we don't like to window shop them. Their generally sleek design, thin profile, and crystal clear sound is certainly enticing. Of course, the big drawback to electrostatic speakers has always been the size of the sweetspot. We've often heard electrostatic speaker described as the world largest, most expensive headphones as the sweetspot is usually about the size of a single head. Who would say such a thing? Why us, of course.

Wisdom Audio describes themselves as "the leader in planar magnetic technologies for architectural speaker solutions." While some might question the use of "the" rather than "a," the fact is they probably don't have a ton of competition. Electrostatic speakers make up a small percentage of the total number of speakers manufactured and architectural planars have got to be an even smaller subset of that. If you glance around the Wisdom Audio website, however, you'll find that almost all of their speakers come in on or in wall configuration with some having freestanding counterparts. Generally it is the other way around with freestanding speakers dominating and in/on wall speakers relegated to the online equivalent of the kiddy table at the Thanksgiving feast.

Wisdom Audio has 11 different speaker offerings including six loudspeakers (L150, L100, L75, P45, P38, P20), three center channels (C150, C38, C20) and two subs (S90i, SCS). The "L" in the model designation indicates what they call a "Line Source" or better known as a "Line Array" while the "P" indicates Point Source. A Point Source speaker is the traditional type where a tweeter (an electrostatic one in this case) is set in a box with any number of woofers to create sound. A Line Array usually involves a larger number of tweeters/woofers in a tall, vertical line. Line Arrays are known for their fidelity and resolution but are often hard to implement correctly. Add to that the notoriously hard to drive planar tweeters and you've got a combination that is rife with negative possible outcomes.

Wisdom Audio is combating these problems in two ways. First, they require the use of their own system controller (the SC-1) for use with their speakers. The SC-1 is not a receiver but an active crossover. This allows you to bi or even tri-amp your speakers. In a welcome, but unexpected move, they've included Audyssey's professional-level MultEQ XT room correction system. Of course, they offer their own amplifiers for use with the SC-1. The SA-1 is a dual mono design (one input, two speakers for bi-amping), the SA-2 is a two channel amp, and the SA-3 is a three channel amp. All sport 500 watts per channel into 4 ohms.

The thing to remember about the Sage Series loudspeakers is that they are a hybrid design. Most of what you hear is reproduced by a thin-film planar magnetic driver, and is complemented where appropriate by high operating pressure woofers. These transducers are all proprietary and designed by Wisdom Audio. Each loudspeaker also requires bi-amplification (since they are in different enclosures), with independent amplifier power provided directly to each portion of the loudspeaker. This practically demands a custom installation for these speakers. While Audyssey will make integration into your room much easier, it doesn't guarantee that these speakers will be plug'n'play. In particular, the XT portion of the MultEQ gives the installer much more flexibility and power in tuning your system than the user. This allows them to dial in the system.

Lastly, there are two subwoofers offered by Wisdom Audio. One is a freestanding unit that is designed to be hidden away (no coffee table offering here). It more closely resembles one of those "bass modules" than it does a traditional sub but at 72lbs, it definitely has more heft. The small size of the SCS (7” by 22.5” by 37”) practically begs to be placed behind a couch or off in a corner somewhere. The S90i, on the other hand, is an in-wall/in-ceiling/in-floor sub that is designed to be tall and thin. This allows it to fit in the wall cavity while maximizing performance. The sub is fully encased in its own enclosure which will help standardize performance. Both subs are rated down to 20Hz.

One point of concern (other than what is sure to be a high price tag for the Wisdom Audio offerings) is their ratings of their speakers. While most manufacturers will state their speaker's performance with a +/-3dB metric, Wisdom Audio tacks on "relative to the target curve." Well, the ideal "target curve" is generally a straight line, not a curve at all. With this qualification, their measurements leave a bit of a question mark in our minds. It might just be a figure of speech or it might be a marketing gimmick to let them claim whatever frequency response they want.

Since Wisdom (not to be confused with Wilson) Audio's offerings are designed with the custom installer in mind, it should come as no surprise that their offerings are a bit pricey. While we didn't find the MRSP on all the speakers, the SCS sub clocks in around $4000. Don't expect their higher-end in-wall speakers to cost anything less than 5 figures. Add in the controller and amps and you're looking at the price of a luxury car or a small house. If you've got that kind of scratch to spend on a custom speaker setup... well, we envy you. Wisdom Audio has taken what is obviously an audiophile product and married it with technology (namely Audyssey) that will make it sound its best. While others are pushing special rocks and cones, Wisdom Audio is adding room correction and dedicated amps. We can see the wisdom in that.

admin, post: 748131
Wisdom Audio describes themselves as “the leader in planar magnetic technologies for architectural speaker solutions.” Wisdom Audio has 11 different speaker offerings nearly all of which incorporate planar magnetic and traditional transducer types. They specialize in in- and on-wall speakers but do have a few freestanding options. Because of their unique design, they require integration with their proprietary active crossover which has, surprisingly, Audyssey MultEQ XT room correction built in. Wisdom Audio has taken what is obviously an audiophile product and married it with technology that will make it sound its best. While others are pushing special rocks and cones, Wisdom is adding room correction and dedicated amps. We can see the wisdom in that.

They aren't electrostatic speakers either, they are a type of ribbon. An electrostatic loudspeaker uses no magnets at all. They are basically huge capacitors, and the membrane moved uniformly by modulating a huge, (several thousand) volt charge on the membrane.
AcuDefTechGuy posts on September 03, 2010 10:42
Couldn't they use a name that doesn't sound like WILSON Audio?

Isn't there a law against that?

Reminds me of the White Van speakers like Paradyme (instead of Paradigm), Acoustics (instead of Acoustic Research), etc.
Post Reply