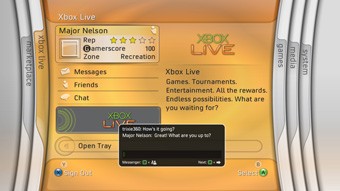 With this update to Xbox 360, friends and families can easily connect and chat directly from their television using Windows Live Messenger, a network of more than 20 billion relationships and more than 260 million active accounts.

Beginning the week of May 7, 2007, the Xbox 360 Spring Update will provide Xbox 360 owners worldwide with access to Windows Live Messenger features, broadening the communication options on the Xbox LIVE social network.

Members of the six-million-strong Xbox LIVE community currently send more than two million text and voice messages a day and can now use Windows Live Messenger to text chat with up to six people on their contact list at one time, while playing games, listening to music, or watching movies. Text chat adds to the variety of options friends and families already have to communicate with on Xbox LIVE, including voice and video chat.

"Bringing the largest IM community in the world, Windows Live Messenger, to Xbox 360 makes sense, as Xbox LIVE has really become the largest social network on television," said Jerry Johnson, product unit manager of Xbox LIVE at Microsoft. "For our growing community of six million on Xbox LIVE, using Xbox 360 is a very social, connected experience. They are using Xbox 360 to play games, music, and movies while simultaneously communicating with one another through video, voice, and text chat. With this announcement we are simultaneously expanding the access of Xbox LIVE users to existing friends and family while introducing Windows Live Messenger users to the benefits of Xbox 360."

Beginning the week of May 7, users of Windows Live Messenger on Xbox 360 can text chat using the virtual keyboard accessible on Xbox 360, or by connecting a USB keyboard to the console. This summer Microsoft will launch a QWERTY text-input device, a new accessory that will connect directly into the Xbox 360 controller to support text and instant messaging.

Beyond Windows Live Messenger, the Spring Update for Xbox 360 includes hundreds of new features and enhancements including:

The Spring Update is free beginning the week of May 7 and will be easily accessible to every Xbox 360 owner through Xbox LIVE or on Xbox.com.

You may not even notice all the new features, but they are all designed to enhance your Xbox LIVE experience. Some of the other features in this upgrade include:

Read the Complete Thread
kicknsupra posts on May 10, 2007 00:43
now how about a up date for the bad hd dvd sound when i play old dvds they seem to sound better was told by a gameing geek that there was a update for the hd dvd sound comeing i hope its soon
GlocksRock posts on May 09, 2007 13:20
I don't care about the instant messaging part, because I mainly use Yahoo Instant Messenger, but some of the other updates look very good. I'll have to go home and get the update right away. I can't wait to see what the next update will include.
Post Reply