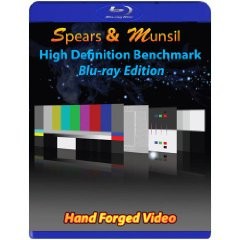 Stacey Spears and Don Munsil, acclaimed creators of the DVD Player Benchmark™ and Progressive Scan Shootout at Secrets of Home Theater and High Fidelity®, announce the release of the Spears & Munsil High Definition Benchmark, Blu-ray Edition. (http://www.spearsandmunsil.com) This disc is filled with test material and calibration patterns to help home theater enthusiasts evaluate displays and players and adjust their home theater systems to get the best possible picture.

The High Definition Benchmark uses all-new patterns created from scratch. “We developed our own pattern software so we could make patterns for ourselves for evaluation and calibration. We didn’t make our disc by encoding patterns from an off-the-shelf pattern generator,” said co-creator Stacey Spears. “Everything was created and encoded entirely by us, with no compromises on quality.”

The disc includes patterns not seen on other discs, and new twists on old favorites. A clipping pattern makes it easy to see whether the display is reproducing the highlights or shadows properly. The cropping pattern instantly shows how much of the 1080p image is being cropped by the player and/or display. A whole suite of chroma-channel evaluation patterns make it easy to evaluate chroma reproduction separately from luma.

“Our proprietary software generates the patterns in the native color space of Blu-ray, without any unnecessary color space conversions or rounding. That’s the only way to minimize artifacts and preserve all of the detail and bandwidth,” said co-creator Don Munsil. “Chroma patterns are especially tricky, because you can’t create them properly with full dynamic range in the RGB space that most image-processing software uses.”

“We’re especially proud of our Chroma Alignment pattern,” he added. “It allows you to quickly tell if the chroma channel is aligned properly with the luma channel. It’s easy to see an offset of as little as a quarter-pixel, which we think is a first. And it allows you to check both vertical and horizontal alignment. In the old days of analog, vertical chroma alignment was never a problem. But we’ve seen modern players that misalign the chroma channels up or down. Only our pattern can show you that kind of alignment issue, and show you whether it’s a convergence problem or a decoding problem.”

Even a classic pattern like the ubiquitous Color Bars gets the Spears and Munsil touch. “We noticed that lots of color bar patterns have small artifacts at the borders between the bars,” said Spears. “We shifted the borders between bars slightly so every one of them is on an AVC or VC-1 macroblock boundary. This ensures that there is no bleed or artifacting caused by compression.”

Spears and Munsil are best known for their analysis and testing of deinterlacing chipsets, so it’s no surprise that the disc includes a full suite of deinterlacing evaluation material. “When we started this project," said Spears, "we found that no existing software could create the special video-to-film pulldown patterns we wanted to generate. So we built our own pulldown generator. We built our own video editor and text overlay generator as well. This disc really fits the Spears & Munsil motto: Hand-Forged Video.”

“Bottom line,” he said, “this is the disc Don and I wished we’d had when we started creating the DVD Player Benchmark™ and Progressive Scan Shootout.”

About Spears & Munsil
Stacey Spears and Don Munsil have written many seminal articles, together and separately, on inside secrets of video decoding, processing, and deinterlacing. They are inventors or co-inventors of multiple patents in video and image processing. They set a new standard for evaluation of DVD players with the DVD Player Benchmark™ and Progressive Scan Shootout at Secrets of Home Theater and High Fidelity®. They were the first to publicly document and explain the well-known chroma upsampling error in MPEG-2, H.264 and VC-1 decoders. They created standard-definition test and calibration discs for Anchor Bay Technologies. They have done video encoding and compression for multiple HD DVD and Blu-ray discs, and have consulted for and produced test patterns and evaluation material for a variety of video and consumer electronics companies.

Read the Complete Thread
supervij posts on December 05, 2009 10:33
I used the Spears & Munsil BD calibration disc the day that I received my Oppo 83. I had the TV previously calibrated using the DVE DVD, and to my surprise, I found I didn't change one single setting in the TV. Everything was already at the optimum settings. (Glad I didn't pay extra for this BD!)

adk highlander, post: 655564
Josten have you been through this disk? What patterns did you find most useful?

Only some of it. I haven't used it to calibrate really, and have been using Avia and DVE. My friend's been borrowing it for the last couple of weeks.

Sorry. From your explanation of the differences between the two settings, you are going to have to choose one compromise over the other. If you want the best of both worlds, you might need a new projector.

The reviews on this PJ, IIRC, is that good shadow detail could indeed be had. Epson might give you the darker black, without quite as much detail in there, and yet be more impressive to many viewers because of the pop of other lighter colors on top of the black. JVC will give you both the inky black plus the shadow detail along with it, and since there is no DI, you get the pop too. I dunno, that's just my preliminary impressions after researching for your other thread, so definitely don't take my word on it. Sorry again that I can't help you better.
jcilforever posts on December 04, 2009 15:10
Is it really better?

I have the service remote control for my Pioneer Kuro and have adjusted it to the predefined numbers that have come out and it made a huge difference.

If I now use this disk is it really going to improve my veiwing? I have had it sitting in the drawer for 3 months now and not seen enough talk about it on the net to cause my curiosity to pull it out of the drawer.

Obviously it is not going to do any good sitting there, but I am from the school of if you have a good product than word gets around. Case in point the OppO BDP-83 ( I am pleased above and beyond expectations).

Another case in point this dead thread.

How many have used the disk now?

I have been through setup now a few times and each time I come away with different settings but I'm still not totally happy with my results.

I have been corresponding with someone over at AVS who has the same projector and he game me his settings. I used them just to see the differences compared to what I have been using. He drove the contrast all the way down and the brightness up quite a ways. This makes the test pattern contrast pattern come out perfect so shadow detail is good but at a loss of color pop and my blacks are more grey.

Josten have you been through this disk? What patterns did you find most useful?
majorloser posts on May 03, 2009 09:08

Stacey Spears, post: 559505
I don't have enough posts yet to provide a link, but if you head on over to www.spearsandmunsil.com website, we have published the first article on using our disc.

We have also published a short article on using our new blue filter. The filters should be ready soon and will be sent to everyone who has already ordered a disc. We are also producing a small run of red and green filters that will be available for sale.

Hopefully I'll receive my copy in the next few days with the OPPO Blu-ray I ordered.
Post Reply