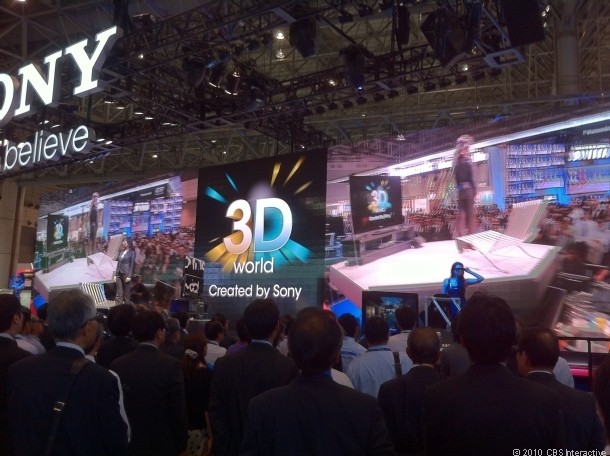 Sony showed off possibly the world's largest 3D LED display at CEATEC this week. The oversized display is modular, though you can't see that when assembled, and this iteration measured over 70 feet wide by 16 feet tall. The Sony HD 3D LED Display System was the same one used to broadcast the World Cup match between Japan and the Netherlands this summer. SO far it's just a show piece and the company hasn't offered it up for sale in the commercial marketplace. I think it would look perfect in my back yard for our annual Super Bowl party.

The high definition LED display at CEATEC was made up of 345 tiles that each include 9 square display modules. It's not tony, at 6-inches in depth, but that's just going to have to suffice until the day we can roll out a sheet of OLED-covered plastic. Since the system is modular, the screen size is really just a matter of video processing power. Since it's really just a series of fast LED displays, making it 3D-capable was simply an issue of using the right source technology (Sony used Cyan/Magenta glasses to avoid any active glasses requirements). Check out the specs of the screen system used at CEATEC: