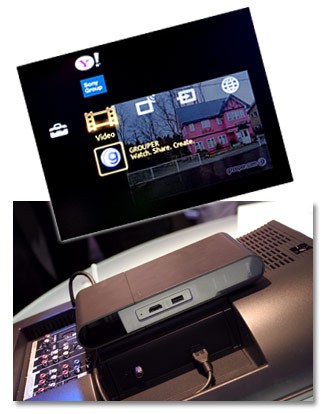 Sony, it seems, will never learn. Perhaps when one loses so many gambles on proprietary formats they adopt an attitude that "surely this one will work!" Who know, maybe this new product Sony is shipping next month will be the golden egg laid by the Japanese goose. In a direct challenge to AppleTV, Sony is pushing out its Bravia Internet Video Link which will cost consumers $300 and streams video over broadband connections to compatible Sony Bravia TVs

The device connects to Bravia televisions via USB and HDMI ports and compatible TVs are now shipping which contain a bracket on the back for holding the device which is apparently the size of a paperback book. Content will be sourced from Sony's movie and music division as well as Yahoo, Time Warner's AOL and Grouper. Sony will announce more partnerships as they emerge.

Video on this device, unlike Apple's unit, comes directly through braodband and doesn't require a PC to be connected to the Internet. The device also doesn't provide any storage, not does it allow surfing of the Internet from the television, something that Sony's researchers said was simply not a requested feature for televisions.

Whether these types of products can compete with VOD offerings from cable or satellite remains to be seen. One thing that sets them apart is the lack of connection between the cable and satellite companies and Internet sources like YouTube (who recently inked a deal to be accessible through AppleTV around mid-June. One thing is for certain, the industry is absolutely ful of proprietary formats, devices and services and that is leading to very slow and disjointed adoption levels from consumers. Someone needs to step up and take away the barriers that are keeping consumers and content separated - who that is remains to be seen.