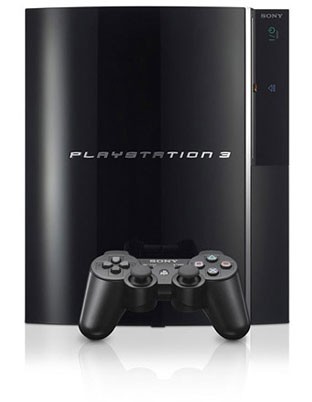 It's being reported via "industry insiders" (buyers) that Sony Consumer Entertainment America (SCEA) will follow Europe with a $399 40GB PlayStation 3 on November 2. This version, like its Euro counterpart will lack the PS2 "gene" and be unable to play the older titles.

The mysterious and nameless consortium of "analysts/buyers" are working with the understanding that Sony will bring a $399 version of the PS3 to market well before Black Friday in order to better compete with top-selling Nintendo and #2 Microsoft Xbox 360 this holiday season. According to a new report in The Hollywood Reporter, which cites an industry source, the $399 PS3 will actually go on sale starting November 2.

The report added, "A buyer for a major game retailer cited the same date, adding that SCEA has been dropping hints that stores should do all they can to clear out existing inventory in anticipation of the new model." While Sony had previously confirmed that the 60GB version will no longer be produced, it's not clear if the company will at the same time slash the price on the 80GB SKU (currently $599) down to $499.

Like the 40GB model just announced by SCEE, the new $399 PS3 in the U.S. is said to come with just 2 USB ports (instead of the four on current US models), no multi-memory card port, and it is expected to lack any backward compatibility with the PS2.

This may be yet another move to push more Blu-ray Disc technology into the homes of consumers. With the upcoming Spiderman 3 expected to release around the same time, it's a safe bet that some of the rumors of a bundle may have merit.

I'll be out of the country when this releases so i will probably send my brother to pick one up for me.

Good job, Sony.
avaserfi posts on October 15, 2007 15:51
I can confirm that the PS3 has full SACD functionality via HDMI. I use mine occasionally to play multichannel SACDs so no worries there. Also, I have yet to hear a report on the feature being removed from the newer models as it is completely software that is already fully developed.
j_garcia posts on October 15, 2007 15:48
I've tried it out and it works. I don't have a HDMI receiver though, so I can only get stereo via the component connection which I only used for the first few days I had it. I have 2 SACD players so I haven't really had a need to use it, but I tried one disc and it recognized it as SACD.
gmichael posts on October 15, 2007 14:30

I could not find that link that showed it didn't play SACD'd. But I did find several that say it does. Good news, but I'll be checking closely before I buy.
gmichael posts on October 15, 2007 13:16

Sorry, I've been away. I'll try to find that link again.
Post Reply