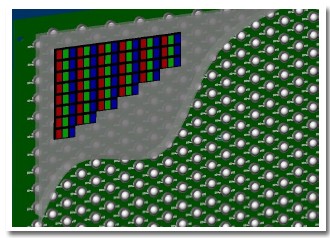 Philips had been in a track to enhance its Aptura intelligent flourescent backlighting system for future displays, however advancements in LED backlighting technology have prompted a suddent, though somewhat quiet, change. We hope - for the better.

Aptura was a system that utilized high-output fluorescent lamps, operating in scanning mode, which canceled out the sample-and-hold effect - a major characteristic of LCD technology. This created an extra degree of motion sharpness for Philips LCD panels - at least to the eye, which was tricked by the flickering backlight. Unfortunately, underneath all the glamour- it was still a flourescent backlight technology.

And now Philips has dumped Aptura and moved on to LED-based (light-emitting diode) backlighting technology, which promises better black level output and even thinner overall panels.

LED backlights are already hitting the industry, with some models by Samsung shown at this year's 2007 CES Expo. The bottom line is, like all new developements and technologies, it may take some time before LED backlighting for LCD displays makes its way into to the lesser expensive (entry- and mid-level) consumer models.

LEDs utilize no actual bulbs, and therefore last a long time - in addition to utilizing much less power per lumen output than other technologies. The use of LED technology also allows LCD panels to use a more direct pixel-per-pixel lighting technology that will allow them to achieve truer black levels currently unavailable to traditional LCD falt panels - and without sacrificing light output.

Philips Lighting has a unit called Lumileds which is the world leader in bright LEDs, so it only figures that this technology will quickly make its way into their line of consumer products.