Wouldn't you like to be able to read off the screen of your laptop in direct sunlight? Your mobile phone battery to last much, much longer? Or your next flat screen TV to be less expensive, much flatter, and even flexible? Thanks to a breakthrough technology called Organic Displays, this could soon be reality.

Although the technology behind Organic LED (OLED) displays is pure chemistry, the applications are much more everyday - mobile telephone and television screens, laptop and stereo displays, car navigation systems, or even billboards.

This OLED technology is based on a revolutionary discovery that light-emitting, fast switching diodes could be made from polymers as well as from semiconductors. Starting from a standard LCD glass covered with structured ITO (Indium-Tin-Oxide), the polymer materials are applied by precision ink jet printing. Using this technology, pixels of red, green, and blue material are applied. After the patterned cathode has been applied via metal evaporation, the cell is sealed.

Philips states that the big advantage of the manufacturing process is its simplicity and therefore its potential for low cost; only a very limited number of process steps are needed. This procedure requires fewer manufacturing steps than the manufacturing of LCDs, and, more importantly, fewer materials are used. In fact, the whole display can be built on one sheet of glass or plastic, so it should be cheaper to manufacture. Philips' thin-film PolyLED technology will enable the production of full-color displays less than 1 mm thick. Combined with a large viewing angle, high brightness and contrast, and full video capability, PolyLED displays are ideal for the next generation of information displays.

The LS633 camera represented a major milestone in the development and manufacture of OLED displays exhibiting more vivid images and crisper video to consumer electronics. The Kodak display AM550L features 165-degree viewing on a 2.2-inch screen that is up to 107 percent larger than the LCDs on most cameras.

OLED display technology from Kodak is already found in car audio components manufactured by Pioneer and cellular phones marketed by Motorola and Sanyo . With ongoing research conducted by Kodak and its technology licensees, the applications for OLEDs continue to expand, making it clearly the display technology of the future.

Not only can they provide brighter, better images at a lower cost, but best of all: Organic Displays use a material with self-luminous properties that eliminates the need for a backlight. While backlighting is a crucial component to improving brightness in LCDs, it also adds significant cost as well as requiring extra power - which, for instance, translates into the heavy batteries in your laptop. With an organic display, your laptop might be less heavy to carry around, or your battery lasts much longer compared to a laptop equipped with a traditional LCD screen.

Polymer LEDs have several inherent properties that afford unique possibilities, such as:

One big advantage of plastic electronics is that there is virtually no restriction on size. Conventional semiconductor components have become smaller and smaller over the course of time. Silicon is the base material of all microelectronics and is eminently suited for this purpose. However, the making of larger components is difficult and therefore costly. The silicon in semiconductor components has to be mono crystalline: it has to have a very pure crystal form without defects in the crystal structure. This is achieved by allowing melted silicon to crystallize under precisely controlled conditions. The larger the crystal, the more problematic this process is. Plastic does not have any of these problems, so that semi-conducting plastics are paving the way for larger semiconductor components.

With the increasing popularity of LCD screens to replace the conventional picture (cathode ray) tube, PolyLED should emerge as another suitable candidate. A screen based on PolyLEDs has obvious advantages: the screen is lightweight and flexible, so that it can be rolled up. With plastic chips you can ensure that the electronics driving the screen are integrated in the screen itself. Other applications of the PolyLED are luminous information screens of almost unlimited size, for example alongside motorways or at train stations.

Since the discovery of polymer-based light emitting diode (LED) in 1989, Philips has been working on PolyLED. Today, Philips is the first to ship monochrome PolyLED displays in mass production. Philips Research is now concentrating on the development of PolyLED technologies for next-generation full-color displays and on ways of integrating PolyLEDs into flexible displays. 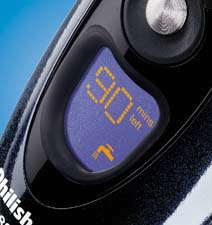 Launched in September 2002, the Sensotec Philishave is the first ever product equipped with a display based on superior PolyLED technology and is prominently featured in the latest James Bond movie, Die Another Day.

Some of the challenges OLEDs have to face:

While the last issue may be quickly resolved due the nature of the OLED manufacturing process itself, the first three items have yet to be proven and undertaken. OLED technology has to go from novelty to practical competitor in a market that is constantly evolving to exceed and extend beyond its current boundaries. LCD screens are getting faster and faster, while Plasma displays continue to drop in price and go up in performance (check out some of the latest "real-world" contrast ratios achieved by Pioneer and other manufacturers - they rival or exceed that of many high-end direct view CRTs and RPTVs).

We're not sure how fast OLEDs targeted towards home theater or computer display are going to flood the market (Kodak is banking on it happening quickly), but the dam is under stress and the onslaught of consumer devices, once the manufacturing processes are firmly established and optimized, should make for a fantastic "display" of products - one we're looking forward to monitoring.