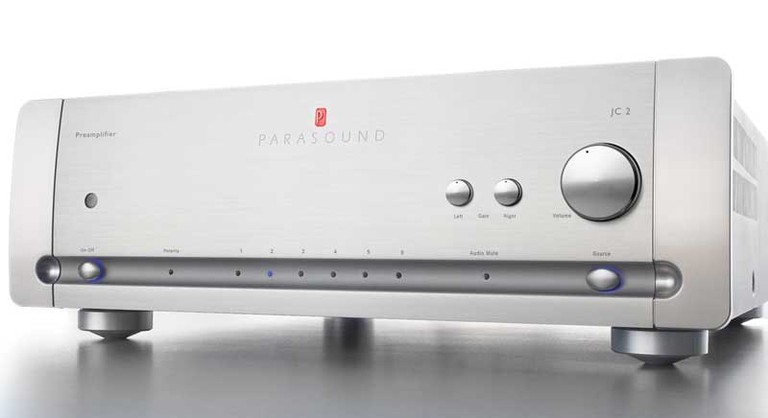 SAN FRANCISCO - June 20, 2007 - Parasound is now shipping the JC 2 stereo preamplifier in its high-end Halo product family. The Parasound Halo JC 2 was designed and engineered by the legendary John Curl and CTC Builders team who have been responsible for some of the most highly regarded audio components of the past 25 years, including the acclaimed Parasound Halo JC 1 400-watt mono power amplifier.

The Parasound Halo JC 2 is a precision analog stereo preamplifier that audiophiles will use to switch between audio source components and to control the output level of the connected power amplifier. While this role may seem relatively simple, many designers and engineers have devoted lifetimes to getting it right.

According to Parasound's president, Richard Schram, "We conceived the Halo JC 2 in the spirit of the JC 1, commissioning John Curl to design a two-channel preamplifier without compromise. The resulting product achieves a higher level of sonic and measured performance than any preamplifier since Parasound was founded in 1981. The sound of the Halo JC 2 is alive with musical detail against a silent background that will give serious audiophiles both the opportunity and desire to re-explore their music collections."

The Parasound Halo JC 2 reflects Curl's genius for circuit design and performance, expressed through Parasound's obsession with quality, functionality and value. The JC 2 employs fully-balanced inputs and outputs with professional-grade XLR audio interconnections for the lowest possible levels of noise and distortion. It also has standard un-balanced connections, plus exceptional facilities for interfacing with integrated home control, remote control and other modern integration technologies.

The Parasound Halo JC 2 is now available from select Parasound dealers. It has a suggested retail price of $4,000.

Founded in 1981, Parasound Products, Inc., is a privately owned U.S. company that specializes in providing affordable audio and home theater components to the critical listener. For more information and dealer locations, visit http://www.parasound.com or call 415 397-7100.