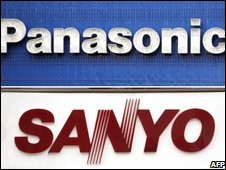 Panasonic, formerly known as Matsushita Electric Co. and Sanyo have begun merger talks this week. A deal would make Sanyo a wholly-owned subsidiary of the Japanese consumer electronics giant. The latest rumor has Panny ready to spring as much as $10 billion to close the deal. However, such a deal could mean less to the electronics consumer as it does to the automotive industry.

Panasonic has been given permission to talk to the banks holding the keys required to drive the merger home. It might not be until December before we hear an update about the merger. Until then, Panny and three major Sanyo shareholders will be wheeling and dealing behind closed doors.

What Makes Sanyo So Valuable?

If you’ve followed the Osaka based electronics brand over the years you’re aware they’re not experiencing the best of times right now. The company has recently sold off its wireless-phone division and restructuring pains haven’t stopped since. But Sanyo does one thing very right. Batteries!

Sanyo is said to hold about 30% of the world’s $6 billion lithium-ion battery market. Nearly all electronics, especially portable gear uses some form of Li-Ion or Li-polymer – but even that market could be a sideshow very soon. Panasonic, already a player in the battery market would combine with Sanyo to dwarf its national competitor Sony. Analysts predict the prospect of a merger creating the Panasonic-Sanyo battery juggernaut could draw out other competitors and drive up the price.

Japanese electronics firms are looking squarely at the rise of the electric car as a huge incentive for a piece of the battery market. If the future of electronics is green, Sanyo gives Panasonic a running start.