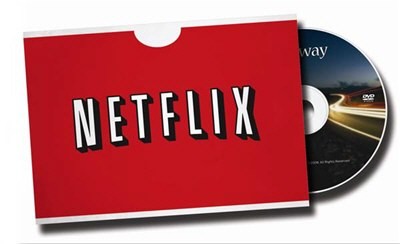 You may experience delays receiving your movie-picks in your next Netflix fix. The DVD-rental subscription service declared it has suffered a serious system outage since last Thursday. The troubles will cause delays in DVD shipments to about a third of its 8.4 million customers.

Reuters says many Netflix centers have resumed shipping this week but some are still reporting this error still which has reared its head as late as yesterday. 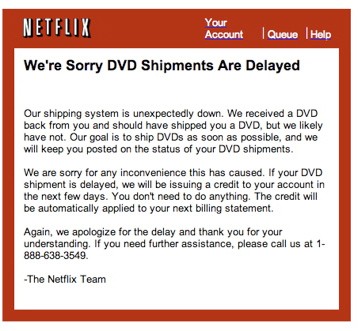 Netflix projects it’ll have all stations up and running by Friday, Aug 15. The problem affected about 55 shipping centers and marks the most serious service outage ever suffered by the company since it began serving up DVDs through the mail.

The company has been experiencing great success lately in the DVD mail-rental business but has been boosted by its online services as well. Streaming video through the Internet means you don’t have to worry about delays or mail order shipping. But you may trade-in shipping troubles for lag and Internet throttling or bandwidth-cap issues when streaming movies.

The Roku Netflix player was reviewed by Clint and gets good scores for value and standard def performance. Netflix will expand its streaming services to other set-top-boxes this year including a new LG Netflix Blu-ray Disc player. Attendees at E3 got wind of the Netflix-Microsoft collaboration to bring streaming movies to Xbox 360 through Xbox Live after the next Dashboard update due this fall.

This isn’t the first time Netflix has experienced a service outage, last time was back in March when it was down for only 12 hours. Affected customers got a 5 percent discount on their delayed subscription. Maybe customers affected by the latest Netflix delay will get an even bigger savings considering this has been going on for a lot longer than 12 hours.

Adam, post: 445686
I thought that it was alright. Probably 2.5 stars out of 5. I thought that the first one was hilarious, but this one didn't quite do it for me. Some parts were very funny, but it didn't live up to the original.

Sounds similar to my friend. From what I can remember he really enjoyed the original but thought this one was almost too dumb and a waste of time. I didn't really love the first one (not my kind of comedy generally speaking) so I don't feel much like spending the time to watch this!
Adam posts on August 18, 2008 11:42

emorphien, post: 445262
Curious to hear what you think of that movie.

I thought that it was alright. Probably 2.5 stars out of 5. I thought that the first one was hilarious, but this one didn't quite do it for me. Some parts were very funny, but it didn't live up to the original.
majorloser posts on August 17, 2008 06:45
I received an e-mail Saturday from Netflix saying they're going to issue a 15% credit for the inconveinence.
emorphien posts on August 16, 2008 22:06