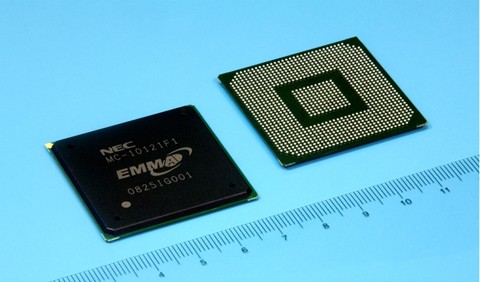 This week NEC Electronics made an announcement that it had developed the world's first single-chip LSI (Large Scale Integration) to integrate the main functions of Blu-ray Disc players. The new LSI is named EMMA 3PF and will begin shipping in sample form during September 2008.

The EMMA 3PF LSI includes all of the main functions required for Blu-ray Disc players such as D-to-A conversion, the digital decoding of encoded images and sounds and an HDMI output. Even the external memory has been integrated as have peripheral functions - resulting in a 50% reduction in the package area. The new LSI supports BD-ROM Profile 2.0 and has a multi-core CPU, which delivers an industry-best 1150 DMIPS (Dhrystone MIPS), and a graphic processing accelerator.

What's exciting is that this new compact package allows for CHEAPER and SMALLER Blu-ray players to be manufactured. While there are other hard costs involved (ie Blue lasers) this is a definite step in the right direction for an industry in desperate need of an across-the-board price drop.

According to NEC, the EMMA 3PF has the following main features.

The EMMA 3PF seems to bear a lot of potential for helping bring low-cost Blu-ray Disc player systems to market and we'll be looking out for additional advances which make the players less expensive to manufacture.

Read the Complete Thread
j_garcia posts on August 08, 2008 14:40
The sales numbers per title are much lower for BD vs DVD, which is almost certainly why the cost of the discs is higher, as well as higher production costs to some extent due to lower volumes - as well as new gear needed and remastering activities. That will drop off eventually, and having lower cost players out there to get more people buying movies will make it easier for the big names to increase BD production and scale back SD production. Lower cost players can only help.
fmw posts on August 08, 2008 06:36
I don't think anything would help the industry as much as an across-the-board price reduction in software.
Post Reply