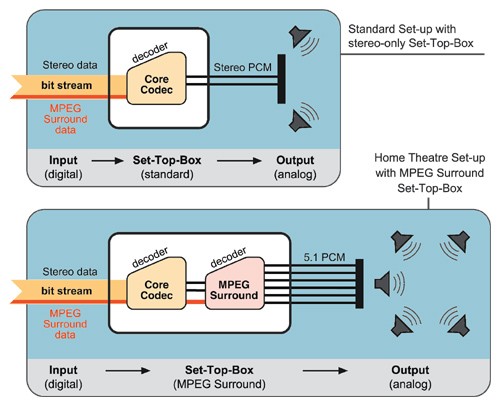 We're always interested in technology that will allow us to enjoy better sound at lower bandwidths. Why? Not because we like compression, that's for sure. But because with the advent of HD and streaming, we need a way to get more information into smaller packets with less loss. MPEG Surround is a brand new, feature-rich open standard compression technique for multi-channel audio signals. Created by a partnership of Fraunhofer Institute for Integrated Circuits IIS, Phillips, Dolby, and LSI, it is making lots of promises that we hope it delivers on. Operating on top of any core audio codec such as AAC, HE-AAC and MPEG-1 Layer II, the system provides an unrivaled set of features including:

In combination with HE-AAC, MPEG Surround can carry a five or seven channel surround program at a total bit rate of 64 kb/s or less. That's pretty impressive. The MPEG Surround idea extends traditional approaches for coding of two or more channels in a way that provides significant advantages, both in terms of compression efficiency and user features. In principle, a compact set of parameters representing the spatial image of the original surround signal is transmitted along with an automatically generated mono or stereo downmix. Alternatively, an externally created downmix signal may be used. On the receiving side, a legacy decoder will disregard the MPEG Surround spatial parameters and will reconstruct the downmix. In this way backward compatibility is achieved. In addition, a MPEG Surround enabled decoder will expand the transmitted downmix signal into a high quality multi-channel output based on the spatial parameters.

In addition to this regular method of multi-channel reproduction, the MPEG Surround technology offers a "true-to-life" virtual surround rendering for headphones. In this mode of operation a stereo output signal is rendered, based on the same bit stream as for the multi-channel case. When this stereo signal is played back over standard headphones it yields a virtual surround sound impression. As a consequence, MPEG Surround enables an introduction of high quality surround sound to mobile devices. Traditional techniques for surround virtualization require the calculation of all virtual output channels as an intermediate step of processing. This typically leads to a high complexity. Within MPEG Surround this complexity burden has been mitigated as it directly computes the stereo output signal from the transmitted downmix signal and the spatial parameters.

In order to streamline the introduction of MPEG Surround into home A/V reproduction equipment it offers a matrix compatible downmix mode. In this mode the MPEG Surround encoder produces a downmix that gives an optimal reproduction quality for existing matrix surround systems. Hence, existing A/V reproduction equipment can directly convert the transmitted matrix compatible downmix to multi-channel making use of the present matrix surround systems. Alternatively, A/V equipment enhanced with MPEG Surround can reproduce the original multi-channel signal without repercussion of the downmix modifications.

It is to be noted that apart from the downmixes generated by the MPEG Surround encoder also legacy stereo material can be rendered to multi-channel audio at a high quality. Look for this technology to show up in a receiver/transport near you soon (or so we hope). For more information, please visit www.mpegsurround.com.

This sounds really promising. Can't wait to see where it goes.
Post Reply