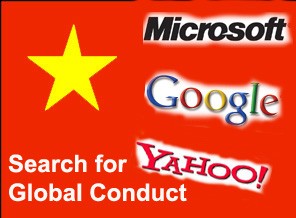 As the Olympics unfold, for better or worse, China’s government seem to get more attention than the athletes. The IOC agreed to let the Chinese government block Internet access even for journalists covering the event. Future international press-events in Totalitarian nations could look vastly different from the Beijing ’08 Games. Microsoft, Yahoo and Google are working on a code of conduct to address how they’ll operate in countries like China.

What’s a tech company to do when its product is regulated or used in a questionable manner by an authoritarian government? That’s the question faced by Yahoo, Microsoft and Google. You can’t blame a tech company for wanting to jump into the emerging gargantuan consumer market in China. A few frayed ethics might be the price for staying competitive, even if your company’s motto is “Don’t be Evil”.

Three US tech industry giants propose a solution. They’re working on a new code of global conduct. The effort is lead by the very US companies that have come under fire in recent years for bending to the will of a Totalitarian regime. The code of conduct seeks to straddle a fine line between competitiveness and ethics in a global economy. When left to act alone, each of the three companies has made poor decisions.

Tech Ethics for a Global Economy

The issue of tech-ethics is as old as mankind’s first manufactured weapons. That antelope thigh-bone can crack the sweet milk from a coconut - but it can also be used for more insidious aims.

Today, Information Technology ethics for a global economy has a new wrinkle. Search, cell-phones, radio (including satellite) and any mass communications devices are designed to keep us connected. They’re the trappings of an enlightened civilization. But what happens when a decidedly unenlightened government decides to use them for its own aims? The issue runs deeper than simply doing what you have to do to get accepted into an emerging market. By its very definition Information Technology only prospers in a free society. Otherwise it’s not information at all, but something else.

Google became all the rage in the late 90s when it offered users a novel idea. It offered a completely unbiased index of the Internet and search results that weren’t hand-picked or the result of advertising. Google changed search by being more than a tool for advertisers. In China, Google has stopped…well… being Google, and that can only be bad for business. Google.cn is just a form of government malware.

Hearings began in May lead by Sen. Dick Durbin, D-Ill. Attendees included Yahoo, Google, Microsoft, Vodafone and France Telecom. Participants say they have reached a milestone and have agreed in principal to these core components in this code of conduct.

The companies involved will be able to make the tougher decisions not to sacrifice any long-term goals or mission statements when they agree together. With some of the top names in communications on board this new Global Ethics Standard could reach right across the spectrum of all tech companies.

Can we count on all tech companies to agree on a single standard… a sort of global conduct format - if you will? Or, will Sony decide to create its own Global Conduct format to compete with Microsoft? You never know... backed by names like NTT docomo, Matsushita and Intel - it could give the big three search companies a run for its money.

fmw, post: 442071
You gotta love it. The Chinese manage to transfer trillions of dollars worth of wealth to themselves from the U.S. economy and then they have the gall to tell our companies how to run their businesses. Do you sometimes get tired of being the good guy?

Western investors gladly transferred their wealth to China and, for the most part, continue to reap great rewards as a result.

The Chinese government can tell businesses how to operate in their country. The U.S. government could have insisted on a comprehensive bilateral trade agreement like the FTA to prevent the Chinese government from pushing around Yahoo! and other American companies, but it did not. The American people would not have allowed their government to leave China to the Europeans because of human rights concerns. Large corporations like Microsoft and Google would have used their lobbyists, campaign donations and influence to ensure that China remained open for business to Americans.

I'm not endorsing the Chinese government's behaviour, but no one forced Google, Yahoo! or anyone else to do business there. They knew, or should have known, what they were getting into. If they're not happy, they can leave.
jamie2112 posts on August 07, 2008 09:48

fmw, post: 442071
You gotta love it. The Chinese manage to transfer trillions of dollars worth of wealth to themselves from the U.S. economy and then they have the gall to tell our companies how to run their businesses. Do you sometimes get tired of being the good guy?

YES…………
fmw posts on August 07, 2008 09:00
You gotta love it. The Chinese manage to transfer trillions of dollars worth of wealth to themselves from the U.S. economy and then they have the gall to tell our companies how to run their businesses. Do you sometimes get tired of being the good guy?
corey posts on August 07, 2008 06:15
I think that the major owners of all three companies have made their positions clear: They have no morals, only greed. They have chosen to add to their already vast wealth, at the expense of most Chinese & all US interests.

It would be great if something other than white wash, business as usual, came out of this; but I doubt it. If they truly cared, it would have already been done.
Post Reply