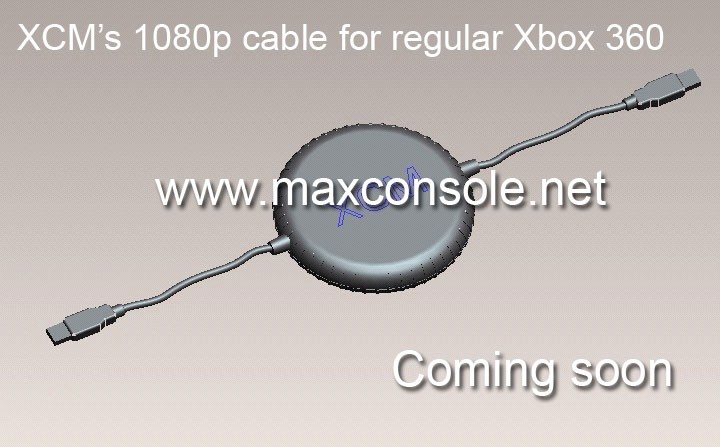 OK, this one is brief but very interesting - especially if you were thinking about trading up your Xbox 360 for the new Elite version hitting shelves. The extra costs gets you a shiny black box and some more storage but the real attraction is the HDMI output. Well, according to MaxConsole.net, XCM has announced pending availability of a new cable that will allegedly allow 1080p output via HDMI from current Xbox 360 models.

Too good to be true? We'll find out in 4 weeks when the company is rumored to release the product. The cable is reported as being nearly completed and will pimp up our existing "white" Xbox 360s to 1080p HDMI goodness.

We're hoping the cable works by pulling the digital information directly from the board via the Xbox 360's interface, however there is another possibility. The cable could actually perform an analogue-to-digital conversion and multiplex the AV signal into an HDMI-HDCP output. This would be similar to this product from DVIGear. While this can be effective, it is not as desirable as a native "from the video processor" HDMI output.

There's also the issue of "why". Why would we need HDMI when the current Xbox 360 is fully capable of transmitting 1080p via component? Well, the reason is that pesky HDCP everyone hears so much about (but probably doesn't understand.) Currently there are next to no display devices on the market that accept 1080p via component video - this is due to the inability to offer HDCP content protection/DRM over component video. As a result, 1080p can really only be sent via HDMI or DVI-D (with HDCP) as an industry standard. If you don't require 1080p, then there's no reason to think that this cable or HDMI in general is going to make your Xbox look any better than the current component video technology running at either 720p or 1080i.

We'll find out and bring you more if/when the product releases next month.

Read the Complete Thread
avaserfi posts on June 26, 2007 19:12
Pretty interesting and nice for someone to make a solution that doesn't involve selling and buying a new system as I know a few of my friends have atleast though about doing until I talked them down (most don't have a display that makes it worth while and none have a HD-DVD attatchment).
Post Reply