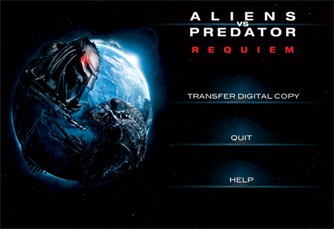 Digital Copy features - but not for Canadians!

Two notable DVD and Blu-ray releases are available this week - Juno and Aliens Vs Predator: Requiem. Juno wins an Oscar for Best Original Screenplay that went to blogger-turned-screenwriter Diablo Cody. AVP: Requiem has, um... killer aliens and , um... promises a sequel which will not suck as bad as the first AVP.

Both movies are 20th Century Fox productions and the Blu-ray versions of both include dts-HD Master Audio soundtracks.

Both discs offer the new Fox feature 'Digital Copy'. This is an extra disc included at no extra charge in your DVD or Blu-ray versions of the movie. The disc holds the controls for syncing a copy of the movie onto your computer or portable device using either iTunes or Windows Media Player. 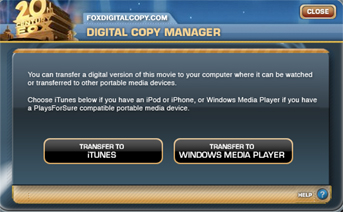 Fox seems to be blazing the trail by lightening up digital restrictions on movies. I can’t say the ability to watch Juno or AVP: Requiem on an iPod Video is something I’ve always wanted. But it’s good to see the man lightening up on Digital Rights Management.

Hold on! The digital copies don’t simply reside on the DVD itself. They’re actually invitations to sync with an outside source to obtain the movie files. That means they’re subject to certain restrictions – namely…

…if you’re trying to sync the movies from Canada, Fox says: No Way, Jose!

Not only are the digital copies simply not available in Canada but there is no warning. Canucks will spend time as I did this morning fumbling around with unresponsive buttons and unspecific error messages before using Google to find out nobody in Canada can get their digital copies. Fox hasn’t said a word about it yet. The disc’s support-800 number simply doesn’t work from Canada.

The movies simply aren’t for download in Canada yet. We probably have some cross-border licensing issues to thank. One way to sidestep the issue is to create a US iTunes account. But maintaining an extra US iTunes account just to get a digital copy of a movie might be a little more than most people can handle without serious anger management training. Would it have been too much for Fox to provide some info on what’s going on?

Way to keep us updated, Fox! Late spring and bland politicians weren’t enough for us up here, now we get Fox kicking leftover April snow in our face.

Jim Robbins, post: 402525
If the U.S. would just have the mind set of taking over all the adjacent countries in a forceful military sort of way,

You're right, invasion/occupation (as you're all too aware) costs way too much.

On the other hand. To let Canada join the US (more Canadians than you might expect would be totally on board) would actually be unpallatable to Americans.

Capitol Hill wouldn't accept the provision to its Electoral College of ten odd more states with the voting habits of Rhode Island.

Just think - if the US only elected Democrats and Canado-Tory-Liberals for twenty-some-odd years straight it would resolve the US deficiut (a feat that eludes so called American conservatives) - but only at the expense of Lockheed Martin, Northrop Gurmman, Raytheon, Haliburton and a few others.

Just think of the chaos that would ensue with lobbiests in Washington!

The other option is making Canada a series of territories like Puerto Rico. But Canada has more oil than Saudi Arabia and more fresh water than the US and Russia (fresh water is the new oil in 2020). It's at least earned the right to statehood. Maybe you could secretly make a territorial arrangement with the maritime provinces and Quebec, but I didn't say that out loud.

No, the US gets a way better deal with a (so called) free trade arrangement with Canada and as long as Canada elects Prime Ministers like Harper, the US doesn't need an invasion or have to worry about messy business like occupation for its north-of-the-border lapdog.

Private corporations that forget a whole separate market exists north of border is pretty small potatoes in the grand scheme of things.

Consider that what the entire Canadian consumer market brings to the table for any US corporation (The Gap, Ford, Old Navy or the Piggly Wiggly) is about the size of the state of Florida. The corporations that forget we have unique licensing arrangements can be forgiven. In fact we pretty much expect such SNAFUs as I'm sure residents of Alaska, Hawaii and Puerto Rico have learned as well.

As a Canadian, I'm rooting for you guys! (I'm a Canadian who loves America - so much so I'm a vet of your US Army) I hope the US dollar and economy gets better ASAP - we're relying on you guys - as Dennis Leary said - to control mean SOBs that control **** bombs! I want the US dollar to be the world's currency. The Loonie is just a small buffer that can't hide from US dollar devaluation forever.

Being such close neigbours we get all the economic benefits of the world's premier super power - a neigbour with whom we can speak English, and we don't have to deal with your unique health care arrangements.

GO USA!
allargon posts on April 18, 2008 19:45
AVP sucks just like Craptastic Four and every other day and date action flick Fox has released on Blu-Ray. I will give them props for Juno.

I enjoyed both for different reasons. I thought AVP was fun but it could have been much more. The biggest problem folks had with AVP (other than plot) was that it was rated PG-13 and thus less vicious than other Aliens movies.

The AVPR folks took that to heart. BOY DID THEY TAKE THAT TO HEART!

The killed off almost everything that was good and pure. The only thing they left out was kittens. They got small boys, lead characters, puppies, pregnant women, babies, the list goes on and on.

If they had impaled a kitten I think the movie would have been a great success (tongue in cheek).

I remember walking out of the theater with my jaded moviegoing companion saying to myself “Damn! They held nothing back!”


Definitely not good cinema but it now holds a special place in my heart for greatest overreaction to fan complaints!
Jim Robbins posts on April 18, 2008 11:51
If the U.S. would just have the mind set of taking over all the adjacent countries in a forceful military sort of way, then we wouldn't have these problems. Of course, military expansions will cost money, so all the current Canadian citizens will have to give up half their pay to cover the invasion.

In all seriousness, it's stupid to have restrictions like this. Of course we aren't the same country, but really, we use the same technologies, have the same standards, and heck, the dollar is virtually the same value now. I don't see why it even matters. Gah!!
Wayde Robson posts on April 18, 2008 09:07

Shadow_Ferret, post: 402438
I enjoyed AVP. Pure mindless fun. If AVP: Requiem is better, then it's going in my netflix queue.

That's about where I'm at with these movies. I can definitely attest to the sound being awesome! Killer bass and lots of front-to-rear effects especially in the outer space scenes. It's worth a rental at least if you have a blu-ray player and can hear the DTS HD MA soundtrack
Post Reply