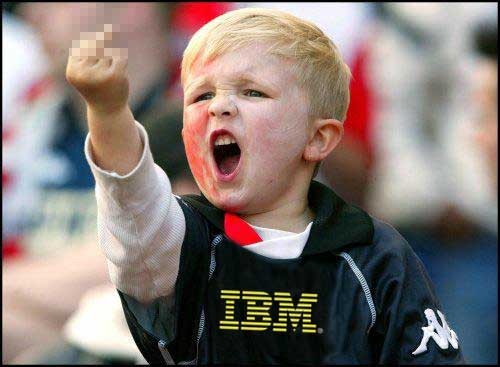 That's right. IBM is seeking to turn the industry on its ear in an attempt to levy additional ways of bringing marketing and advertisements into the living (or better stated, theater) room. Not content with DVDs which flaunt unskippable French, English and Italian Interpol warnings, IBM has just submitted a patent application whereby users could have their DVD rentals interrupted periodically throughout by - no this is not a joke - commercials. Text from the patent application reads as follows:

If you think this could potentially be a good idea then guess again. The mobile electronics industry (mentioned because they could potentially have driven an entirely new market through the introduction of ad-driven phone-deployed content) has proven that embedded advertising will never be considered "enough" revenue to replace content fees entirely. So those of you hoping that perhaps this would usher in an optional age of free movie rentals are likely to be disappointed. What is more likely is that already-floundering brick and mortar stores will offer some kind of discounted rental fee in exchange for providing movies that include these interspersed commercials.

More than likely, however, the idea will simply flop. Here's why, as we analyze each market:

Brick and Mortar
Already struggling to stay relevant in an age where DVDs-by-mail are increasingly dominant, Blockbuster is playing catch-up and losing in the war of convenience-meets-value. While not in danger of going under complely - at least not for a couple more years, Blockbuster would be insane to fractionalize its services with the introduction of a new type of DVD rental that embedded commercials - even if their rental fees were lower as a result.

NetFlix
Netflix is already in a position of dominance with respect to the DVD-by-mail category and it won't disrupt that anytime soon by introducing a backwards-leaning system of ad-laced DVDs. More likely, they would arise as the staunch defenders of plain-Jane DVDs and decimate any company that attempted to charge "both ways" for DVD rentals.

The Unknown Competitor
This is really the only possible winner in this scenario. Should IBM connect with a company that could make sufficient funds from advertisements (doubtful considering the nature of the 1-person, 1-play demographic) they could potentially be involved in a newcomer who charged nothing for DVD rentals and instead made all of their money from in-DVD advertising. Again, this should have been the way the mobile electronics market debuted mobile TV, but if they can't let go of residuals it's doubtful any newcomers will be able to as well.

Why This Probably Won't Go Anywhere

OK, so now that we got you all riled up, what's the prediction? Simple. This is yet another patent that won't go anywhere for a long time, if ever. It involves a significant hardware modification to introduce new players on the market (non-HD no less) as well as an Internet connection (so the ads aren't hard-coded on the disc). Any time you ask a consumer to jump through hoops just to save a few dollars you're likely to end up losing your shirt. Anyone who puts money into this patent is probably going to lose, and lose big.

Where this concept has traditionally made sense (and can be demonstrated today) is online with respect to studio websites that offer free online versions of their TV shows with mandatory, unskippable commercials. Check out NBC's Heroes, for example, which allows users to play full episodes and watch commercials only periodically (from Ask.com for example). The difference, of course, is that they are using this for the most part as value-added to sell television spots or to market related Internet properties. While it may be possible to purchase a spot separately for this online downloadable content, I have yet to see any that aren't mirrored by affiliates or existing television-based sponsors.

IBM has a neat idea and I'm sure there are some who would love to pay a dollar or two less for their DVD rentals, but by marketing it solely and specifically to the DVD (not HD-DVD) market and relying on brand new hardware and an Internet connection, this is one past-its-prime concept. Various forces have attempted to bring modified DVD hardware to market in the past, but such attempts (especially this late in the game when everything seems to point to HD) have failed.

Tech companies often ask for patent rights for ideas that will never get off the ground, or for things that are impossible for one company to do. Just look at Microsoft patenting concepts about user interfaces. The US Patent office seems to be just handing these things out to anybody with a pulse. Just like subprime jumbo home loans.

Although if it did happen, I have no confidence in the American consumer to put their foot down and not buy/rent the dvdvs.
yettitheman posts on November 30, 2007 00:48

Yep, there is an article about it.

yettitheman, post: 335937
You could always work at Apple Wait, now their machines crash too

IBM has been on a slippery slope as of recently…..but, oh well. Who's ready to use Solaris exclusively???

stratman, post: 335606
IBM manages to get by, though I'd be a bit nervous to be employed by them.

You could always work at Apple Wait, now their machines crash too

3db, post: 334967
Thats interesing Strat. IBM just bought out Cognos, a local company of ~1000 employees. If what your saying is true, then the people at Cognos are in for a rough ride

IBM manages to get by, though I'd be a bit nervous to be employed by them.
Post Reply