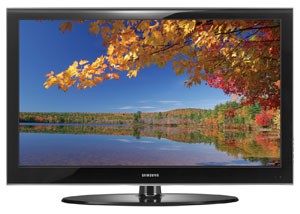 Who would have bet HDTV sales would turn out to be a recession proof industry? But that’s exactly what the number crunchers at iSuppli Corp said on Wednesday. The product that’s long been considered a luxury item has hit a price point that is bucking the trend in this foul economy.

North American and overseas flat panel HDTV sales dipped in the fourth quarter of 2008 from the year before. But sales have rebounded in North America much faster than anyone in the industry predicted. Flat panel TV sales reached 7.8 million in the first quarter of ’09. That’s a 17-percent increase from the same quarter a year before.

While sales are still declining overseas through Q1 ’09, the US rise in sales is either bucking the international trend or leading it.

The market soothsayers over at iSupply claim it’s a phenomena they call “cocooning”. It means people cut back on eating out, going to movies, vacations and other activity outside the house. But they’ll justify a household expense in hopes of saving money in the long-run by staying indoors.

But powering the rise in sales altitude is cheap, cheap, cheap! Discount brands and retailers have been the primary beneficiary of the recent sales climb. According to iSupply stats; discount dealer Wal-Mart has nearly matched Best Buy’s sales volume. While Samsung remains the number one HDTV seller in the US, value-brand Vizio leaped ahead of Sony for silver medal. If your selling cheap - people are still buying.