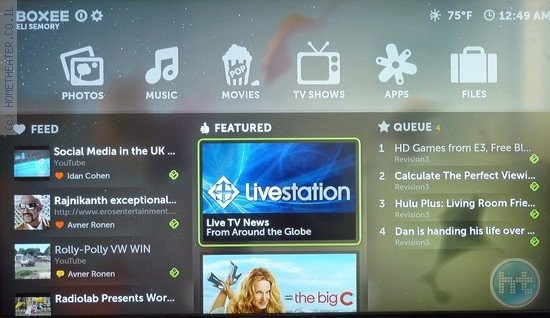 Our friends over at HomeTheater.co.il published the first Hands-on review of the Boxee Box, the first media player from Boxee and D-Link. This is pretty much a world exclusive considering that the device isn't scheduled to ship until November of this year. Of course, it helps that Boxee is a startup company from Israel! For those of you unfamiliar with Boxee, their software can be downloaded already online for free. Boxee lets you watch movies, TV shows and clips from the Internet on your TV or computer. Basically, you install their free software on an affordable computer, like a Mac Mini or Acer Revo, and connect it to your TV (with an HDMI or DVI cable depending on what you have). To navigate Boxee from your couch, you can use an Apple Remote, an iPod Touch, iPad, or one of several PC-remotes available.

Boxee is basically the latest, and possibly one of the most ergonomic HTPC software platform around. It allows users to enjoy movies, TV shows, music and photos, as well as streaming content from websites like Netflix, MLB.TV, Comedy Central, Pandora, Last.fm, and flickr. Not only that, but you can share information about what you’re watching with friends so they can find it legally and enjoy it too. In this way, the review calls it the first "social media streamer". You can even post things you like to social networks like Twitter, Last.FM, or Tumblr. All this from within a visually driven interface.

The remote is two-sided, such that it has a QWERTY keyboard on one side and an ergonomic control surface on teh other for simple menu and system navigation. Images of the Boxee Box itself have been released previously, so it was no surprise to see the oddly-shaped rhombus sitting on a table.

Check out their full review and then comment in our forums to let us know if this is something you might be interested in getting, or if you think it's just one more media server among a mass of products already on the market. In addition, it will be interesting to se how Boxee competes once GoogleTV hits the market and synthesizes Internet streaming media with existing CableTV and satellite TV systems.

Read the Complete Thread
BoredSysAdmin posts on August 20, 2010 11:52
Thanks Clint for finding this gem !
Boxee is closer to ideal htpc (10ft interface) what pretty much anyone else out there
Post Reply