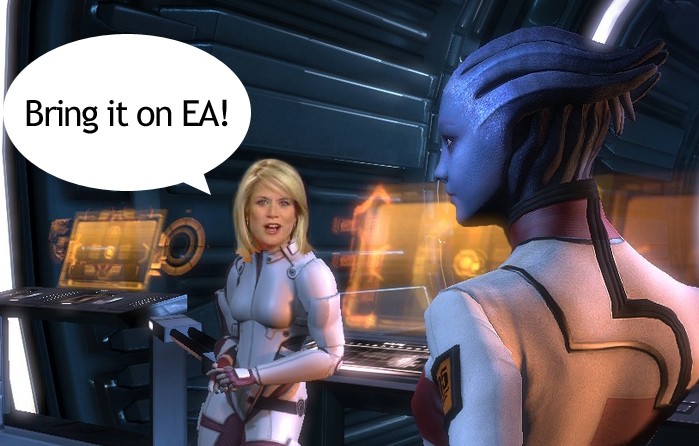 Fox News has challenged Electronic Arts to an on-air monkey court in efforts to expose the naked truth about Mass Effect’s in-game sexual content.  Don’t light that cigarette just yet, the controversy over the new hit Xbox 360 game hasn’t yet reached its climax.

It started with a conservative blogger’s gross misrepresentation of content found in the game Mass Effect. Kevin McCullough has since apologized, setting the record straight for jumping to conclusions in his Mass Effect - “virtual orgasmic rape” story. He wrongly concluded that clips he saw on YouTube were indicative of the whole games content.

Fox News’ Live Desk with Martha MacCallum recently aired a segment that passed the same misconceptions about the game as fact. Disguised a debate it was a typical Fox News piece where talking heads only get enough time to clarify the story’s predetermined outcome. Of course this one was about how bad violent and sexual video games are for young children.

EA, parent company of BioWare the creators of Mass Effect, sent a letter to Fox News. Jeff Brown, EA VP of Communications asked Fox News to retract its story’s inaccuracies about the game. Brown told Fox know there is no full frontal nudity and players do not engage in graphic sex.

Although there are adult themes and situations in Mass Effect it has nothing more graphic than you’d find on Fox shows like OC. And the game it is not marketed at children. Mass Effect is rated M for Mature by the ESRB, a rating system that works as well or better than rating systems for television.

You’d think that would be the end of it. Maybe Fox would revise its statement in its slanted way and be done with it. But today we learned that Fox News has invited EA to appear on Live Desk with Martha MacCallum for another debate. EA has yet to accept the offer.

It's unclear if EA will get a fair shake if they did appear on the show. Too often we've seen the media demonize video game manufacturers by claiming that they are corrupting our children. It probably won’t matter what the EA camp offers in its defense.

But, you know what they say about publicity.

Read the Complete Thread
Polygon posts on February 02, 2008 23:25
I haven't read any of the other posts but I just want to say that Fox is at causing trouble again with absolutely nothing to back them up besides a psychologist that based her opinion on hearsay. Even Jack Thomson doesn't think it's big deal. It's nothing compared to Grand Theft Auto's hot coffee debacle. Then they can't even man up and admit they are wrong.
gliz posts on January 29, 2008 13:34
ok point taken but still…
Rickster71 posts on January 29, 2008 13:19

gliz, post: 366729
this has nothing to do at all with audioholics this should never have been posted this is NOT what I come here for. I come her to talk about hometherter and audio and the ever popular “format wares”, not about this stuff ,this is politics and IMHO has no place here! I don't want to here about someone's hate or dislike for the news please let's get back to gear and stuff.

Well, it is in The Gaming Forum, and it's a thread about video games.
I don't see any problem there.
If this thread stayed exactly on topic; it would be an Audioholic first.
The OP is a Moderator for Audioholics.
You would have to take it up with him.
He is quite reasonable, and open minded.
gliz posts on January 29, 2008 12:42
the adsmin should pull this thread!
gliz posts on January 29, 2008 12:41
this has nothing to do at all with audioholics this should never have been posted this is NOT what I come here for. I come her to talk about hometherter and audio and the ever popular “format wares”, not about this stuff ,this is politics and IMHO has no place here! I don't want to here about someone's hate or dislike for the news please let's get back to gear and stuff.
Post Reply