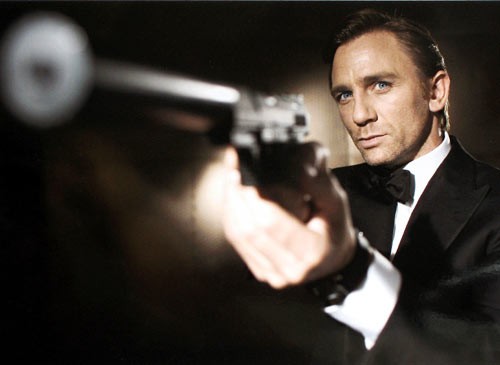 If you believe in the stereotype of techie-geeks as pudgy social misfits, think again! Evidence from two separate studies on human behavior have combined to say otherwise. Lonely geeks of the world take heart! Many of us have an inner James Bond just waiting to come out and slay the ladies.

The results of two separate studies came out today and seemed paint a picture for us fans of the latest technology. Apparently we’re driven, arrogant bastards but if you combine its results with another study – we get the girls!

A survey of 25,000 Americans was conducted by two Internet research firms, Mindset Media and Nielsen Online. It concluded that people who consistently buy the latest technology (whom I count myself among when I can afford it) are assertive, leader types. But at the same time we’re not very modest in fact we may even be given to boasting. The tech-maven with leadership qualities is “forward facing” and “interested in what’s next” according to Sarah Welch, research lead at Mindset.

This particular study rated people from one to five in twenty different traits including creativity, self esteem and spontaneity. Those who were low in the modesty department were said to be guilty of making purchases for status or had the tendency to purchase luxury brands. This seemed to indicate that we consider it a badge of personal honor to keep the latest HDMI 1.3a hi-def home theater gear or walk around town with the 3G Internet browsing mobile device.

Another study conducted by Mindset earlier this year found that Apple fans tended to be open minded and liberal but also felt they were superior. We already knew Mac-heads were liberal elitist snobs, now it’s been proven by Mindset Media.

Consider the traits of us early adopters. We’re often impulsive, they like to try new things. We’re also natural leaders given to a sense of privilege, superiority or one might even say narcissism over our high-tech ways.

Research performed at New Mexico State University has identified a “dark triad”. The trio of characteristics is generally considered negative and makes some people into social misfits. But when certain individuals can temper these traits they combine to create a Machiavellian womanizer in the spirit of James Bond.

The negative traits include narcissism, a strong desire for power and dominance and a lack of empathy. These traits are often combined with an openness to try new things, impulsiveness, which makes many men lucky with women simply because they try their luck more frequently. The same traits can make some men into early tech-adopters.

The University of New Mexico study surveyed 200 students for the characteristics psychologists have dubbed “dark triad”. These consist of the tendency to lie, narcissism and impulsive behavior.

The next part of the study related to attitudes toward sex and promiscuity. They found that men who ranked high in the “dark triad” characteristics also had the most sexual partners. The results were brought before the Human Behavior and Evolution Society conference in Kyoto, Japan this month.

Peter Jonason who led the study likened the traits to the James Bond. The iconic 007 character is a legendary womanizer and seems to bear all the traits of the dark triad. Not to mention he’s a legendary gadget aficionado.

The two studies were completely separate but happened across my daily news-reader at the same time. It was more than fate that had me read about the two studies one after the other, the two character traits have remarkable similarities.

So don’t buy this garbage that us techie-geeks have to be shy, passive schmucks who let the chicks pass them by. Next time you’re picking up a NiMH power pack for your mobile device - be sure and ask for it shaken and not stirred!

birdonthebeach, post: 425338
Feel free to call me what you want, but trust me, LIBERAL does not apply!!!

zRmDgMHBrRc
westcott posts on June 23, 2008 11:45
I am going to go crack open an “Arrogant Bastard Ale”, crank up my reference sound system, and get back to you on this one……………………………
krajnik posts on June 23, 2008 02:50
So, let me get this straight… males who exhibit the “dark triad”, which includes a propensity for lying, also tended to have more sexual partners…

Might they have been lying about how many sexual partners they'd had?
astrodon posts on June 21, 2008 19:43

davidtwotrees, post: 425256
Oh, I don't know……I guess early adopters might be geeks. But most people I know or work for with the latest greatest usually aren't geeks…….they're rich. Moolah. Someone that buys the new Denon Seperates, or the Mark Levinson Media Console, or the Krell Theatre system might be a geek, but you can bet your bippy they've got a lot of disposable income……..

majorloser, post: 425268
“…Apple fans tended to be open minded and liberal but also felt they were superior. We already knew Mac-heads were liberal elitist snobs, now it's been proven by Mindset Media.”

Feel free to call me what you want, but trust me, LIBERAL does not apply!!!