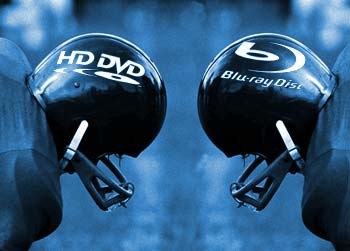 In what is no stunner to anyone at Audioholics, Consumer Reports reviewed nine high definition optical disc players and guess what they concluded?

There are no significant performance differences.

The top Blu-ray performer was the Pioneer DBP-94HD and the top HD DVD player was the Toshiba HD-AX2 and guess what they concluded?

Both players received a score of 91% for picture quality.

All the players generally performed uniformly well with HD content but were more variable when upscaling SD video to quasi-HD quality. The difference in average score can be attributed to the differences in upscaling performance and from the entry HD-A2, which was the only player limited to 1080i output. But as various writers on Audioholics have pointed out previously, 1080i has no loss in detail compared to 1080p when utilizing a good quality deinterlacer.

Considering that both formats use the same video codecs, this is no surprise.

Blu-ray and HD DVD both support MPEG-2, MPEG-4 AVC, and VC-1 video codecs, which are the actual basis for picture quality. The discs themselves are simply data storage, containers.

Yes, there is some variation to how the containers work, but bits are bits. The same video data bits come out of a VC-1 encoded video file, irrespective of if it is stored on Blu-ray or HD DVD.

This is what early adopters arguing for the superiority of one side or the other don’t seem to get.

There never should have been a format war but for greed driving the split over who owned what intellectual property rights for the container.

And the container has no bearing on the consumer experience.

The whole lot of these clowns on both sides of the BD/HD DVD war need to get this sorted out before the Internet downloadable formats make them irrelevant to the future of HD video. Pieces are falling into place and new technologies are popping up, and that always has a tendency to displace what we previously thought possible.

Streaming online HD video is not yet here in a practical sense, but new services, methodologies, and technology are constantly cropping up. With each new discovery and development, ways to make better use of the existing Internet infrastructure or ways to upgrade what is in place, the Internet moves one step close to usurping physical media.

The dual formats can not go away at this point, but the format war can.

All that needs to happen is for the studios to publish on both formats and let consumers buy whichever disc suits their needs and quit trying to tell them which one to buy. While the senseless battle rages on, the Internet, like a 4000 pound elephant, is moving slowly into the living room.

Joe Schmoe, post: 333790
Exactly. A really good transfer will look great (even in standard def.) By contrast, a poor transfer will not benefit from the hi def format.

Indeed, some assume that just because that a format is high-resolution anything released on it must be great.
solomr2 posts on November 30, 2007 13:38
These guys are shopping for commercial and military deals… this is not consumer grade stuff.

Put one of these babies on a SR71, fly it over Iran at 50k feet, and in 1 minute of video you have a high-resoultion image of the entire country that you can take from cockpit to an analysts desk without conversion.

Similarly, you can use this kind of stuff for Geological and Geographic surveying activities. For example, the South Florida Water Management District (SFWMD) pays a fortune to have some commercial enterprise fly over the everglades to survey water flows and erosion. With something like this, they could lower costs 10-fold.
Gasman posts on November 30, 2007 00:52

Not to be nitpicky, but honestly that could easily be construed as a racial slur.:o (in the form, it is being used)
stratman posts on November 30, 2007 00:19

Can you imagine this? We can't get our crapola together with regular HD now leave it to the Japanese to stir the pot some more! They'll adopt it in the not too distant future, then in about 20 years time we'll get there. Bose will have it's format called Bo-ray, HD DVD and Bluray will be history, and we'll be using sugar cube sized, multi-petabyte or exabyte storage devices for the holographic movies we download from the net.
yettitheman posts on November 29, 2007 23:45
I should ADD:
“The eighteen-minute uncompressed UHDV footage in the NHK demonstration consisted of 3.492 terabytes of data, with each minute requiring 194 gigabytes.”