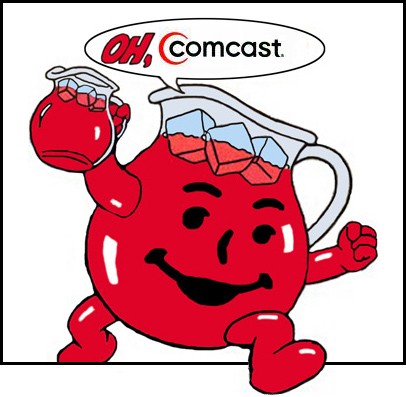 Comcast COO Steve Burke did an interview with TechFlash.com to air his views on the future of the bundled subscription TV model. He wanted to set the record straight as to why Cable and Satellite TV doesn’t need to adapt to change and a new business environment being set by Internet video. Burke sounds like a brontosaurus explaining why that light in the sky won’t affect his daily feast of tasty cycadophyte leaves.

Just last week Audioholics ran an article on the survey by InStat that identified that more of you are watching TV with a laptop at hand. It’s just part of a complete report by InStat intended as a guide for the content and media business. In its report InStat has some suggestions in light of recent budgetary constraints and competition from internet video streaming services. Part of InStat’s suggestions include: “Exploration of new hybrid “Lite” subscription TV services.”

But Comcast COO Steve Burke is pretty sure his company doesn’t need InStat’s advice. In the interview he said:

It sounds like Mr. Burke is intoxicated with Comcast flavored Kool-Aid. Does anyone believe Cable TV’s current subscription model will profit side-by-side with downloading or streaming content from the Internet? Wait until the market for Hulu or even Comcast’s own Fancast matures.

There is an interesting symbiotic relationship between Cable and Internet. Most of you Cable TV subscribers also get your Internet access from the same company. Late last year Comcast enacted a 250 GB cap on its broadband Internet service. This helps the company retain some control over the growth of online video, especially in HD.

Mr. Burke responded to the specter of a-la-carte program pricing. This is the practice of subscribing only to those channels or even individual TV programs that you want and not getting networks in bundles as they’re currently sold.

“ If a-la-carte consumption came along, then all of a sudden those (niche) channels (like Home and Garden and Golf Channel) were only viewed by 10 or 20 million people, they couldn't make it. Programmers have demanded that cable companies and satellite companies carry all of their channels for all of their customers."

So, Mr. Burke admits Cable and Satellite TV carries niche networks knowing they’re not economically viable and that almost nobody wants them. He goes on to add:

“I think the broadcasters and content companies couldn't survive doing (a-la-carte pricing) it. As a cable company, since we are so increasingly dependent on high-speed Internet and telephone for our growth, it might not be a bad thing for us. But for the content companies, it would be a terrible thing. They wouldn't do it. And they would do whatever they could to avoid it."

So, are we expected to believe Comcast won’t entertain a-la-carte pricing out of charity to the poor networks that might die? Mr. Burke could be the first Mother Theresa among Chief Operating Officers. Or maybe Comcast likes being able to charge people for stuff people don’t want and won’t change until they absolutely have to.

Comcast is already hedging its bet in the content streaming market with Fancast. Web-content is growing rapidly and becoming more sophisticated, it shouldn’t be difficult for niche networks to survive on ad-revenue as an Internet vid-cast. But you can bet subscription TV (Cable and Satellite) will do all it can to maintain the status quo. It’s interesting that Comcast says it’s not threatened by Internet video but at the same time seems to be hedging its bets. How else do you explain Fancast and its 250 GB data cap.

How long can this type of thinking in the TV industry survive before the asteroid of reality crashes to the Earth?

Discuss This Article
bm123 posts on March 25, 2009 17:36
I know of a friend who cancelled their cable service because all their shows were available online..hulu, on the networks websites, etc, and its a lot more convenient as well!
edmundsingleton posts on March 21, 2009 05:37
Niche Programing

Anyone interested in niche programing it seems that is what the internet is for as for the rest of us, the paying customer, give us what we want and nothing else.
Hipnotic4 posts on March 19, 2009 16:29

Wayde Robson, post: 539957
I hear ya. I'm sure network bundles won't go away completely. It's just about offering choices.

I do some “future” surfing through the guide and look for odd documentaries and click record - that's my only source of serendipity. Otherwise I rely on Internet recommendations for new shows or movies to try.

I hear ya. I'm sure network bundles won't go away completely. It's just about offering choices.

I do some “future” surfing through the guide and look for odd documentaries and click record - that's my only source of serendipity. Otherwise I rely on Internet recommendations for new shows or movies to try.
bandphan posts on March 18, 2009 19:32
Comcast = the worst in the industry.
Post Reply
See also:
About the author: