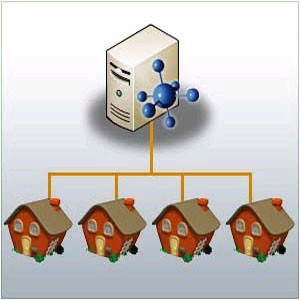 A Supreme Court victory for Cablevision Systems Corporation will translate into a huge win for all Cable TV companies. Hollywood, recording studios, sports leagues and the Screen Actors Guild have all lost their bid to block a new remote-DVR technology.

Soon, consumers will have a digital set-top-video-recording option at their disposal - remote-storage. It’s essentially the same conventional DVR, such as TiVo, that lets you record or time-shift programming. Only with remote-storage the hard drives are kept back at the Cable TV Company. The user will control the DVR functions by remote on a digital cable box in their living room. Commands pressed into your remote control, rewind, pause fast-forward or record, will be sent back to a central location. There, the Cable Company will store your programming for you.

This system of cloud-TV recording has advantages for Cable TV. The biggest is it’s cost effective to have all their hard drives in a central location where maintenance will be a fraction of the cost of renting out individual DVRs. It also gives Cable a big leg-up on competing Satellite TV companies.

When Cable Companies launch usable cloud video recording systems they’ll have a system that Satellite operators cannot match. Satellite TV users will still have to use local hard drives stuffed inside their set-top-boxes which cost the satellite provider to maintain.

In opposition to this bold new move by Cablevision is the Copyright Alliance whose members include Movie Studios as well as Cable and TV Networks. They argue that remote DVR amounts to unauthorized rebroadcasting of their content. They see it as another form of Video on Demand (VoD) and want to see similar licensing agreements in place.

"It's clearly an important chapter in the history of digital television," Standard & Poor's analyst Tuna Amobi said. But the new system will take "a few years to materialize. Right now the focus is on trying to get up to speed and get this technology beyond the test phase.
Perhaps in the next decade, remote-storage DVR would start to make set-top boxes obsolete.”

Gary Shapiro, the president and Chief Executive Officer of the CEA, applauded Monday's ruling by the U.S. Supreme Court saying:

What’s it mean to us?

When Cablevision finally gets the remote-storage DVR system off the ground we should hope it’s more responsive than current VoD systems. It’d be difficult to skip commercials and get back into your show with any latency between commands from the handset. If latency from my current VoD system from Rogers is any indication of performance – I’d rather just have that HDD local, thank you very much.

What will this do to advertisers? The future already looks grim for the conventional TV spot. Advertisers will have to find clever new ways to insert their brand into your TV. Expect more product pimpage than ever before in your favorite prime time show. We’ve already seen product-advertising built into the dialogue of TV shows. Perhaps you’ve heard Blackberry or Treo promoted by characters on CSI. Does anyone remember Christopher pitching The Departed Soundtrack Album in the SUV with Tony in the final season of the Sopranos?

But it could be so much worse! Imagine if advertisers find a way to get TV shows to sing their gag-inducing jingles. And they already sing on reality TV. Just thinking of our civilization languishing in the gutter of an Ad-Jingle Special American Idol – makes me want to “Reach out and Touch Someone”… but not in a nice way.

admin, post: 592241
A Supreme Court victory for Cablevision Systems Corporation will translate into a huge win for all Cable TV companies. Hollywood, recording studios, sports leagues and the Screen Actors Guild have all lost their bid to block a new remote-DVR technology. Soon, consumers will have a digital set-top-video-recording option at their disposal - remote-storage. It’s essentially the same conventional DVR, such as TiVo, that lets you record or time-shift programming.

Good news even if I will not use one most likely. Put those Hollywood guys in their places.

If this takes off, the cable companies will need huge data storage capacity.
Post Reply