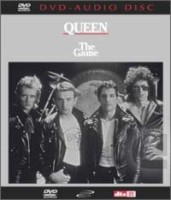 One of the aspects of Queen that excited me the most when reviewing this DVD-Audio disc is their predilection to use unusual sounds in their compositions. To me, 5.1 surround is a perfect venue for some of the more esoteric of Queen's songs. While I am by no means a rabid fan, I've always respected Queen's music and have owned a number of albums in the past. I had never heard The Game in its entirety and was anxious to jump into this review when the DVD arrived at my doorstep.

Discs are listened to a minimum of twice with at least a 24 hour separation between the listening sessions. During session one, notes are taken on the subjective experience of the implementation of the DTS 96/24 5.1 surround sound mix (in this case) along with notes on other features. During session two, the original notes are compared and expanded upon during the listening experience. Additional listening sessions are added as needed. Before each session, speaker calibration is checked using an SPL meter and the test-tones on the receiver, in this case the Denon AVR-3805 .

1) Play The Game -R ock Ballad - The beginning of the song has a THX-like opening which "wows" you with the surrounds. There were a couple of nice, well thought out, moments where the music would circle around the room especially just before the guitar solo.

2) Dragon Attack - Drum heavy Rock song - There is a real nice drum solo that makes you feel like you are actually IN a drum. Freddie's voice is firmly anchored in front while the guitars and music are all around. One bizarre decision was to have the guitar solo start from behind then quickly move up front followed by random moves around the room (around minute 7). Some of the surround effects were OK but overall the effects seemed out of place and more than a little forced. There was an a cappella section that I found very nice.

3) Another One Bites the Dust - Rock/Pop - In stark contrast to the rest of the album, Freddie's vocals were clear as a bell and firmly planted in front of me. I felt myself sinking back into the couch because I felt like Freddie was leaning into me and singing inches from my face. This is the song that epitomizes why I was expecting Queen to be a great choice for 5.1: lots of random ambient sounds that could be mixed into a myriad of different speaker combinations. This song was well executed and audibly stunning. Most casual buyers will purchase this DVD for this song, and they won't be disappointed.


4) Need Your Loving Tonight - Rock/Pop song with a Folksy feel - The nice thing about this song is that, while most of the album sounded like a concert in a large venue, this was more like the band was performing in a coffee shop. It felt like Freddie was in front with a guitar with backup singers surrounding all of us. Nice effect.


5) Crazy Little Thing Called Love - Elvisy blues/rock - This track featured lots of echo in Freddie's voice almost to a distraction. It sounded like Freddie was singing in a closet. Whenever the backup vocals would kick in, Freddie's voice was totally overpowered. I could clearly hear the sound of the pick on strings, kind of a high, harmonic ring as the pick slides ever so slightly down the string as it crosses it. This was also evident on the previous track, but it really stood out here.


6) Rock It (Prime Jive) - Slow start into a nice Rock song - There were some good use of surrounds with the backup voices and electric organ. There were also some random sounds that were used effectively and provided a good counterpoint to the mostly dispersed sound of the rest of the song.


7) Don't Try Suicide - Upbeat Pop song - I have to say that an up-tempo song about suicide is a little disconcerting at first. This song sounds almost like a commercial jingle. During the refrain, they repeat "don't do it," I felt that these lines could have been spread out around the room more (or at all). There was the potential for this song to be the showpiece of the album, but it wasn't.


8) Sail Away Sweet Sister - Rock Ballad - There was a nice ocean effect at the end of this song, otherwise, it is simply enveloping with few specific surround effects.


9) Coming Soon - Heavy drum Rock tune - Mostly, the backup vocals overpower Freddie's. There were some nice random effects. There is a lot of repetition in the song that could have benefited from the 5.1 format, but were untapped.

Generally this album is mixed to sound like a concert. I describe it as a "concert" sound not because of the presence of an audience, but because of the timbre of Freddie's voice. There is quite a bit of echo in Freddie Mercury's voice on most tracks and you feel very enveloped by the sound. I'm not sure if the echo/reverb in the lead vocals were part of the original mix or if they were added later.

I found that on a number of tracks, the lead vocals were either subdued or even overpowered by the rest of the vocals or music. This is an unacceptable flaw in the mixing of this DVD.

I don't really feel that many of the songs lent themselves as readily to 5.1 as I was hoping the Queen material would. Cut 3 was perfect for 5.1 and subsequently is the best sounding song on the album. I felt that cuts 7 and 9 had a lot of untapped potential. Some of the songs on the album (especially cut 2) sounded very forced with surround effects that sounded out of place and distracting. Others (especially cut 6) used the surround to the best effect, emphasizing the concert feel of the album.

The Low Frequency Effects (LFE) are pretty much absent from this DVD. This, I feel, is more a function of the original recording date rather than anything else. There is one nice LFE during cut 3 but that is pretty much it.

Extras on this DVD are few. During playback, the lyrics to each song are displayed synchronized with the music. There are notes describing the mixing staff and process, a short 8 picture gallery (one picture of each band member, two album release posters, and two group pictures of the band), and a list of websites. I find it hard to believe that there was not more material that could have been included on this disc.

One might take from this review that I did not like this DVD. Not true. I feel like the DVD did not lend itself well to a 5.1 format. For the most part, the mix emphasized a more concert-like feel of being caught up amongst the sound. This was mostly handled to good effect. Of the songs that did lend themselves well to the format, Track 3 - Another One Bites The Dust was handled extremely well and is clearly the best mixed song on the album.

One really, really irritating problem I had with this DVD is that when I skipped to #3 (my favorite), it didn't start at the beginning of the song; It clipped the first note. I checked all the other tracks, but it only did it with #3.

A friend of mine has been a fan a Queen for years and spent an afternoon listening to few of the DVD's I had for review. He had this to say about the remix of The Game:

The Game is not one of Queen's "effects" ladened albums. In prior works, stereo separation and special sound effects marked Queen's pioneering style. The Game comes off uniform in style, presenting more as a collection of rock and roll songs than an experiment in audio technology and innovation. By its very nature, this album is built for two-channel stereo. The effects that have been translated into "surround" no longer fit the character of the album, and sound out of place. While some tracks were done more tastefully than others, the album as a whole, suffers. The lack of original effects makes for far less driving force to manipulate this album, unlike News of the World or Night at the Opera where there is a bounty of separation and sounds effects to play with.