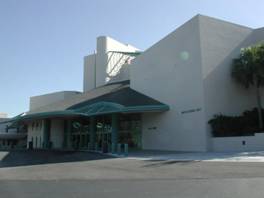 It's not often I go to see live concert performances. This is for a variety of reasons: they are usually too loud and crowded, and the bands rarely live up to my expectations or what I have come to cherish on their CD recordings. There are a few exceptions, of course. U2, Genesis, Yes, Steely Dan, Marillion, The Rippingtons, and last but NOT least, The Pat Metheny Group. This would be my fourth time attending a Pat Metheny Group World Tour, having twice seen him at one of the best local concert venues, Ruth Eckerd Hall in Clearwater Florida. For those of you not familiar with this Hall, let me tell you how cool it is. The acoustics are among the best I have ever heard for live performances, the seating is very good, and the parking is well organized with ample exits.

We started the night out like we would for any great event: great friends, great food and drink from a local favorite Tio Pepe's.

Shameless plug: If you're ever in Clearwater you have to stop at this place for the absolute best in Margaritas and Sangria, and the food isn't too shabby either. After we had our fill of fresh fish and spirits, we were all juiced up and ready to make our (fortunately) short journey towards what promised to be an unforgettable night of acoustic and electrical guitar ballads, percussion and much more.

Moments after the audience took their seats, Pat Metheny opened with a quiet introduction and the distinct melody of the song " This is not America ". Cuong Vu, Grégoire Maret, and Nando Lauria walked through the crowd on their way to the stage playing toy instruments. Meanwhile, Lyle Mays, Steve Rodby, and Antonio Sanchez took their positions on stage in preparation for another memorable event.

The Pat Metheny Group didn't waste any time. They were punctual as always, and took few breaks which only lasted long enough to switch instruments or positions. They dug right into their new CD titled "The Way Up". Not having heard this prior to the show, I was most eager to hear what was in store for us. They played about 40 minutes straight, the bulk of which was comprised of three very long and energetic songs. I liked what I was hearing! Antonio Sanchez absolutely smoked on drums. You can tell that Pat found the right blend of musical talents after Antonio Sanchez and Coung Vu came on board for their last tour "Speaking of Now". These guys had it going on musically and it showed in their musical arrangements, energy and enthusiasm they displayed on stage. This was the Pat Metheny Group I had grown to love over the years and elevated above all other musicians because of their uniqueness and signature sound that others dared to copy but none replicated.

In my opinion you either understand them or you don't. Their music has meaning and passion. Two chord bubble gum smooth jazz it isn't. Instead, it is a kind of music that doesn't quite fit into the Jazz, Rock or New Age genre but defines its own. It's experimental to say the least, but its roots are classic jazz and the musical talent is without peer. In a society driven by 3 minute pop songs, fast food and shady politics, it is nice to know there is an escape from it all. I soon found my escape when I heard the Pat Metheny Group break out into the title track "Are you Going with Me?" from Off Ramp , one of my all time favorite albums. This song is so chill and can cure all but the worst temperaments if you freely let yourself go and give into its melodic ballad of synthesized jazz guitar.

As is customary in any Pat Metheny concert I have attended, he uses various types of guitars and often switches from one to the other frequently within the same song. It just goes to show you how meticulous he is at getting the right sound to set the proper mood of the song. Stage handlers frequently supported Pat by setting up the right guitar(s) at pivotal points in the show.

Pat Metheny, Cuong Vu, Gregorie Maret and Antonio Sanchez made key solo contributions on several occasions of the show. The most memorable solos were from Antonio Sanchez. He took his drumming to a new level with lightening fast one-handed drum rolls while he hit an assortment of toms, and other percussion instruments quicker than my eyes could track. He really added a new dimension to older Pat Metheny songs that was both refreshing and enjoyable.

Another highlight of the show for me was their awesome rendition of the song "Minuano (Six Eight)" from another classic album of theirs Still Life Talking . I got my first taste of Pat Metheny with this CD back in my early days of High School. To me this album conveys the essence of what Florida life is all about. It's become a hallmark tradition for me to pop in this CD when cruising downtown towards Clearwater Beach with my sunroof open. The Pat Metheny group brought back so many of these fond memories when playing this song that I couldn't help the chills I was feeling. This was the first time I heard them play this song live and I was pleased they included it.

Plenty of group solos were present among the group, including memorable piano guitar ballads between Lyle and Pat, and classic jazz jams between Pat and Antonio - much like they did in the last tour Speaking of Now . After the first part of the show, the band glowed with a sense of accomplishment as the audience handed them a well deserved standing ovation (there were actually several throughout the course of the show). 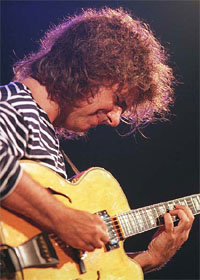 Pat Metheny didn't forget to play the song that made him famous that we all remembered from the Publix Christmas commercials "The Last Train Home". Regardless of its commercial appeal, I still love this song almost as much as I enjoyed those commercials during such a festive time of the year. This was yet another song that reminded me of my first introductions to the Pat Metheny Group and they did a superb job playing it.

During the course of the show, as the mood shifted to the more acoustical side of the band and things began to unwind, I couldn't help but wonder if they would play "Roots of Coincidence" again like they did only a few years ago in the Speaking of Now World Tour. The first time I heard that song live, it raised the hairs on my arms. The dynamics and almost heavy metal side of Pat invoked a sense of rebellion in me. The bright lighting flashes combined with the hard guitar jams of Pat and yes Lyle, were invigorating. Sure enough I caught Pat picking up his signature electric guitar with red LED's and I knew he would be stirring things up again by playing this song. He did so at just the right moment when people least expected it, but I knew better. What a great performance! Pat's guitar solos were as good as ever and the sound was excellent, though a bit louder than I could handle. Thankfully I had some ear plugs in my pocket that I called upon two or three times during the show. As a reviewer, I cannot afford hearing loss so I felt it was a valid precaution even if I looked a bit funny wearing florescent orange ear plugs. 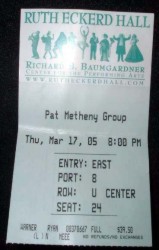 The Pat Metheny Group provided a spectacular performance that was just short of three hours. This is something fans have come to expect and appreciate. Overall the show was great. I felt it was a bit more mellow than his last tour, but also felt somewhat more personal and endearing to me. It was a real treat seeing such a guitar legend up front and in person yet another time. Though he is in his early 50's now, you would never know it. His appearance and music are still both very fresh and young, though his wisdom conveys itself in his playing style and mannerisms towards the audience and his associates. As always, I walked away from his concert completely satisfied and energized to refresh my CD collection with some of his new material. I think I will pop in my Speaking of Now Concert DVD tonight to recapture some of the magic that his music conveys in my own venue - my home theater room. All I need now is to mix up some tasty Sangrias.