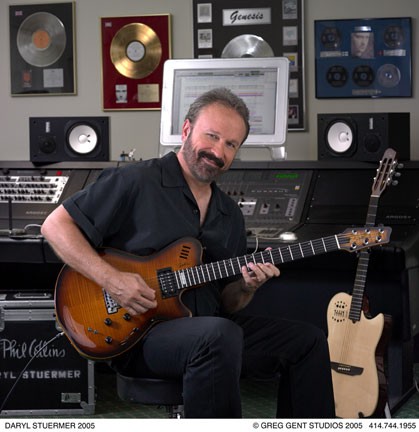 Daryl Stuermer was born in Milwaukee, Wisconsin, November 27, 1952. Daryl has been Genesis' lead touring guitarist since 1977 and Phil Collins' lead guitarist since Phil busted out into his solo career in the early 80s. Daryl has been a key player on all of Phil Collins world tours and most of his recordings throughout the years, most notably Face Value, No Jacket Required, But Seriously, etc. Perhaps one of his most known works with Phil was on the song “In the Air Tonight”.

Click here to hear our podcast interview with Daryl Stuermer

In the midst of Daryl’s touring with iconic bands like Genesis and Jean-Luc Ponty, he still managed to maintain a thriving solo career releasing seven solo recordings (six since launching his own Urban Island label in 1998). Go is his latest album which released on April 23rd, 2007 is a high energy recording whose influences were inspired from his recent reunion with the 1973 jazz fusion band he formed called Sweetbottom.

With the Genesis tour coming this summer to Europe, followed by the USA in the Fall, I felt it was an opportune time to interview this venerable guitarist and get the scoop, perhaps even dig him for a song list (wishful thinking).

I am a “formerly” self taught musician that started at age11 and took lessons from a jazz guitarist for one year when I was 15 and learned to read music.

In the early 70s when I was 19 years old, I formed a band called “Sweetbottom” with my brother on bass. Later on, I joined up with Jean-Luc Ponty to tour and record four albums such as Aurora, Imaginary Voyage , Enigmatic Ocean and Civilized Evil.

Are you excited to be playing with Genesis again?

Yes, but have been wondering why it took so long. I didn’t know until 1994 that Phil Collins wasn’t doing Genesis any longer. Phil casually said to me on the road “Oh you know I am not doing Genesis anymore”. I am glad to see they are back together again and looking forward to touring.

You toured with Genesis for nearly 30 years, and even composed on Phil’s solo albums, so why is it Genesis never made you a full fledged member of the band?

First off, I was never lead to believe I would become a member of Genesis. Phil Collins always referred to me as a “permanent part time member” which I am quite happy with. The problem with adding more members to Genesis, is it becomes a more difficult process to writing music once more people are involved. Since1978, Genesis has been a three man band with all music written right there as they recorded it in the studio. They found this to be a more efficient and enjoyable process as opposed to the way they were doing things as a five piece band.

Do you remember how to play the old Genesis stuff?

{Daryl laughs} What is old these days? Genesis' most recent stuff with Phil is circa 1991 so by today’s standard, even that can be considered old.

I am fortunate to have the gift of musical memory retention. Once I play the song once or twice, I rarely forgot how it is to be played and it all comes back very quickly to me if I do forget a few bars or melodies.

Yes, I am quite partial to “Home by the Sea” and “Domino” while I also enjoy doing the guitar solo for “Firth of Fifth”.

Is the play list going to be different for the European Tour vs the US Tour?

We may add a song or two for the European shows, but overall the song lists should be fairly similar.

I recall Tony saying the tour will remind people that Genesis does more than the simple pop songs on the radio and Phil recognizing that fans aren’t huge fans of the medleys. Yet a recent interview I heard you stating there would be more medleys. Please explain?

There will most definitely be medleys of old classics such as “In the Cage”, but I cannot comment on the song list at this time.

Well OK, Daryl, I won’t force it out of you, but I would however like to add a comment for Genesis to consider. In my opinion medleys of long songs can work quite well, but they fail when combining short pop songs like “Invisible Touch, That’s All, Lamb Lies Down on Broadway, etc. I hope the medleys performed in this up coming tour will be more like the ones done in the 70s and early 80s.

I understand what you are saying, but please realize, I don’t choose what goes in the medleys, I just play as asked.

I heard that Genesis will appear on a VH1 Tribute to Rock, please confirm?

This years’ VH! honors will pay tribute to rock bands such as Ozzy Osbourne, Genesis, Heart, and ZZ Top. It all goes down at the Mandalay Bay Events Center in Las Vegas, Nevada on May 12th. I believe VH1 will be airing the taped version of the show on May 24th.

Is it true Genesis is opening for the Live Earth Concert?

Yes, Genesis will open London's part of the 24-hour, 7-continent Live Earth concerts on July 7, 2007 with a 20-25 minute set before rushing off to perform their own headlining show in Manchester that evening. Check out the Genesis website for more information.

Let’s talk a little bit about your most recent solo work. Go is a bit more progressive than your work in the past. What was your influence? I wanted to go back to my roots – progressive rock fusion. This album is more edgy and higher energy than my previous albums. The focus was electric guitar that favors the rock side of the musical spectrum.

After sampling all of your solo work recently, I definitely attest to the fact that this is a high energy recording. I am particularly fond of track #7 “Heavy Heart” as it’s a tune that just begs to be cranked. This CD has been burned into my Yamaha MusicCAST MCX-2000 music server and added to my Workout playlist – great stuff!

Thanks Gene. Well I am off to Switzerland to rehearse with Genesis.

Sounds great, Daryl. I am looking forward to the up and coming Genesis tours. I am hopeful you guys get a chance to player a wider diversity of older Gabriel era Genesis material in addition to the more modern long songs typically not heard on radio broadcasts or played on tours since the early 80’s. Best wishes to you and the great folks of Genesis.

Click here to hear our podcast interview with Daryl Stuermer