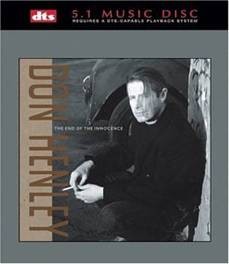 Boy, I have to say that I wasn't exactly excited to see a Don Henley DVD on my doorstep, ready for my review. Not exactly my cup of tea. But then I started thinking about it and I realized that I knew at least three songs on the album and that Don Henley was a part of the Eagles Hell Freezes Over 5.1 disc that is well regarded for its audio performance.

Discs are listened to a minimum of twice with at least a 24 hour separation between the listening sessions. During session one, notes are taken on the subjective experience of the implementation of the DTS surround sound mix (in this case, except track 1 - mixed in DTS-ES) along with notes on other features. During session two, the original notes are compared and expanded upon during the listening experience. Additional listening sessions are added as needed. Before each session, speaker calibration is checked using an SPL meter and the test-tones on the receiver, in this case the Denon AVR-3805 .

1) The End Of The Innocence - Ballad - Absolutely wonderfully mixed. This track is an example of why albums should be remixed into 5.1. You are enveloped in the sound, wrapped in the melody, cradled in the warm glow of a perfectly implemented 5.1 transformation. The one truly surround effect was what sounded like a metal brush on a cowbell that would hit a few times, each on a different side of the room. The sound was clear and the surround effect did not detract from the envelopment of the sound. Listen and realize that 5.1 doesn't have to be about dramatic sound slapping you across the back of the head or chest thumping bass It can be about being so encompassed in the sound that you unconsciously close your eyes, lean your head back, and forget the whole world.


2) How Bad Do You Want It? - Pop/Rock - Apparently, pretty bad. After the previous track, this one was like a slap in the face: Saxes sound like harmonicas (electric harmonicas if there is such a thing) and the whole song sounds, well, plastic. If I could find a better word, I'd use it.


3) I Will Not Go Quietly - Rock - While this track was a big step up from the previous (clear and realistic cymbals and other instruments, vocals and music really well balanced), I found it to be, well, empty. That envelopment of sound that I had experienced in track 1 was just not as present here (or in track 2 for that matter). The nature of these tracks perhaps would be better served in a concert milieu.


4) The Last Worthless Evening - Ballad - Yeah, man, it is back! The same effect as track 1 is back and is totally welcome. I was so lost in the totally perfect vocal/music balance that I forgot to take notes on this song… every time I listened to it.


5) New York Minute - Rock Ballad - Mostly, see track 1 and 4 though it is not quite as good (I wasn't transported to another place). I found the bell sound at the beginning was really well done. The muted trumpet solo was very clear (hmm, contradiction?) and extremely lifelike. I'm a huge fan of trumpets used with mutes and this sounded like it was in the room with me.


6) Shangri-La - Funk/Rock - For the most part, I thought this song was nicely executed. The drums were used to nice effect at the beginning of the song (it must have been tempting to add a LFE track, it's a testament to the integrity of the mix that they didn't). The guitar/bass duet at opposite sides of the room was well done though the cymbals were a little overpowering at times.


7) Little Tin God - Reggae-ish - MAKE IT STOP! Can you say listening fatigue? I can.


8) Gimme What You Got - Rock - Ok song but a bit fatiguing at moments because of an overemphasis on the higher frequencies. However. the opening of the track is very well done.


9) If Dirt Were Dollars - Rock - Nice envelopment in this boring, repetitive, and bland song.


10) The Heart Of The Matter - Ballad - Mostly, see track 1 and 4. This track made me feel like I was in the recording studio with Don Henley and surrounded by backup singers. The only problem I had was that the guitar picking, while lifelike, was mixed from side to side. This always brought me out of the "in the studio" feeling.

There is a lot of variation on this album. The parts I liked, I REALLY enjoyed, the parts I didn't, well, you get the picture. Track 7 is just plain wrong. Axiom's are known to be "revealing" speakers and track 7 did not benefit from it. It was really bizarre how the audio quality varied so greatly from track to track. I can't say that the original recording wasn't to blame but I can say that, if it was, perhaps either drastic steps should have been taken to improve upon the original, or the "good" tracks should have been pulled off and compiled into a Greatest Hits album. Some of the more "empty" tracks could have benefited from a live performance presentation which could have used the sound of the audience to bolster the track.

First, reread the description of track 1. Understand that while surround effects can be very dramatic and awe inspiring, they don't have to be. In fact in some cases I believe it is to a detriment to the original recording to force surround effects where they are not warranted. This album is a good example of how surround can be used to envelop the listener without distracting from the listening experience and conversely demonstrates how a forced surround effect such as in track 10 can damage an otherwise well executed song. On this album, no matter how grating the track is, the surround effects were mostly done very well. While you may or may not like how the song sounds (see Audio Quality ), you will assuredly not complain too much about how the surround effects were implemented.

When I first inserted the DVD into my player and it started playing immediately, I realized that it was audio only and included no video. At first I was disappointed and planned on slamming the album for it but the more I thought about it, the less it seemed to matter. CDs don't have video and we still like them. If the point of the 5.1 conversion is to increase the quality of the sound, any video extras are icing, not fruit filling. Personally, I'd rather the producers/creators concentrate on the sound not slapping together some half-baked video extras that I'm never going to view. Plus, it says on the cover, "5.1 Music Disc." It does have the lyrics printed on the jacket. The only "complaint" I have is that when you fast forward or rewind the disc, you get a hiss of static through the speakers. I thought it was weird and annoying but this is the nature of searches on most DTS discs on players without an auto mute feature.

Talk about hit or miss. This is the quintessential 3 star album, " may include some moments of brilliance offset by small flaws." Where this album succeeds, it does so brilliantly, and, with one exception, its flaws are small. If you are purchasing this album solely for the popular tracks, you can bump the rating up a star. If you ever plan on listening to track 7, bump it down. It falls squarely in the 3 range because, let's face it, how many times have you bought an album only to find that the tracks you like are the only good ones on the album? This album is by definition average.