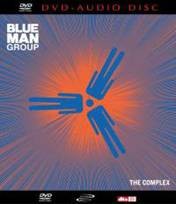 I was quite excited when I opened the package containing this DVD and saw its contents. I've never been to a Blue M an Group performance, nor have I heard one of their recordings. I knew, however, from their Intel commercials, that their Industrial/Tribal/ Techno sound would be a perfect match for the 5.1 format. Usually, I list next to each song the type of song it is (ballad, drum heavy rock, blues, etc.) but for this album, suffice it to say that it is composed entirely of Industrial/Tribal/Techno songs that marry rock vocals and instruments with the traditional percussive Blue M an sound.

Discs are listened to a minimum of twice with at least a 24 hour separation between the listening sessions. During session one, notes are taken on the subjective experience of the implementation of the DTS 96/24 5.1 surround sound mix (in this case) along with notes on other features. During session two, the original notes are compared and expanded upon during the listening experience. Additional listening sessions are added as needed. Before each session, speaker calibration is checked using an SPL meter and the test-tones on the receiver, in this case the Denon AVR-3805 .

1) Above - This song starts off with a dulcimer (has a harpsichord-like sound) which quickly is joined by a myriad of percussion instruments. It's light and airy with a mix of heavy tribal percussion sections.

2) Time to Start - There is a really nice subtle use of the subwoofer in this track. At first I didn't really know what it was until I felt my head start to pressurize from the ultra low frequency note. It's a really subtle effect that shows up in a number of tracks on the album.

3) Sing Along (featuring Dave M atthews) - This slower ballad is really the most accessible track on the album. Good LFE again. I found myself completely lost in this song's all encompassing nature. This is also my son's favorite track.


4) Up to the Roof (featuring Tracy Bonham) - One nice effect is that while I was reading the text (a review of the text is featured below in 'Extras'), they quoted the lyrics of the song. Right as I was reading the quoted lyrics, the vocalist was singing that exact part. At first I thought it could have been coincidence but then it happened over and over each time I played the album. There was also a funny line about inventing metaphors. The verses of the song are very recessed into the front of the soundstage. I found myself almost leaning forward following the vocalist only to be slammed back when the powerful refrain grabbed me.


5) Your Attention - Once again, a nice subtle LFE in this song. There is a lot of good use of the surrounds that is not overt. I was particularly impressed by the low voices speaking from multiple directions.


6) Persona (featuring Josh Haden) - There is some really nice LFE present again in this track. This slower tempo song features a haunting whisper of a vocal that sounds like it could be someone's internal monologue.


7) Piano Smasher - This track starts with really low LFE and carries it through the song. It essentially can give your subwoofer a good workout. This track leans more towards techno than rock.


8) White Rabbit (featuring Esthero) - This track makes one of the more specific use of the surrounds so far. I can see how people could disagree as to the judgment used in remaking "White Rabbit" as an Industrial/Techno song with a Bjork sounding vocalist. I did like the way they used the airpole (a boat antennae whipped through the air) to simulate a helicopter. This track is more interesting in how they tried to emulate the instruments in the original recording rather than anything else.


9) The Current (featuring Gavin Rossdale) - This very repetitive rock song seems out of place with the rest of the album. The heavy guitar sections seemed to be overdone and to me the whole song sounded formulaic.


10) Shadows Part 2 (featuring Tracy Bonham and Rob Swift) - Again that airpole "swish" sound is really well integrated into this song. The track ends unexpectedly (perhaps looking for Part 3?). The pairing of the airpole and the turntable could be overlooked by the unobservant listener, but becomes a nice comparison to the more discriminating.

11) What is Rock (featuring Arone Dyer & Peter Moore - To call this track a marriage of the Blue Man sound and Rock would be omitting the shotgun nature of the implementation. The track shifts between Blue Man and Rock with all the subtly and grace of a cat in a swimming pool. Enough said.

12) The Complex (featuring Peter M oore) - This is a good slower ballad with a melodic opening building to a heavier rock finish. The ending is reminiscent of some Sonic Youth songs (without the distortion). Once again, very subtle uses of the surrounds in this track.

13) I Feel Love (featuring Venus Hum) - According to the text on the screen, this track uses Blue M an instruments to cover an entirely electronic song. Interesting, if you are a fan of the original by Donna Summer. I particularly liked how effective the Blue M an instruments were in recreating an entirely electric sound. The percussion solo at the end was particularly nice.

14) Exhibit 13 - This track shows an excellent use of subtle sounds emanating from all around. There is also a lot of good LFE. I especially like the low voices reciting mundane statements floated hauntingly around the room.

This album is crystal clear. Axioms are known to be revealing speakers (some say bright) and this album really allowed them to do their work. The Blue M an instruments sound remarkably like synthesizers and other electronic instruments. A casual listen will have you thinking that you have it all figured out, until you listen closely and hear the whoosh of air at every percussive note. Suddenly, you'll realize that you're not hearing electronics and you'll start listening to each note very carefully. If you're like me, you'll go through the credits on the jacket trying to find the keyboard player, to no avail. What you will find is an abundance of percussion and guitar players.

The key is that, even with the multitudes of things being beaten on, the sound never gets muddy. I think this is why, at a casual listen, the music sounds electronic - it's almost too perfect. It's also why you can listen to the album over and over again, each time hearing something new and different.

If I had to pick a word to describe the surround implementation of this album, I'd have to say subtle . Where some albums seem like they are shoved into the 5.1 format, this album gracefully embraces it. If anything, the surround is too laid back. Sitting in the room with a friend virtually guarantees that you will miss 3/4ths of the surround effects. To be truly enjoyed, this album needs to be experienced in a comfortable chair, completely free from distractions, preferably in the company of a good single malt. Every time I thought I had the album figured out, I heard something new and exciting.

The downside is that this is not an album that is going to "wow" your friends. The first reaction to a casual listen of the album by a friend of mine was, "This is boring, let's listen to something else." The surround effects don't slap you in the face. You won't find yourself spinning around thinking there is someone over your shoulder. But you will spend many listening sessions discovering new depths to songs you thought you knew.

Extras on this DVD are numerous. It has a "making-of" video, two music videos, lyrics, drum breakdown, credits, and speaker placement advice. The drum breakdown extra gives a choice of listening to #5 Your Attention Please with only the drum line or the entire song. This really highlights my assertion that much of the surround effects in the album are nuanced. During the drums-only portion, cymbals and drum notes careen around the room dramatically; but during the full playback, they seem to be peeking out from behind the guitar and other percussive instruments. Also, during the speaker set up extra, they note that if your speakers are wired out of phase, you should get someone to help you that knows what they are doing. Good advice.

During playback, the author of the track is displayed with little snippets of text. M ost of the text is explanatory of the track being played. While this may be valued by some, I found it extremely irritating. It's like going to a gallery and having the artist standing next to his work explaining each painting to you as you view it. I come from the school that says your work should stand on its own merits and that part of what makes it art is what the viewer brings with them. Having the Blue M an Group explain their work felt like my eight grade English teacher telling me I had interpreted a poem wrong. "But you said there are no wrong interpretations of poetry," I exclaimed - and it's off to the principal's office again. Perhaps, this type of explanation would be better left to the "making-of" section.

Rather than including explanations, perhaps it would have been better to include a montage of imagery with each track. Each montage could be used to assist the listener in understanding the track while not being as blunt as a written description. This, of course, is only my opinion and is not reflected in the ratings below.

This album is a favorite of my not-quite-two year old son. I must have seen the music video to "Sing Along" 30 times this weekend. He is a little freaked out by the Blue M en, so I get to hold him during playback, but at the end he always says, "Again?"

Subtle, subtle, subtle. The whole album is subtle - which is ironic considering it was created by blue guys beating on homemade instruments. To make a long story short - get this album. Unless you really HATE techno sounding music (and even if you do), this album will make an enjoyable addition to your collection.