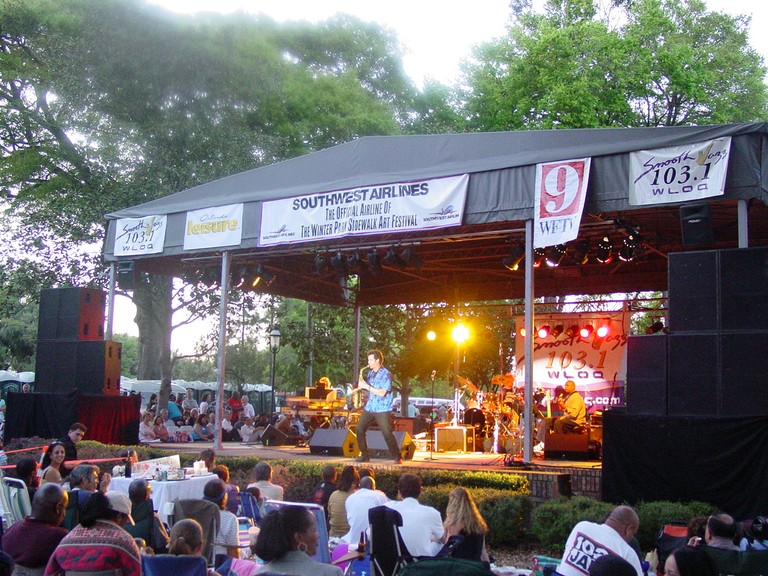 This year commemorated the 45th Annual Winter Park Sidewalk Art Festival which started on March 19th, 2004.  Over 1,000 award winning artists world-wide try to enter and display at this show, but only 250 are actually selected.  I have been attending this wonderful event for 15 of its 45 years and each year, I continue to be amazed at the artwork, and the performances from headline jazz greats, at least until recently.  For 12 of the past 15 years I attended, I've had nothing but an awesome time as I witnessed staggering performances by Larry Carlton, The Rippingtons, Richard Elliot, Michael Franks, David Sanborn, Chick Corea, Richey Kickliter, Special EFX, BWB, Michael Tomlinson, Bob James, Kirk Whalum and an extensive list of others. There were concerts, such as the year of Bob James, where I was literally brought to tears because it triggered memories of my childhood, especially when he played "Angela" the theme song from Taxi. That song was a benchmark for my growing up years where I would gather around the TV with my family and watch the show and laugh for 1/2 hour.

These past performances and entertainers are what made the Winter Park Sidewalk Art Festival so wonderful, at least for me, and kept me coming back year after enjoyable year.  But the past two or three years, it seems that WLOQ (the hosting "smooth jazz" station) and the Winter Park Art Festival committee, have given way to the age of "smooth jazz" leaving out any promise of lumps.  Last year's headliner was "Bad To The Bone" which I quickly renamed, "Bored To The Bone." Even my 8-year old classically trained pianist daughter had a knick-name for their performance which she called, "Bored to the Brain." Their sub-average performance was as "smooth" as it comes, so I thought.

This year we were at least privileged with the opening act, Saxophonist Eric Marienthal.  His music was refreshing and very enjoyable and reminded me of Richard Elliot's work when he performed on the same stage several years earlier.  The crowd began gathering for the Jazz shows very early in the day, and space was at an all time premium.

Eric Marienthal entertained the masses while we relaxed in leisure listening to his funky sax.  The bass player was truly amazing, as we discovered during his bass-solo.  Man that guy could slap it.

After the wonderful 1-hour performance, my anticipation for the headline act grew as I became impatient while enjoying my wine as I awaited more song.  After all, I was told that Jonathan Butler plays guitar and has a tremendous voice where he sings South African rhythms and rhymes in many of his tunes.  I quickly thought of other jazz performers who sing and play such as Steve Oliver (who played here two years ago) and George Benson thereby making my impatience even higher during my 20-minute wait.  After the band set up, WLOQs "smooth" DJ's introduced Jonathan Butler, who quickly took the stage with his nylon string left handed guitar.  The first two songs were enjoyable indeed as he performed some of his hits with that famous African twist.  But beyond that, he began what wouldn't end; which for me and my family was the most painful rendition of "smooth" jazz we had to endure.

The crowd was so tightly packed, that there was absolutely no way we could pack our belongings and bail, so for over 1-hour, I tormented through this painful bore while Jonathan spent 10 minutes repeating; "Do You Love Me."  I couldn't help but shout in replay, "Do You Bore Me!"  Being only 20-feet away, I'm sure he heard the message.  Even so, he continued with other mundane repetitious songs which progressively bored the crowd.  So much so that people all over became restless and were engaged in conversation instead of bothering to watch or listen to the mundane performer.  The only highlight of the "performance" was when Eric Marienthal came back on stage and funked things up for a couple of songs which helped take the edge off Jonathan's boring debacle of jazz.

I'm sorry to say that if this is what is becoming of the WLOQ's sponsorship of the Winter Park Art Festival, then I guess the 45th Festival will be my last.  The art still remains beautiful to look at, the experience of sitting on lawn chairs and engaging in hours of conversations away from the TV and phone will certainly remain as fond memories and pleasant times for me, my family and our close friends.  But as for seeking entertainment at this Festival, I'll just stay home with on of my DVD Concerts remembering the times where WLOQ (and most other "Smooth Jazz" radio stations) actually played and supported real jazz which had at least some lumps.  I guess the age of "smooth" is just not my cup of tea.

I can certainly appreciate the fact that things have "gone-up" in terms of how much concerts cost to put on.  But I feel compelled to point out that this has not hindered free jazz concerts with actual musicians in local cities such as Tampa or Jacksonville.  For example, Jacksonville is putting on their annual Jazz Festival at the end of April and first of May 2004.  Check out the Jacksonville Jazz Festival lineup, and oh by the way, it's FREE.  This free three day event includes headliners such as George Benson, Joe Sample, Deanna Witkowski, Branford Marsalis, Guitars & Saxes (Warren Hill, Marc Antoine, Jeff Golub and Euge Groove), Keiko Matsui, Grover Washington Jr., Big Bad Voodoo Daddy...and TONS more.  Oh, did I tell you, it's FREE for all three days.  Unlike the bore that was WLOQ's interpretation of jazz during their three day lameness, this Jacksonville even will satisfy any music interest and taste, and certainly mine.  If WLOQ and the city of Winter Park can no longer afford the headliners, why don't they turn to the thousands of starving Jazz musicians that would bring down the house for nothing more than an airline ticket?  Why turn totally "smmmmooooooottthhhhhh" as they have when there are obviously people who want differently?

I remember when I fist moved to Orlando about 15-years ago, there were free jazz concerts like this as part of the Orlando Jazz Festival.  I vividly remember seeing the late great Miles Davis and every other legend imaginable over about three of four years.  Then Orlando sort of dropped this festival and it sort of transferred into being part of the Winter Park Art Festival which was then supported by WLOQ and their sponsors.  For many years it did well in taking the place of the Orlando Jazz Festival as seen by the list of performers listed above.  But sadly, it has deteriorated into nothing more than a bore-fest with musicians who's music should remain in the elevator.

But in the end, I guess what really matters is not the performers, or lack thereof, but the time with the friends and family.  With that, please enjoy my fond memories which enlightened the otherwise dull concert.