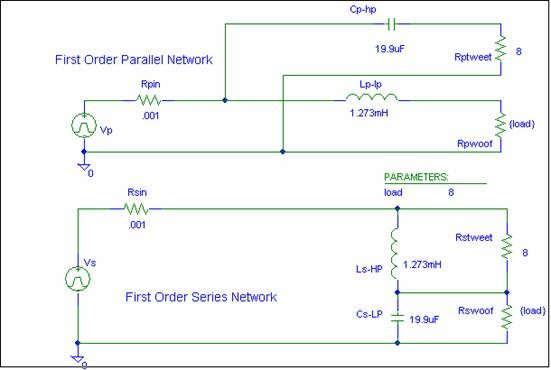 Despite many of the myths that surround series networks and their acclaimed superiority over conventional parallel networks for loudspeaker design, both networks can be designed with identical transfer functions if the load impedance remains constant. Most of the claims regarding series networks are either grossly overstated or blatantly wrong and may cause deleterious effects on system performance. As with all aspects of design, there are compromises that must be made, and it is impossible to make an informed decision if you are unaware of the facts.

This article is intended to show that there are no greatly enhanced features in a series or parallel network - if properly designed their performance is essentially identical in terms of response, phase and (by extension) transient response. It is unwise to claim that one type of network is superior to the other, when simple logic dictates that if amplitude and phase response are the same, then all of the filter's other characteristics are also the same.

There are other factors than just the response, and this is where the differences between the network topologies exist. Each has good and bad points that must be considered.

Illustrated above are equivalent series parallel first order crossovers with 1kHz crossover points for a fixed load. Note, resistive loads were used in order to minimize analysis variables. Complex load impedances, typical of a loudspeaker, will be covered in latter parts of this article.

As we can see both series and parallel networks have identical frequency response and 1kHz 3dB points for the HP and LP filters when the loads are held constant.

By varying the woofer impedance ± 2 ohm from the nominal (8 ohms), we observe the nominal 1 kHz -3dB point of the LPF change from 759 Hz to 1.25 kHz, respectively. Since this is a parallel network, the changing woofer impedance has no affect on the tweeters crossover frequency as the HPF is electrically isolated from the woofers load impedance. However, for the case where Rpwoof = 6 ohms, we see the overlapping bandwidth between the HPF and LPF decrease while we see it increase when Rpwoof = 10 ohms.

For the series case, when varying the woofer impedance ± 2ohms from nominal (8 ohms), we see a slightly less 3dB point variance in the LP filter response, with a convergence at about ½ a decade past its corner frequency. We now also have variance of the HP filter response. This in turn has less affect on overlapping bandwidth changes between the two drivers since they somewhat track each other (an advantage to the series crossover).

Summary of Series vs Parallel Networks

In the parallel network, only the driver whose characteristics have changed is affected. In the series network, however, the change is somewhat complimentary.