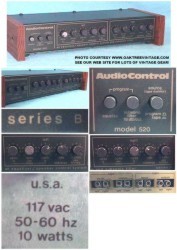 In this, Part 3 in the series, I'd like my 30+ year journey through speaker design to illustrate how much of the knowledge was gained over long periods, by testing combinations and by following what others were doing to improve their systems. Hopefully it will become apparent that the journey of our industry in audio has been and continues to be an ever-fascinating learning experience…

In Part 1 of this series we discussed my good fortune in being introduced to speaker design when working within a very neutral listening/speaker test room. The neutrality of that environment led to a couple of young engineers experimenting with a statement-style speaker from the get go; the Marantz Imperial 9 tri-amped version. Combined with our neutral room, that single speaker pair allowed us to;

Once we had the tri-amped version where we wanted it, we began trying, as closely as possible, to replicate the sound in a passive crossover, "saleable-to-consumers", version of the Imperial 9 tri-amp. The Marantz/Superscope management had briefly looked at our tri-amped version and made two observations; a) since Marantz was predominantly known as an electronics company no one would pay $1000(!) each which is what the tri-amped 9s would have had to retail for (in 1973). And b) the 36"H x 24"W x 16"D proportions of the tri-amp version "looked like a refrigerator" which "no wife would want in her home". So our marching orders were to reconfigure the 9's proportions and "get the price under $500 each."

After a couple of months we were able to get a pretty fair sounding representation of the Imperial 9 tri-amps in a passive version. Each of the four 3.5" midrange drivers were given their own critically damped enclosures and we kept the active version's identical crossover frequencies of 600Hz and 2800Hz using 12dB Butterworth filters on the woofer, high and low pass sections of the mids and on the tweeter (The Linkwitz-Riley crossover alignments did not exist at that time.). Using simple Zobel circuits, we designed a constant impedance-style network in which the impedance only varied between 4 to 8 ohms for the speaker's entire bandwidth. And finally, with the exception of the bottom end which could not be EQ'ed in the passive version, we were able to keep the frequency response to a respectable 40Hz (in-room) - 17KHz ± 1.5DB

Know what? When we directly A-B'ed the tri-amp 9's versus the passive version, it was immediately obvious that the passive version lacked the firm control and damping on the bottom end. And, from roughly 200Hz through 5000Hz, there was definitely a loss of the easy and open articulation on vocals and instrumental harmonics as they transitioned through the crossover regions. This is one of the reasons I've always remained a big fan of bi-amped or tri-amped speakers with electronic crossovers.

When I left Marantz in 1973 I purchased that single pair of tri-amped Imperial 9's. In the years that followed I continued to try to improve their sound. The four big 10" woofers directly coupled via 14-gauge cable, only 2 meters long each, imbued the 9's with great dynamic range. Note also, that the passive version of the 9s had a 94dB/2.83V(1 watt @ 8 ohms)/1 meter sensitivity. So the dynamic range aspect of passive Imperial 9s was never an issue either. (And though I've not heard it personally, it would appear that Audioholics' Prez Gene DellaSala 's four 10" woofer RBH T-2 Reference system must have a similar surfeit of dynamic range also.)

Once I got the 9's home and into a 3000+ cubic foot living room-with-attached-through-an-archway-dining room it became apparent that the woofers and the Marantz Model 250 amplifier used to drive them were both woefully inadequate when driven hard. One hundred twenty-five watts RMS/channel gets used up very quickly when you've got +6 dB boost dialed-in at 30 Hz. That and the fact that I loved to demo the heartbeat off of Pink Floyd's Dark Side of the Moon at full volume. (I actually cracked the window glass in the 1934 beach house I was renting at the time.)

By 1975 I was in full audiophile mode so I made a couple more changes to the tri-amped 9's. First drivers to go were the two 2" phenolic-ring cone tweeters. At the time of their design these tweeters were very good for their price/performance. But soft domes were starting to be introduced which sounded much smoother from the 9's 2800Hz roll-on crossover point, and soft domes went out to 20KHz minus only 2 dB. The only problem with soft domes of that era was that most had fairly high free air resonances (~ 2200 Hz) so it was quite easy to blow a tweeter. Blown tweeters were okay with me because Japan was constantly improving their silk dome designs in those days and it was fun to try out new samples. I eventually ended up using a Foster-Culver (then Culver-Tonegon) design which had been widely copied throughout the Far East. In fact, in the late nineties, I used a much-modified version of this same Japanese silk-dome driver in designing the M1 Active speaker for Alesis Studio Electronics. Staying at roughly $4 over its 25 year life span that particular tweeter is what has made me a die-hard soft-dome devotee. (It's been only recently that hard dome designs have emerged that I believe are genuinely excellent. I'll talk more about these two different design philosophies in part four of this series.)

In 1977 I moved into a house with a very small living room. Not being able to position the speakers well out into the room, and sitting back only about 10 feet, the standing waves generated by the 9's four 10" woofers became very apparent. Fortunately, 1977 was the year AudioControl introduced their first product, the Model 520 equalizer.

A revolutionary product for its time, the 520 had five rotary controls for each channel with frequencies centered on 36Hz, 60Hz, 120Hz, 1KHz and 15.5KHz. It also had an 18dB/octave subsonic filter at 20Hz. With the 520, I found that, though the frequencies were fixed and the filter Q's were wide, I could dial out the overbearing bass and the now way-too-forward midrange to very respectable degree. What an amazingly forward thinking product! In 1980 I went to work for Kenwood Electronics and was able to purchase a pair of their first so-called " High Speed Direct Drive " amplifiers. The Kenwood L-09M mono amps when rated at 300W RMS at 8 ohms, 20Hz - 20KHz with no more than 0.02% THD. We measured them at 380 watts 20Hz - 20KHz into 8 ohms! The L-09Ms where among the first amplifiers which extolled the virtues of a high damping factor. They were rated as having a damping factor of "200 into an 8 ohm load and 250 into an 8 ohm load without speaker cable". (Seems specsmanship has always ruled. Just how do you connect a speaker to an amplifier without using any cable?) These 47 pound mono behemoths came with their own 1 meter length of wire which consisted of "seven flexible stranded (and insulated) wires of .23mm diameter each".

Marrying the Kenwood L-09Ms to the Imperial 9's two 10" woofers per side solved the long standing problem with the 125 W/channel Marantz Model 250 amp running out of juice so quickly. Now I started blowing up woofers! So I went back to my friends at Foster Culver and they kindly agreed to hand-build some more robust woofers; four-layer coils on a phosphor-bronze formers with high-temp lacquer pushing a stiff, thick paper cone with circumferential decoupling rings. These new 10" drivers did the trick! I could now not only play the system more loudly for longer periods but I could also hear a greater "ease" (there was still headroom left!) in the bass portion of the system when played at moderate to moderately loud levels.

What I learned from this experience is, that for unfettered-sounding dynamic range, you must have more than "just adequate" power pushing woofers whose cones are more than "just adequate" as rigid pistons (thicker, more rigid paper cone was the key in this case). It is only then that you can begin to "hear through" the previous limitations of the system and listen to a more revealing rendition of what is contained on any given recording…

Now I found I had a new problem. The system sounded tight and fast with snappy bass when the AudioControl 520 was out of the system . But the system turned to lazy mush when the 520 was re-inserted. It turns out that the 520 had op-amps in the design which totally obliterated the benefits of the faster design incorporated into the Kenwood "High Speed" L-07CII control pre-amp and L-09M power amps (each of which had discreet components). So the 520 had to go and I was now stuck once again with more exacting room placement as my only means to attenuate those pesky standing waves.

Once I found the op-amp problem in the AudioControl unit I knew what to listen for with other systems. This is how I quickly became aware that these slow slew rate op-amps were exactly the same problem inherent in most dealers' speaker switching systems of the day. That was the truly sad part of this discovery; that most mid-fi dealers were unknowingly degrading the sound of the manufacturers' loudspeakers that they demonstrated!

The example above is one very important instance wherein the tweak dealers of the day who eschewed the use of speaker switchers were correct. Their ears had told them. The tweak dealers also knew early on about proper speaker placement. Many had learned about placement by following the sixties and seventies Stereophile articles of founder and chief tester J. Gordon Holt.

So much for the background on having grown up with a system already possessing great dynamic range. Let's go forward now and see how troublesome it can be to build a system "backwards". That is, start with not enough dynamic range with a loudspeaker/electronics/room combo, and try to go forward from there…