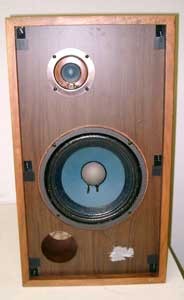 Initially, the Audioholics topic that impressed most was their multi-part series on cables. After reading that series just about anyone who really cares about using the cable path as a legitimate upgrade had a fairly good handle as to which new cable might offer true sonic improvements versus a "snake oil special" which somehow filtered the audio signal.

My first thought about even needing a "reference" cable was when I started at Marantz designing speakers in 1971. Back then the speaker cables we used in the lab/sound room were what I eventually took home and used in all my systems for the next twenty years. They were nothing special. Fourteen-gauge Belden twisted pairs. "Stranded copper" was the only description. I believe each conductor had around 50 stands.

All I was told at the time I started in the lab/listening room was that famed audio pioneer Bart Locanthi had consulted with then Chief Marantz Engineer Dawson Hadley about setting up a speaker testing facility. And that this 14 gauge Belden was the wire that Locanthi had specified to be used as a standard for all speaker development.

My education in entering audio at that time didn't end there. Bart and Dawson had appropriated a large 28' x 35' x 8' room at the Marantz manufacturing facility in Sun Valley , CA where they were building the last U.S.-made Marantz-branded electronics.

The speaker lab/sound room had an 8"H x 3'D riser running completely across the 28' front of the room. The riser and the rest of the floor had a heavy shag carpet. On the right side wall was paneling with what appeared to be randomly spaced 24"W x 15"D shelves which were used to hold display models of the Marantz gear. The left wall was almost completely covered with a heavy drape. And in the back was a huge custom-made walnut credenza which held the Marantz house system consisting of a Model 20B tuner, Model 32 preamplifier and Model 250 power amplifier.

We did all of our speaker testing in that same room. Bart had determined a specific spot just off the left-to-right center and just forward of the front-to-back center of the room. We would set a 36"H dummy speaker box on the floor in that exact location, every time, no deviation. All of our speakers under test would be precisely positioned on the empty speaker box.

The test gear was the best for its day. On a mobile steel shop cart we had a Bruel & Kjaer audio oscillator, strip chart recorder and vacuum tube volt meter. We'd place a microphone on a stand one meter away from the device-under-test and hit the auto test button on the oscillator. We stood quietly in the back of the room while the test ran…..

From the beginning I was taught that Bart Locanthi's main goal in designing a good speaker was to design an accurate speaker. And by that he meant get the frequency response as flat as possible; with the individual drivers first, then with the system. Next, look at the system's impedance curve. If you had to tweak the crossover a bit so that the system never went below 4 ohms, then do it. This was the only time a bit of linearity in frequency response could be given up. 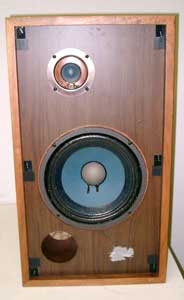 The Marantz Imperial 6 was the first speaker Dawson had designed after Bart Locanthi had completed the lab/listening room set-up along with teaching his speaker design methodology to Dawson. We speaker novices would listen to the Imperial 6 all day long in between setting up other tests. It was a paper-cone 10" two-way with a phenolic ring (edge) cone tweeter. The woofer had a doped cloth surround and all cabinet parts where of ¾" veneered particleboard. In the lab the Imperial 6 measured ± 1.5 dB, 60Hz to 17,000Hz. It had a real walnut cabinet and retailed for $129.00 each. Guess what? It didn't sell worth beans.

What did sell at that time was the Marantz Imperial 7. The 7 was a marketing-driven design all the way. A 12" 3-way, in the same size box as the Imperial 6. The Imperial 7 was Marantz's answer to the hottest speaker of its day, the JBL L100 Century. Marantz marketing asked us to give them a design which would "jump out" from the L100 on the sales floor. And, oh yea, they wanted it to retail for $299 each versus the L100's $399 each.

The L100 measured fairly flat and had a die cast 12" basket. We knew our stamped steel framed woofer had more sensitivity than the JBL plus it was considerably cheaper. And putting it in the same size box as the Imperial 6's 10" meant that the Imperial 7's 12" would roll off starting at 80 Hz. Fortunately for us, a ported 12" pumping out lots of 80Hz air sounded to most consumers at the time like a whole truckload of bass!

The answer to making the midrange and tweeter drivers "jump" was even easier. Don't use any crossover component to roll off the midrange. That way both the mid and tweeter would be working in the same 3KHz - 10KHz region and we'd get a huge bump. (Never mind the cancellation effects which would limit the Imperial 7's ultimate high frequency response to a pathetic 12KHz before it headed straight down.) 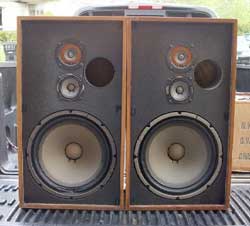 In the end Marantz' marketing ploy was very successful. The Imperial 7 sold in huge numbers and the Imperial 6 sort of faded back in the model line-up. For a short time, my Locanthi-Hadley basic precepts of technically correct speaker design were a bit tarnished. Here I was at the beginning of what I had hoped would be a wonderfully challenging and enjoyable engineering career. And I had to look forward to speakers pre-designed by marketing?

Fortunately that situation was short lived. A well-known early audio pioneer named Henry Kloss was starting a new speaker company. In 1972, Kloss was so certain that he had designed the best price/performance speaker of its day that he started his company with only one product. The speaker was The Large Advent, a 10" two-way design.

Henry was not only a great speaker designer, he was a better marketing man. The Large Advent received glowing reviews from the enthusiast magazines of the time. The same magazines who had given our Imperial 6 a rather tepid "it's a pretty good speaker" review a year earlier.

So we bought a pair of Advents. We measured them. They were good. They measured almost as well as the Imperial 6s. The main frequency discrepancy with the Advents was at their 1800Hz crossover frequency. 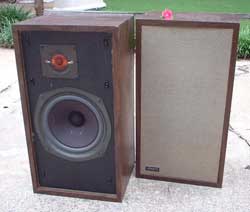 Henry had custom designed a cloth dome tweeter which had a 1" dome in its center but with a huge 1" cloth annulus surrounding (and part of) the dome. So to get down to 1800 Hz what the audio pioneer had designed was a 3" cloth-dome tweeter! In measuring the system it graphed out showing two very narrow, high Q peaks then dips on either side of the 1800Hz crossover. Other than that Henry's system had about the same smooth and flat frequency response characteristic as the Imperial 6.

We listened to both the Imperial 6 and The Large Advent in mono (the Model 32 preamp has a an L + R setting) on the 8" riser in our lab. Only by A-B'ing both speakers, and knowing exactly where to listen, could we pick up the very slight smearing effect that the Large Advent had at the crossover frequency. But when we listened above 8KHz and into the high extreme-treble region it was Henry's soft dome all the way. Was it ever smooth!

My idealism has been vindicated. Thanks to Henry Kloss' talents of great speaker design combined with even better marketing. Flat frequency response was back as my first prerequisite as we started a one and a half year quest to design a high-end statement model for the Marantz Imperial series.

This is where the quest for a flat response super system gets interesting. I hadn't been on the Audioholics site for a while and decided to look through the Discussions. The Loudspeakers forum title sucked me in. And the first thread that caught my eye was one titled Speakers: When is good enough, enough? It had been kicked off by a jeffsg4mac back in May.

Fascinated, I printed out the entire thread. In his initial "When is enough, enough?" email Jeff explains by model number his (excellent) Paradigm surround set-up. Then goes on to say, "I am in the process of treating my room and so far the sound I have is nothing short of amazing."

The thread continues for a month with many others relating incidents of dealer's "acoustically treated listening rooms" making speakers sound good at the dealer's then not so good once you get them home.

Others suggest the sound of live music concerts as a reference. And midway through the thread, Jeff, sounding a bit frustrated saying "I have no doubt that I could upgrade and achieve a different sound but would it be a better sound?" He then talks about double-blind testing being a possible solution but postulates (incorrectly) that with the advances in speaker technology the last 10 years or so there probably wouldn't be much difference if testing similarly priced moderate-to-high performance speakers.

Dr. Robert Dean then brings the thread back in the proper perspective when, before describing his (apparently incredible sounding) custom designed home system, he states, "Get your listening room acoustically correct first, otherwise, you're whistling dixie."

Bravo to all participants of this thread! You are all correct in surmising that, when talking about wringing the maximum sound quality out of a system, that it is the speaker-room interface above all else that will determine your degree of audio satisfaction. So, the bad news is that if you don't have an acoustically neutral, and therefore complementary, "flat room" to begin with, upgrading your speakers or any other component will only make the system sound "different". Never better.

A couple of days after reading the "Speakers: When is enough, enough?" thread, Gene DellaSala put a short notice on Audioholics asking for writers. I sent him off my resume and Gene called me the next morning - I hadn't written for magazines for over twenty years but I told Gene I'd really like to start off by taking a shot at answering jeffsg4mac's question. Gene said okay, then suggested it might help me get up to speed reading his RBH Sound T-2 Signature Series speaker system review.

I excitedly emailed Gene back the next day about the remarkable similarities I saw between Shane Rich's RBH T-2 speaker system and the tri-amplified Marantz Imperial 9 reference system that we had developed over 30 years beforehand. The foundation for the tie-in though, the true clincher was the at-the-listening-position frequency response that had Gene measured in his room. It is virtually identical to the far-field frequency response we had measured for the tri-amplified Marantz Imperial 9 in our Bart Locanthi-designed listening lab over thirty years before!

This tells me that when Gene is describing the sound of an upstream component or cable through the T-2s that that their descriptions are pretty dead-on… except for the bass.

Gene's at-the-listening-position frequency response graph does show what looks to be at least a +15 dB(!) bump centered at 40 Hz. This indicates that the T-2's four 10"ers subs have more than enough combined piston area and power to produce prolific room gain. If that curve could now be flattened out I'm willing to bet that Gene would report another quantum leap in low bass articulation and extension as well as overall system musicality.