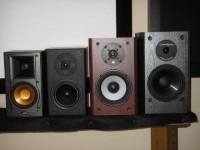 More often than not a question pops up in our forum about speaker impedance and the result of connecting multiple speakers to a single amplifier. Thus we have prepared this introductory tutorial to help clear up some of these questions.

The most common ways of hooking up more than one speaker to an amplifier channel are:

There are pros and cons to each method which we will discuss herein.

To understand the differences, we must first explore the very basic principle of how electricity flows through a circuit.

A loudspeaker isn't a simple resistance because it is an electroacoustical-mechanical device which is usually governed by a complex passive crossover network comprised of inductors, capacitors and resistors. Thus the speaker system presents a complex impedance which varies with frequency and power level. "Complex" here means impedance is a vector quantity possessing both phase & magnitude.For simplicity sake, we shall model our system's impedance magnitude only, ignoring phase . As an example, let's look at an impedance curve (or modulus of impedance) of an actual loudspeaker (the Onix x-ls).

The impedance minimum 0f 6.56 Ω at 42 Hz indicates the vented box tuning frequency. There are two other local minima, found at 164 Hz (6.386 Ω) and 3.4 kHz (4.97 Ω). That the first two minima are proximal in magnitude indicates an efficient reflex action. The large impedance peak, found at ~ 850 Hz arises as a result the interaction of the crossover network's high- and lowpass sections, setting up a parallel resonance. The impedance phase swings between +39° and -54° across the audible spectrum. With a lowest magnitude minima value of 4.97 Ω, the system nominal impedance (per IEC standards) value would be 6 Ω.

As you can see in our diagram above, we have connected Zspk1 and Zspk2 in series with our amplifier (Vs). Using Ohms law (1) we can calculate the following relationships:

Equivalent Impedance also known as the Thevenin Impedance where we short our voltage source (in this case our amplifier) to calculate the total load it will see from our two speakers connected in series.

For simplicity, we shall use identical speaker loads from the speaker we showed in the above example.

Thus by connecting two speakers in series, the amplifier now sees double the load impedance. But how does this translate to power delivery?

To calculate voltage drop through each load, we apply Ohms law: (1)

Next we apply Kirchoff's Voltage Law (KVL) which dictates the sum of the voltages within a circuit must equate to zero.

Thus we get the following relationship:

Let's assign some arbitrary numbers to solve for the variables in our equations.

First we must solve for current in the circuit so we can calculate our voltage drops to each load.

Now we can solve for our load voltages using Ohms law (1):

Of course a more simplified method known as the Voltage Divider principle can be used for calculating voltage across loads in series circuits. Here is how we can quickly solve for Vspk2:

Using KVL we check to see if the sum of our load voltages equal our source so that the total voltage summation in the circuit equates to zero.

as you can see we correctly calculated our circuit voltages as KVL was satisfied. Working up a circuit model using Electronics Workbench (EWB) confirms this.

But what about power?

To calculate our power to each loudspeaker, we must first develop a relationship for power. 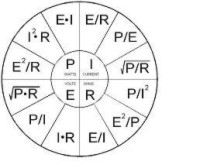 Since we calculated all of our circuit voltages and current, we can find power with either of the above equations. Let's use P = V^2 / R only we shall represent R as Z for our loudspeaker magnitude.

If we were to rework this example for just one 6 ohm loudspeaker connected to our amplifier, we would have seen the following power delivery to the loudspeaker:

Pspk = 10^2 / 6 = 16.67 watts since all of the voltage from our amplifier would have been delivered to the single loudspeaker load. Once again our model confirms this.

Thus connecting two speakers in series resulted in ½ the power consumption of just one speaker directly connected to our amplifier. This makes sense since the amplifier is now seeing double the load impedance and delivering only ½ the current.

So how does this equate to sound pressure levels?
Since we connected two identical speakers in series with our amplifier, each speaker only sees half the voltage drop across it thus as a result will see only 1/4 the power delivered to each speaker compared to a single speaker connected to our amplifier. The equivalent SPL now produced by each speaker is 6dB lower than if a single speaker were playing off the amplifier, for a combined overall -3dB drop. However, running two speakers effectively doubles the volume displacement compared with that of one speaker. Thus playback through the two drivers results in a 3dB gain. Adding this to the 3dB drop previously mentioned and the net overall sound pressure level will remain unchanged. Thus, playing two identical speakers connected in series off of a common amp (as opposed to playing just one speaker off that amplifier) results in no level drop, when compared to the single speaker case. This analysis, of course, ignores mutual coupling and any room-induced acoustical artifacts. However, if the speakers connected in series are not co-located and summing perfectly in the room, the net SPL would likely be up to -3dB lower than playing a single speaker off the same amplifier. The net SPL product in this case has a dependent relationship on distance between the speakers and frequencies they are destructively interfering in the room.

Modeling both a single-driver system as well as a series-wired, dual-driver system we see the dB spl plots are virtually identical. 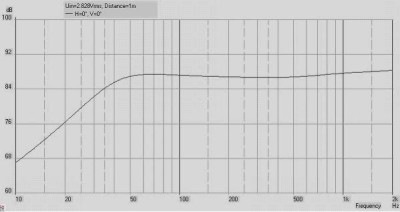 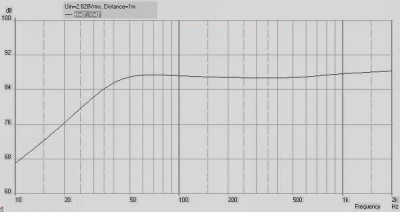