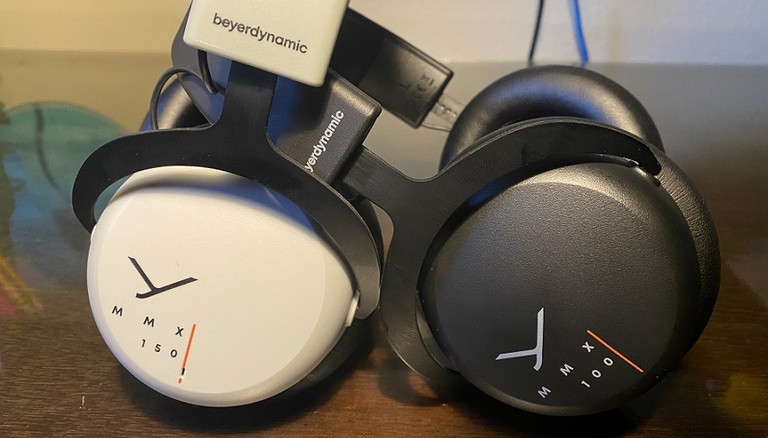 Gaming headphones serve a definite purpose. Quality audio in stereo along with a solid microphone that limits background noise. No one wants to be the guy with the bad mic in a gaming group. beyerdynamic offers two products to serve this purpose, both aimed specifically at gamers, but in a way that feels slightly ham-handed and over the top. Today, we will look at the MMX-100 (labelled as “The Hero”) and the MMX-150 (labelled as “The Specialist”). Both use technology that beyerdynamic has dubbed Meta, a gamer term used to describe the build or tools in a game that players find most effective.

Our beyerdynamic drivers are the meta pick in premium studio-quality sound. That much is proven by the MMX 100’s high-resolution sound. The 40mm drivers built into the MMX have been specially optimized for gaming by our acoustic engineers. This results in a clearer and more precise sound that can be heard across all genres: in FPS games you profit from a precise sound localization, which gives you a notable advantage in a range of situations. RPGs feel even more realistic thanks to the distinct sound. Gamers love to look cool. These units come in one of two colors–black or grey. Each has orange accent like the buttons and a thin line around the ear cushions. The packaging is pretty standard for shipping. There is no carrying case, but that seems fair for gaming headphones that will stay by your console. The microphone from both the 100 and the 150 detach so if you’re listening to music or playing a single player game, the mic is out of your way. I liked the black color better. The grey looks drab and the orange accents get lost, but against the black, they really pop.

According to beyerdynamics, both units are rated at 32 ohms impedance and have a dynamic range of 5–30,000 Hertz. The MMX-100 weigh in at 296g (10.44 ounces) while the MMX-150 sit at 304g (10.72 ounces) which is relatively light compared to similar headsets from other brands. The cables that are supplied with each unit have a braided sheathing that looks nice, but actually causes a real problem. More on that later. Regardless of the color that you prefer, both units are available in grey or black, so go with what you find most appealing. I like that beyerdynamics gave them an understated look. I can use these headsets in public without feeling like a Borg with a neon fashion fetish. My current Razor Beach set has overstated LED’s and sharp obtrusive angles with a nondetachable mic. One thing that I really enjoyed were the recessed inputs on the MMX-100. They offset the inputs behind the recess to ensure that you effortlessly plug the right cable into the correct input. This was a great idea. So simple, but something that so many companies overlook. The MMX-150 had the same configuration, but there is a 3.5mm plug for the mic, and a USB-c for the input, so it’s not so obvious.

The MMX-100 and MMX-150 are basically the same unit. Other than the connections, buttons and dials, they are exactly the same. That being said, they both ARE comfortable. The cushions around the ears never made my ears sore, even after two hours of gaming. The earcups have a large area for one’s ears to fit without getting some of that soreness that cheaper gamer headphones cause by pressing into your years. The headband stays in place and has ample padding. Both were a huge step up from the cheaper Razor Beach headphones I had been using in the past. beyerdynamic advertises them as being the same on the outside, with differences coming from the internal components. We have already talked a lot about the similarities so far in the review. Technically, they are more similar than they are different. They have the same frequency response and impedance. The controls vary slightly. The place where the MMX-150 would shine is when it is connected via USB to your console or computer. It comes with a standard USB connector. I game on a MacBook Pro (only USB-c for me!) or on a PlayStation 4 that is well beyond the 1.2 meters of cable that is supplied. I feel that not including a USB-C connector is behind the times. USB is nearly a legacy connector. But the MMX-150 has so much invested in that connector that NOTHING works without it. No mute button, no volume control. You read that right. Without the USB, I couldn’t adjust the volume of the headset. I had to do so on my computer or console. The dial placed on the headset is rendered useless. In this way, the MMX-100 has the clear advantage.

The mute button has a definite feel to it, and it’s easy to tell when you’re muted or not simply by feeling the button. The volume knob was sensibly placed, and I found the headset easy to use. The cables and microphone have a different configuration to help ensure that you plug each thing into the correct spot. That, to me, was a great touch. The design just made sense and I really appreciated that.

To find out if the $50 price increase is warranted with the MMX-150 I asked my friends to give me feedback on how I sounded with each. They agreed that the MMX-150 sounded SLIGHTLY better, according to their vote. When I asked if they sounded $50 better, the vote was no. But there was an issue with BOTH units that was a real problem, one that drove me nuts and generated complaints from my gaming partners – that braided cable. Whenever I moved at all, the cable would drag against my clothes, my cheek, literally anything. That would cause vibrations that both I and my partners could hear. Every. Single. Time. Getting complaints from your gaming crew because of your microphone is a reason to get booted from your party. It’s bad. This was a real deal-breaker for me. Had I purchased the units, I would have returned them. I am not sure why the sets carry the vibrations through the wire and into the speakers, but they certainly do. Both units had the same level of vibrations.

Later, while playing a video game, I plugged the MMX-150 in via the USB wire and a USB extension. I also plugged them directly into the controller. The MMX-150 when wired with the USB did give me the strongest performance. Sound was good and I could position where things were located in the game through the sound design. However, plugged into the controller, they were just as good. I didn’t find any true advantage over plugging into the console or controller other than having a volume dial, which I never really used once I set it.  What I didn’t expect was the lack of output from the MMX-100 when plugged into the controller. I found myself wanting to turn the volume up and the power just wasn’t there. This forced me back to the MMX-150.

As far as music went, both gave the sound one would expect from $100 headphones. I found the MMX-100 to be a bit bright for my taste, and the MMX-150 to be more muddy. While listening to the MMX-150, I wanted to put the 100’s back on. (In fact, I actually did). Being gaming headphones, it makes sense that beyerdynamic isn't focusing on music.  They spent their time on creating gaming headphones.  And they did a competent job at that.  However, neither headset were a slouch when listening to music.  I used the 3.5mm jack into my MacBook Pro.  I found that the MMX-100 was the better set for me as they were a little more bright.  The MMX-150 had more bottom end, but those tonal ranges to me were muddy.  This is, of course a matter of personal choice.  The performance statistics of both sets are listed as identical.  Same impedance, same frequency response.  If you're looking for music headphones, I am certain that there are others in this price range that will outperform, but if you want gaming headphones and occasionally listen to music, either set will serve your needs.

There are a lot of headphones in this price point like the EPOS Sennheiser Game Zero Gaming Headset which retails for $180. The MMX-100 is a fine unit, aside from problem with the braided cable, which, as I said, is a big deal. However, I love the fact that I can plug the unit into my PlayStation controller and get quality sound comfortably. Is it worth $100? Yeah, but there might be better units out there. The MMX-150 is the unit that stayed on my PlayStation, but not in the way that the designers intended. Having a cable run across the center of my room is not optimal. Had they made all these features available while plugging it into the controller, this would have been a stellar unit. Either way, you’re going to get a decent headset. Is this the greatest bang for your buck? Probably not. But they do the job for their price point.

Read the Complete Thread
tyhjaarpa posts on May 30, 2022 11:40
Interesting read even though they are not in price range I would look for. Have been using Beyerdynamics MMX-300 for a year now, mainly while working and some gaming as well. Must say that the MMX-300 exceeded my expectations for the sound and mic quality as well as the overall quality even though I replaced the velour ear pads with leather pads, just personal preference. Using the MMX-300 8 hours a day for stream/music and teams meeting and I must say that I'm really satisfied on them. They work really well for FPS games as well even though I have really limited free time to play any games.
gene posts on May 09, 2022 04:36
The gaming industry made more money in 2020 than sports and cinema combined! Audio company beyerdynamic wants a piece of the pie with their MMX-100 and MMX-150 gaming headsets. For $100 and $150 respectively, the beyerdynamic headsets are in a crowded field of established headphone companies.

Our reviewer points out a couple of critical issues and lack of features that makes these headsets non-ideal in some gaming situations.