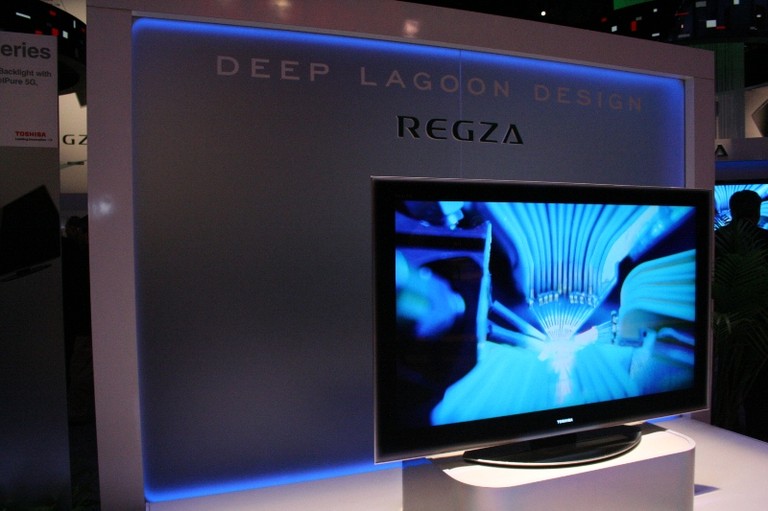 Toshiba is revamping their REGZA line. Across the entire 2009 new REGZA lineup Toshiba is offering consumers upgraded cosmetics, premium picture quality and next generation connectivity. What don't they offer? Thin displays. Some of the new features added to the new REGZA line-up include:

For 2009, Toshiba has created the new Deep Lagoon Design (their answer to the Samsung "Touch of Color" design), which will serve as the design identity for all of the new REGZA models, although each series will utilize a different application of the process. Deep Lagoon is inspired by nature and provides a three dimensional feeling to a clean flat design. Essentially, the black bevel fades into clear glass. New invisible speakers further enhance the sleekness of the design. Toshiba’s top-of-the-line SV670 Series also features the new Infinity Flush Front. Much like an infinity pool, where the water appears to go on forever, the beautiful Infinity Flush Front features a single sheet of glass with anti-reflective coating covering the entire front of the TV. Combined with Deep Lagoon, this creates a unique, clean and stunning appearance. We know this will cause some consternation with LCD purists that think that the LCD displays are less reflective to begin with and hate it when glass is placed on top but many manufacturers seem to be moving in this direction. The SV670U models with the single piece of glass across the front did look very nice though the "Lagoon" effect is really a fading black that is actually more and more widely spaced black squares. From a distance the effect is okay though a smoother blend would have looked better.

NEXT GENERATION CONNECTIVITY
Toshiba is adding a full range of new connectivity features to its new REGZA line up. In addition to enhancing REGZA-LINK (another name for HDMI-CEC), now with increased codes for easy connection to A/V components, the new line features InstaPort for faster HDMI switching between those components. Typically, when a consumer changes HDMI inputs, there can be a five or six second delay. With InstaPort, as soon as a user selects an HDMI source, it will connect in a fraction of the time (as long as you don't route everything through your receiver or an external switch).

More and more people are now downloading their content from the Internet. Therefore, the new REGZA provides consumers with ways to play content without an external content player. For example, the ZV650 and above series come with a USB Port allowing consumers to view their JPEG pictures, listen to MP3 audio, watch MPEG-1 & 2 video and even watch DivX Video. All of this can be done with a USB hard drive, or just a USB flash drive. There is also an SD Card Slot that allows easy viewing of JPEG digital pictures by simply taking the memory card from the camera and placing it in the TV.

The REGZA Engine
The success of REGZA starts with the high picture quality generated from its powerful engine. The processing power of Toshiba’s fifth generation engine, PixelPure 5G, is the heart of every REGZA. With a 14-bit internal digital video processor, gradation is increased, creating smoother, clearer images. Ongoing enhancements like the new 2D Chroma enhancement, 2D Luma enhancement, dynamic sharpness and adaptive noise reduction mean that PixelPure continues to lead in processing technology. PixelPure 5G is the heart of the REGZA engine, and Resolution+ super resolution technology is the soul, bringing images to life with complex image enhancement. Formerly referred to as SRT, the next generation Resolution+ is designed to overcome an industry wide issue of lower picture quality when watching less than Full HD sources. Using a proprietary processing system, Resolution+ improves 480i, 480p, and even 720p image detail for enhanced video quality when watching DVDs, TV channels, camcorder videos or even video games that output less than Full HD. Not just simple scaling, Resolution+ uses complex image correction to enhance the detail of each image, making everything feel like HD.

FocaLight LED Backlight with Local Dimming
Toshiba’s SV Series REGZA models also feature FocaLight LED Backlight with Local Dimming. Unlike simple edge LED, FocaLight offers a full LED matrix for better brightness uniformity. Even more important is that the Local Dimming system allows the LEDs to be controlled by zone, creating a significantly higher dynamic contrast ratio, where blacks are blacker without reducing the peak white brightness. The result is a new level of picture quality and depth that was not possible with standard backlight systems.

AutoView for the Best Settings Automatically
Toshiba’s enhanced AutoView feature helps ensure the best possible image quality at all times of the day. By combining an ambient room light sensor and incoming video content monitoring, AutoView automatically sets most of the TV picture parameters for you. Consumers don’t have to worry about a picture that isn’t set bright enough for the afternoon sunlight or eye strain from an overly bright TV in a darkened room. In addition to setting brightness, contrast, gamma, sharpness and color saturation, the newly enhanced AutoView can also adjust color temperature to adjust for changes in the color of home lighting or the surrounding walls. Not only does AutoView make life simpler and the picture better, but it can potentially lower power consumption, providing energy savings for the home.

All Gaming TVs
Every model in the new REGZA line is also a gaming TV with Gaming Mode for more direct video signal-to-the-screen allowing for faster game controller response. They also feature Native Mode to eliminate over scanning, allowing players to see more of the image, and therefore see their opponents faster.

See and Hear the Difference
In 2009, Toshiba has also focused on improving real world audio quality in the new REGZA line (since people that spend thousands of dollars on displays often use the internal speaker). One of the biggest issues with TV audio today is inconsistent volume levels when changing channels, or with commercials. Dolby Volume addresses this common problem by applying a sophisticated psycho-acoustic model of human hearing. This system delivers a level listening experience by automatically bringing down the volume of louder stations or commercials or raising the volume of lower channels or commercials to maintain the preferred listening level. Unlike other systems, Dolby Volume does this while retaining the perceived audio dynamics for consistent sound quality. The new REGZA with Dolby Volume makes the annoyance of inconsistent TV volume levels a thing of the past.

An Internet TV
Toshiba plans to introduce an additional series later in 2009 that will incorporate the new TV Widgets, enabled by the Widget Channel framework, which allows consumers direct and easy access to sources of personalized Internet content via their remote control. A rich array of content is available, such as local weather, top news stories, favorite sports scores, stock quotes, pictures, videos and more, and they are all just a click away. In addition, DLNA and Microsoft’s Extender for Windows Media Center capabilities will also be added to allow remote control of a compatible PC. With DLNA and Microsoft’s Extender for Windows Media Center, the user can access all of the multi-media content stored on their PC’s hard disc drive.