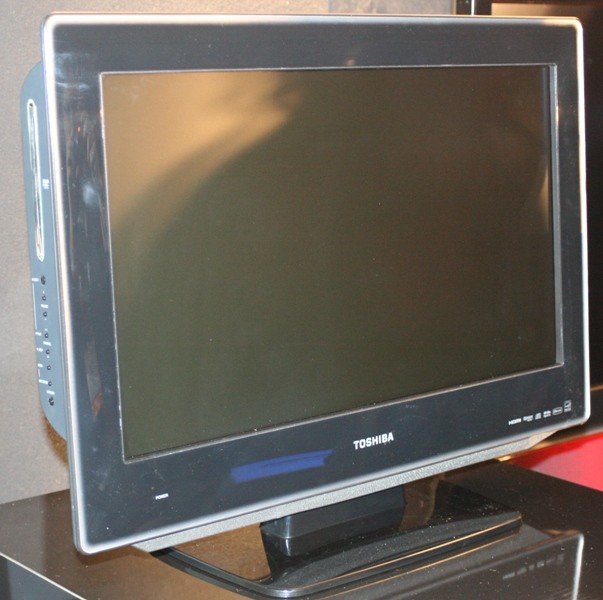 At today's press conference, Toshiba announced its 2009 series of LCD televisions with integrated DVD players. Toshiba’s new line delivers a nice combined entertainment device that works well for bedrooms, home offices or even kitchens (I'll take three). The new models are scheduled to ship during the 2nd or 3rd quarter of 2009.

Each of the new LCD/DVD combo TVs features a new contemporary design for the style-conscious consumer. The slightly translucent bezel design (they dub this "Deep Lagoon") adds an appearance of depth and the speakers are hidden to allow the TV to have a clean edge for better aesthetics (which WE dub "Formover Function"). The 15, 19 and 22-inch sizes are available in both high-gloss black or high-gloss white, offering consumers the ability to better match their decor.

All models feature a 16:9 widescreen LCD and provide WMA, MP3, JPEG and DivX playback media formats. Additionally, the majority of Toshiba’s lineup includes 2 HDMI inputs as well as PC inputs. This allows these sets to be hooked up to high-definition devices or be used in conjunction with a computer, while still supporting use with gaming and HDTV. Toshiba’s 2009 LCD TV Combination Models Include:

For those wishing to save $0.85 on their monthly electric bill, Toshiba LCD TV combination models will meet ENERGY STAR 3.0 certifications. Toshiba has also reduced the amount of paper used in its packaging for the 15, 19 and 22-inch models thanks to a compact folding stand design.